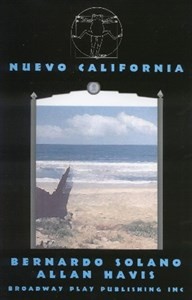 For information about Connecticut Repertory Theatre

Turn on any television and radio, or peruse internet news feeds and social media and it won’t be hard to find examples of racial tensions in the U.S.; they currently have become amplified, and most especially in our political climate of late. That complex sociological phenomenon of race and ethnic relations may be defined as the study of social, political, and economic processes between different racial and ethnic groups, affecting all levels of society; and all too often we find ourselves faced with a plethora of virtually unanswerable questions and nearly unsolvable problems.

Art in any form frequently serves as a basis for social and political commentary where it illuminates issues, creates dialog, and sometimes even portends what may come. Nuevo California, a dramedy which premiered in 2003, written by playwrights Bernardo Solano and Allan Havis, does just this. A multi-year project which utilized interviews with over two hundred San Diego, Tijuana, and Mexicali citizens, explores political, cultural, and spiritual themes. It is a futuristic, fictional take on a proposed binational city-state made up of bordering San Diego and Tijuana; this following an earthquake which swallowed up Los Angeles and thus reconfigured Southern California. With a wall separating the two countries, residents ponder whether they’d be better off with or without the hulking, divisive entity – they ask, “Tear it down or fortify it?”

Connecticut Repertory Theatre took to the task of bringing this unique and challenging production to its “Studio Works Series” which emphasizes new, “more experimental” theatrical texts and forms. And unlike their mainstage shows which bring in acclaimed guest artists and other industry professionals, the Studio Works performances cast only UCONN students – highly talented actors who demonstrate abilities clearly equal to their more seasoned, equity counterparts.

Hailed as a “multipartial” theatrical piece, Nuevo California seeks to find balance among opposing worldviews; yet the reality remains, there is no clear-cut answer. In this particular approach toward dispute resolution, lasting closure only can come from embracing differences and finding a middle ground. As such, Nuevo California’s characters articulate their often conflicting feelings and share their divergent realities. Set in 2028, five years after the mammoth earthquake, a very colorful cast of individuals including white Americans from California, Chinese immigrants, Native Americans, and Central Americans, bring the conflict to life – an avocado farmer, a Jewish-American photojournalist, a Mexican mother who grieves the loss of her young son, a news anchorwoman, and a hip-hop poet are among them. At the center, however, is young, liberal Mexican Pope Felipe, whose wish is to remove contentious wall. 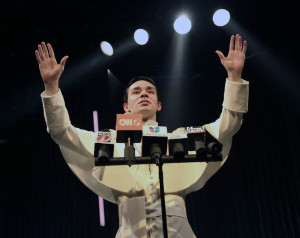 While Pope Felipe may be the main protagonist, he is rivaled by the wall itself – with incredible scenic design by Brett Calvo, the barrier is a behemoth; formidable and intimidating, cutting away gray areas and leaving only black and white, here and there, us and them. But with to the sure-handed, skilled direction of the talented Richard Ruiz (who did a phenomenal job directing the mainstage’s Spamalot last season), not one among the dynamic cast allows him or herself to be overshadowed by the barricade. I was beyond impressed by the maturity and competence of each and every one – Kirsten Keating Liniger as The Bird, Angel; Aidan Marchetti as Pope Felipe; Pearl Matteson as Sin Fin; Perry Madison as Jaime; Aaron Bantum as Fence Vendor; Gavin McNicholl as David; Sarah Jensen as Maggie; Sam Kebede as Albert; Rebekah Berger as Juana; Shavana Clarke as Rebecca; and Mikaila Baca-Dorion as Campesina Woman. Many of the talented troupe also doubled in other roles as well.

As always, a big hand to the dedicated crew: Andrew Berardi as lighting designer; Theodore Carraro as sound designer; Corey Brittain as costume designer; Michael DiMauro as technical director; Colleen Conroy as voice and dialect coach (as reflected in the many non-Spanish speaking cast members who did an incredible job bilingually); Greg Webster as fight choreographer; Marie Percy as dance choreographer; Nathan Francis as stage manager; and last but not least, Molly Hamilton and Emma Mathieu as dramaturgs.

Multi-cultural ideology celebrates and embraces differences – and where better to bring such matters than to one of our top Connecticut universities. Thank you UCONN for doing such a masterful job with this challenging and thought-provoking work!

“Tear down this wall!” – Ronald Reagan

Despite the fact that we live during a time when technology has made it possible to remotely telework in countless occupations, instantly share information around the world in any given language, and perform almost any group function in a virtual environment, we are still governed, controlled and affected by walls. Walls can be physical, like the now defunct Berlin wall, or psychological, like the invisible but no less tangible walls we create to separate ourselves, our families, and our cultures from others.

Nuevo California, a futuristic (and possibly prophetic?) play by Bernardo Solano and Allan Havis tackles the question of the efficacy of walls that separate cultures. It is 2028 and a devastating earthquake has eradicated Los Angeles; a wall presently separates San Diego and Tijuana. A movement has gained traction to tear down the wall and make San Diego and Tijuana one connected territory known as Nuevo California. A young, charismatic Mexican-American Pope has come to bless the region and support the wall’s destruction. But not everyone is in agreement and the young Pope himself must wrestle with both the sins and the ghosts of the past (and his own faith and spirituality). 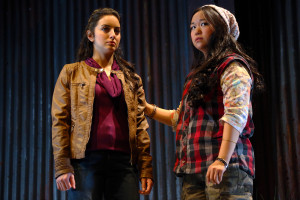 The genesis of the play began in 1998, when the playwrights interviewed over two hundred residents of San Diego, Tijuana, and Mexicali asking one question: “Would we be better off with or without a wall bewteen the two countries?” The answers are subsumed within Nuevo California, originally categorized as a “binational” play which opened in San Diego in 2003. The themes of borders and walls, culture clashes, bigotry, prejudice, and ethnocentricity are just as relevant today as they were when the play opened – maybe even more so. As such, it serves as a perfect vehicle for Connecticut Repertory Theatre (CRT) to open its Studio Work Series for the 2016-2017 season.

The script is devilishly witty and spares no race, religion, or culture from its scruitiny. Indeed, the play is inclusive of muticultural commentary and anecdotes cover Whites, Blacks, Hispanics, Asians, Jews, Muslims, and even Kumi Indians.

Director Richard Ruiz (who recently directed CRT’s mainstage production of Spamalot) did a superb job of helming this unique and complex play and extracting such powerful performances by a cast made entirely made up of CRT students. The cast, many of whom played multiple parts, is wonderful and one cannot help but wonder if they are this good now, how much will they have grown in artistry when they graduate? Shout outs to all of them including Kirsten Keating Liniger (The Bird, Angel), Aidan Marchetti (Pope Felipe), Pearl Matteson (Sin Fin), Perry Madison (Jaime), Aaron Bantum (Fence Vendor), Gavin McNicholl (David), Sarah Jensen (Maggie), Sam Kebede (Albert), Rebekah Berger (Juana), Shavana Clarke (Rebecca), and Mikaila Baca-Dorion (Campesina Woman).

Nuevo California, like many well-crafted plays, raises more questions than it answers. But it is in the ongoing diatribe that this kind of play engenders that some of the important questions like immigration, border control, and racial and ethnic equality will be answered – and hopefully before 2028.