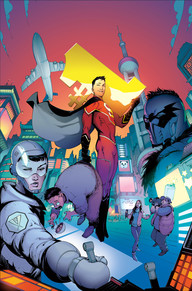 Have you ever wondered what Superman would look like if he ended up in…I don’t know Shanghai? Well in New Super-Man we get to see how that turns out.

The new hero taking the mantel is Kenan Kong, an arrogant bully who finds himself in the right situation at the right time and grabbing national attention as a result. Kenan has been bullying “Fat Boy” whose real name is Lixin, because of some pent-up aggression against Lixin’s father for his mother’s death. However, someone else beats him to the bullying this time – it is Blue Condor, the first American-style supervillain in China who attacks the rich and powerful (unfortunately for Fat Boy). In an impulsive moment of bravery, Kenan fights off Blue Condor which leads to media stardom. Enter Lois Lane’s doppelganger Laney Lan. Lan interviews Kenan and he gives out some information (that he probably shouldn’t have) which surely will haunt him going forward. Only one person hasn’t been won over by the sensation and that’s his father, who sees the real reason Kenan was there in the first place. Through all this Kenan is still powerless – he eventually gets his powers by putting together a Chinese Justice League featuring Batman and Wonder Woman. Can’t wait to see Chinese Cyborg…Dōmo Arigatō Mr. Roboto (I know, I know, that’s Japanese but I just couldn’t resist).

Yang, a child of Chinese immigrants, is the perfect author for this comic as he draws from his Chinese heritage to bring an authentic version of the Chinese Super-Man, Kenan Kong. The overall expression of both the art and the writing transports the reader into the Middle Kingdom. While the writing is in English throughout, Mandarin is stylized as the used language while English is used in an italicized font. Through Chinese traditions and stylization, this comic avoids any stereotypes and makes this great read.

Stylization is mainly what makes this comic stand out and that credit is given to Friend’s and Bogdanovic’s artwork, from their penciling to color. Detail in the backdrop speaks to the Shanghai setting even without the box designating the area. Penciling uses thin strokes to place most of the focus on the characters rather than background; color is vibrant, drawing from many of China’s national colors which also aids in setting the mood of the story. Another impressive element is the attention to detail and the use of actual Chinese characters in the background. There are other unique additions to watch for throughout.

New Super-Man #1 shows how far comic books have come. They are a global medium that may be enjoyed by all. It is great to see DC branch out and join this globalization trend; however, they trail behind Marvel who has been using this fast-growing market for a decade now with different characters (i.e. Big Hero 6) and anime series. Suffice it to say, with the New Super-Man #1, from Smallville, Kansas to Shanghai it is nice to see the world join together and enjoy a shared medium.

*Note: This comic follows in the footsteps of The Final Days of Superman and Kenan is just one of the characters who will fill the shadow left after the New 52’s Superman’s departure.
Rating: 9/10 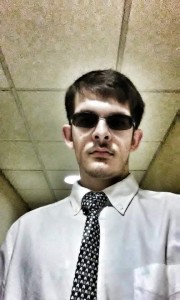