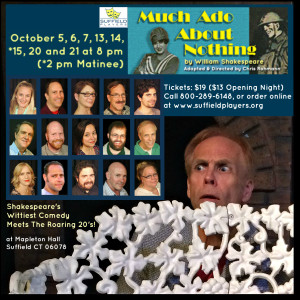 In decades of feeding my cultural vulturism, I have seen a plethora of Shakespeare productions – everything from the good, the bad and the ugly; from CinemaScope to backyard plays by middle schoolers. I have had the pleasure of watching a young Richard Dreyfus play Cassius in the Brooklyn Academy Music’s (BAM) production of Julius Caesar in 1978, the day after he won the Academy Award for the film, The Goodbye Girl. And that doesn’t take into account all of the Shakespeare plays I read in college and the vinyl LPs of Richard Burton performing Shakespeare. I am thrilled, though not surprised, that out of all of the Shakespeare productions I have seen, heard, and/or read, Suffield Players’ production of Much Ado About Nothing was, by far, the easiest adaptation to follow, understand, and enjoy (no Sparknotes necessary). 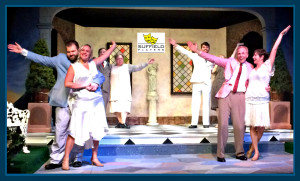 This is due in large part to the creative vision and innovative direction of Chris Rohmann and an incredibly talented cast. This adaptation takes place in the roaring 1920s – although with this amazing troupe, it could have been placed in any period of time and would still resonate with the audience. That is because the actors (God, I hate this word) “emoted.” It wasn’t like so many Shakespearean productions (even professional ones) where the actors and audiences alike are grateful that they can get through the soliloquies and often pedantic structure without succumbing to a scenario out of Christopher Durang’s The Actor’s Nightmare. 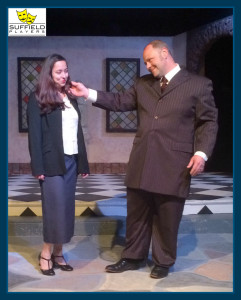 Every single one of the actors reached deep into their instruments and used every shred of body language (including animated facial expressions) to convey in an extraordinarily easily understood manner, Shakespeare’s words, intent and, most of all, his dramatic brilliance. Suffield’s Much Ado has proven beyond a shadow of a doubt that Shakespeare is not only relevant to today’s audiences, but can be enjoyed as easily as a Netflix sitcom. Even Mr. Rohmann’s carefully planned staging and blocking underscore and facilitate the play’s overall themes and character traits. For example, we know immediately that Don John is going to be a key villain just from his stage action of feeling up a toga-liveried female statute.

As Mr. Rohmann’s states in his intro in the program, the “nothing” in the play’s title in Shakespeare’s time refers more to the act of “noting” which meant gossip, rumor, innuendo, speculation, etc. Nothing is what it appears to be and one’s faith and loyalty are at the core of play.

Without giving too much away, the director’s use of the three constables and the homages to The Three Stooges, Laurel and Hardy, and Abbott and Costello were priceless. A special shout-out must go to Technical Director Jerry Zalewski whose simulation of the eighteen-frame-per-second silent film sequence gave it a real Keystone Cops feel. (I know what you’re saying – Three Stooges? Laurel and Hardy? Keystone Cops in Shakespeare? While Shakespeare may be rolling in his grave, you’ll be rolling in the aisles laughing your you-know-what-off.)

Suffield Players’ Much Ado About Nothing is really much ado about a lot of stuff and as Shakespeare said in As You Like It, “all the world’s a stage,” and this is one adaptation of a stage play by the Bard that you will not want to miss!

I admittedly am not an expert of Shakespeare’s countless works, although I am an admirer. I’ve seen a handful of productions and I’ve read the requisite texts assigned in high school. Of late, I have had many opportunities to see more and more productions at various theatres – it makes me feel so cultured! 😉 But there are certainly times that experiencing Shakespeare requires SparkNotes translations when the presentations are something akin to watching a show in another language without subtitles – and that can make one’s head hurt (and makes me feel so NOT learned!)  But I know I’m in good company – especially when I attend with my husband/co-reviewer who’s read and seen much more of the Bard’s work and he too, leans over requesting the armchair cheat sheets (or at least wishing he’d read the synopsis before we arrived).

Such was not the case at our recent jaunt out to see The Suffield Players’ Much Ado About Nothing presented by expert hand of director Chris Rohmann. Touted as “Shakespeare’s Wittiest Comedy Meets the Roaring ‘20s!” this truly fantabulous incarnation melds the bygone-but-not-forgotten, freewheeling flapper era with the hilarious trickery and deceit among the lovers and other accomplices residing in and/or visiting the city of Messina, Italy. And guess what? You won’t scratch your head even once as the emotional roller coaster of love, betrayal, and uncertainty rides on!

The story begins in Messina, when Don Pedro, army captain and Prince of Aragon (Tyler Wolfson), pays a call to Leonato, lord of the manor (Dana T. Ring), upon his return from a triumphant war against his bad boy, bastard brother, Don John (Tim Reilly). Benedick (Rob Lunde) and Claudio (Tom Hebert) are two officers who accompany him and soon find themselves in some sticky and humorous situations. It is Claudio first, who becomes enamored with Leonato’s daughter, Hero (Amanda Marschall); and then Benedick, a perpetual bachelor, has a few tepid run-ins with Beatrice, the Governor’s sharp-tongued, eavesdropping niece (Karen Balaska). It’s not long before Claudio and Hero are to be wed (we think) and well, we’re not too sure the ultimate fate which will befall Benedick and Beatrice.

The misadventures begin as Don Pedro, Leonato, and Claudio meddle with Benedick and Beatrice in an endeavor to make the two of them fall in love. While neither have done a dang thing to promote it, Benedick and Beatrice believe that the other is truly bewitched by them. As the calamities continue, someone plots to call Hero’s virtue into question and it’s the comically dastardly duo of Borachio, Don Johns’ adjutant (Paul Tafoya), and Conrade, Borachio’s aide-de-camp (Becky Schoenfeld), who’re at the helm. All the while, Dogberry, officer of the watch (Shaun O’Keefe), and constables Verges (Mark Proulx) and Otecake (Joshua Prouser) bumble through trying to catch the evildoers. Governess Ursula (Kelly Seip) and maidservant Margaret (Nicole Murray) join in the exploits as do the Friar and Magistrate (Hal Chernoff). 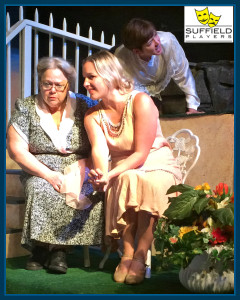 This unique presentation will have your toes tapping during the lively dance numbers and your sides aching at the hysterical and often inelegant antics of the company, including and most frequently, the trio of Dogberry, Verges, and Otecake. There’s nothing like a true ensemble cast to pull off a fine Shakespearean production that couldn’t work without each and every integral cog in the wheel.

Always a team effort that rivals so many of the professional productions we at Pillow Talking are privileged to see, The Suffield Players pulled together a dynamic gestalt. Kudos to Konrad Rogowski for a stellar set design; to Rohmann for sound design; and to Jerry Zalewski for technical direction. Amy Bouchard provided fun ‘20s-style choreography; Robert Lunde did a fine job with costuming; as well as Lisa Parker and Linda Spanilo for beautiful mask design. Shout-outs to the entire rest of the incredible house staff for always extending to us a warm, family-style welcome.

This light-hearted show is rife with physical comedy, accented perfectly with the talented company’s exaggerated facial expressions and body language. Much Ado About Nothing is lively, fiery, and fun. Whether you know the story or have seen the production before, it is well worth the trip to catch it on Mapleton Hall’s boards – and as always, I can’t wait to see what they’ll have for us next!