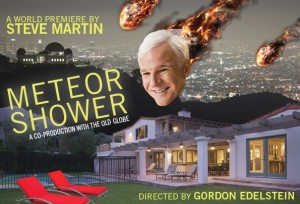 (Disclaimer: I unknowingly began my post with the very same Steve Martin quote as my co-reviewer/husband, Wayne, but I’ve elected to delete it so you don’t have to read it twice!)

If Steve Martin himself was an entry in the dictionary, the definition might simply state: expect the unexpected. And that’s because Martin has distinguished himself as a man with a very unique, sometimes startling brand of comedy – and the fact is, from him, we do expect it, though we don’t ever know what will be before us. He’s highly intelligent, slightly ridiculous, and he proudly marches to the beat of his own drummer. Some of us get him; some may get him some of the time; some don’t ever. But that’s not important to Martin. Expressing himself is.

I’ve always been a fan of the great Steve Martin; however, much of what initially defined him was produced at a time when I wasn’t old enough to understand his humor or even to appreciate it. He carved his niche with irreverent stand-up and a plethora of offbeat films in which he did implausible, wacked out things; in classics such as The Jerk (he’s a poor, black sharecropper’s son with no rhythm) and The Man with Two Brains (he’s a surgeon and the inventor of the cranial screw-top brain entry technique). You take outrageousness, meld it with cleverness, toss in a dash of abstruseness and you have something only someone as brainy as Dr. Hfuhruhurr may understand (Martin in Two Brains). 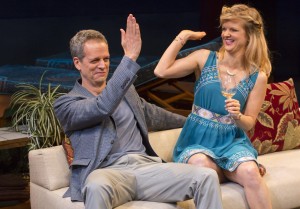 And that brings us to his newest theatrical endeavor, Meteor Shower, which had its East Coast premiere at New Haven’s incomparable Long Wharf Theatre following its West Coast world premiere at the Old Globe Theatre in San Diego. Akin to chaos theory, Meteor Shower delivers a nonlinear story with elements that essentially are impossible to predict or control, much like Martin himself. It is the outlandish yarn about a very vanilla (albeit a tad peculiar) married couple, Norm (Patrick Breen) and Corky (Arden Myrin), who play host to the sex-crazed Gerald (Josh Stamberg) and Laura (Sophina Brown), on the evening of a meteor shower. The pairs couldn’t be more different from one another – or maybe they aren’t? Once the scene is set, you might ask, are they actually just one another’s mirror images – reflected, yet reversed duplications? Are they some sort of twisted alter egos – aspects of the psyche portrayed as seething masses of Freudian id (primitive, instinctive, impulsive, and infantile) vs. superego (moral, controlling, prohibitive, and punishing), with the ego/self somewhere in between? It can be no coincidence (I’d ask Mr. Martin if I could) that meteor showers all are named for the nearest bright star or constellation and then tacking on an ending of “id” or “ids” (i.e. Leonids, Orionids) can it?

From the outset we see that Norm and Corky are trying hard to make their marriage work; every time there’s even a hint of disagreement, they stop, join hands, and spout magic relationship words to each other – cloying and nauseating phrases you can imagine a phony-baloney therapist once handed them at some over-the-top couple’s retreat. When Gerald and Laura arrive, things immediately spin out of control – and that’s long before any meteors are spotted – and they will, believe me. Who are these people? What do they want? We’re never quite sure, despite the fact that Gerald plays tennis with Norm and Laura may or may not have been a Vogue editor; we know they like expensive wine and they seem to have a thing for eggplant.

Norm and Corky think their well-appointed Ojai home could be featured in Architectural Digest – but Laura, who speaks insensitively and without a filter, knocks it and Corky down to size; Gerald says and does countless inappropriate things. The two of them are like a pair of rapacious sharks circling their prey, hoping for some liquor-and-other-drug-fueled spouse-swapping. 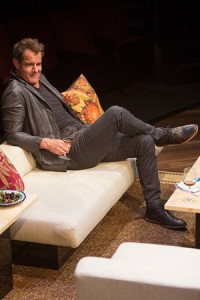 The story begins, stalls, rewinds, and fast forwards. Perhaps it’s a parallel universe. Maybe it’s a fantasy, or a dream, or just two sides of the same coin. Regardless, it’s curious and it’s mind-bending. In spite of this, and what isn’t up for question is the talented cast – Breem as Norm is phenomenally neurotic, at times channeling some of Martin’s trademark physical comedy. Brown is spot-on as the sultry, slutty, and altogether beguiling Laura. Myrin couldn’t be more perfectly cast as the quirky, insecure, bubble-headed, wine-guzzling Corky. And Stamberg (who came in last-minute to replace Craig Bierko) was suave and at the same time, mildly unnerving as the predatorial Gerald. The four were a delight to watch no matter how vexing the plot became. Just when you think you may have it figured out – presto-change-o – there’s a new twist.

The riotous farce is adeptly directed by Long Wharf’s artistic director Gordon Edelstein (who’s also directed two other of Martin’s works). It is set on a brilliantly simple revolving stage: living room adorning one half, outdoor patio on the other. Action takes place at times alternately or simultaneously on both. (Kudos to Michael Yeargan for the innovative set design.) Shout-outs to Jess Goldstein for costume design, Donald Holder for lighting, John Gromada for original music and sound.

We were fortunate to catch a post-show talk-back with the cast and learned that even the actors weren’t certain of exactly what transpires in the plot, but each had their own theories. Much of the story is open to individual interpretation by the audience as well, and no doubt, it will have you scratching your head (which will be just short of exploding) throughout and you’ll continue to ponder it long after. It would seem, that’s precisely what Martin would want.

The above quote uttered by Steve Martin could easily have applied to his new play Meteor Shower, which had its world premiere at Long Wharf Theatre in Connecticut. Indeed, only a play like Meteor Shower could have been born, raised, and nurtured by a mind and talent like Steve Martin. 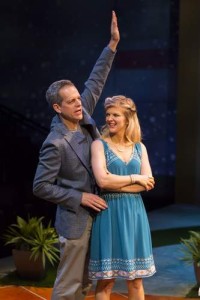 The play opens with what appears on the surface to be your average, middle- to upper middle-class suburban couple, Norm and Corky. They have their deep-seated routines and marital idiosyncracies. Former couple’s counseling and anger management can be implied by the way they express their displeasure with each other – by holding hands and calmly explaining to the other what irks them.  But as the play unfolds we see that Norm is far from normal and Corky is quirky to say the least. The catalyst for their descent into the maelstrom is the arrival of another couple, Gerald and Laura, who are the exact antithesis of Norm and Corky in just about every way. The stated purpose for their visit is to watch a meteor shower from Norm and Corky’s backyard. The real purpose, however, is to turn Norm and Corky’s lives totally upside down.

There are belly laughs for sure. The wild, wacky, and absurdist comedy throughout the play is typical of the type of humor we have seen from Steve Martin in the past in his films, writings, and other appearances. But it is in between the laughs, smiles, and guffaws that the serious themes of the play rest.

Serious? Really? Yes, there is a great deal of fodder for later cerebral digestion. What is normal? What is sanity and insanity? What if we had no societal limitations imposed upon us and acted on our impulses? It would not be spoiling anything about the plot to say that Gerald and Laura could be interpreted as the libidinous alter egos of the repressed Norm and Corky. And maybe it takes something extraordinary like a meteor shower to unmask the id in all of us.

The play certainly raises more questions than it answers. I would be remiss if I didn’t admit that the somewhat obscure meanderings of the story made me want Mr. Martin to write the Playgoer’s Companion Guide to Meteor Shower. But even with its more ambiguous and confounding elements, Meter Shower is engaging and thought provoking – which I am certain was one of Mr. Martin’s goals in penning it.

The acting was brilliant. Patrick Breen as Norm played the perfect nerd-do-well introvert with a lustful eye and adulterous underpinnings. Arden Myrin as Corky brought just the right mix of Stepford naivete at times and insightful musings and commentary at others. Josh Stamberg as Gerald and Sophina Brown as Laura were spot-on as the swinging alter egos (if in fact that’s what they really were). They had great chemistry and both had commanding presences.

The play was adeptly directed by Gordon Edelstein. Who better to decipher the mind of a comedy genius and bring flesh and blood (literally – you’ll just have to see the play) to his brainchild other than veteran Director Mr. Edelstein, who also directed Mr. martin’s two previous plays, Picasso at the Lapin Agile and The Underpants.

The play Meteor Shower is like the real thing: it has to be seen live to really reap the full impact. As Steve Martin once said, “A day without sunshine is like, you know, night.” That quote has nothing to do with his play – but, on second thought, maybe it does.