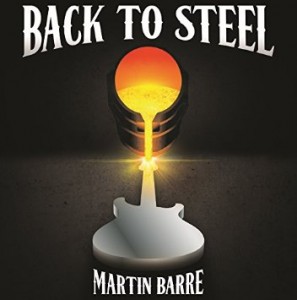 Martin Barre’s Back To Steel

Today I have the honor to check in on one of the elder statesmen of rock and roll, Mr. Martin Barre of Jethro Tull fame! I’m happy to report the old boy is doing great and I say “old boy” with the greatest of respect…you don’t get to be an old boy in this business without having several talents, many of which are outside of musical ability.

As I popped in the CD, the first thing that hit me was…there it is. The familiar guitar sound of so many songs of my youth. All the true guitar greats have a “thing”…a sound, a technique, a feel, a vibe, whatever you want to label it. I call it a “thing.” He displays great feel, tone, and taste. Remember the intro to “Locomotive Breath”? The solo on Aqualung with that note that rolls over into the perfectly pitched feedback? The pinched harmonics? All of that is a thing…and Martin brings his thing to this solo CD in spades.

The songs on the CD are very “English” and that again is a compliment coming from me. This is just one man’s opinion…but let’s face it, the best music comes from England. You can hear in his solo writing, just how much he brought to the table with Tull. There are a few songs on here like “Sea Of Vanity” for example, that if you substituted the vocalist with Ian Anderson you would have a Tull album A-side. A couple of songs to note are the three remakes: “Skating Away” and “The Slow Marching Band” from Tull and the Beatles’ “Eleanor Rigby.” All three were a totally fresh approach to the iconic songs and very enjoyable.

Personal favorites time! I would note “Chasing Shadows” because it was hauntingly beautiful; the sophisticated rocker “Moment of Madness”; and the bluesy “Peace And Quiet.” I also really liked the musicians Martin chose. They were all spot-on and the quality you would expect is there in song and in performance on this CD.

With so few outlets available today for putting out new music from our dwindling supply of true “Rock Gods,” I’m happy to report this CD hits the mark and I for one am a reenergized fan!

Martin is out with his band touring and promoting this CD now. Show some love and go see him, you will be happy you did. See you there!