Pillow Talking’s Review of MANCHESTER BY THE SEA 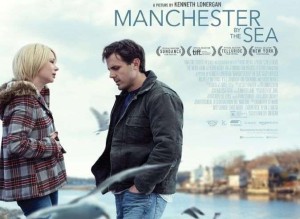 MANCHESTER BY THE SEA

We often talk about this somewhat nebulous notion known as the human condition – our collective experiences as humans; those essentials of our very existence. As a species, we are capable of endless thoughts and myriad feelings; we laugh, we love, and we move forward each day, touching others and building (and rebuilding) our lives. But at times we also act impulsively and we make mistakes; we are confused; we feel hurt and we hurt others. We are dreadfully imperfect – mere mortals who often act as less than our ideal selves. And try as we might to understand the totality of all of this, we don’t. We can’t.

In film, sometimes an artist comes along who creates a work that truly and completely illustrates this fragile element of what it means to be human. Who shows what happens when one of us falls – when we land so hard we cannot pick ourselves back up. Nowhere is this so powerfully demonstrated than in writer/director Kenneth Lonergan’s 2016 Manchester by the Sea. Lonergan paints a striking portrait of a man so profoundly ravaged by grief and loss, he’s become a mere shell of his former self, traversing the terrain of his life like a specter; detached, distant, and all but invisible. It is a study of human suffering that is hauntingly visceral, soul-engulfing, and it will ultimately wreck you. 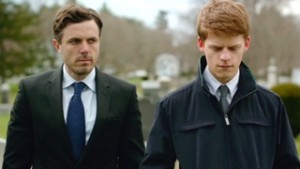 In a brilliant and stunningly raw portrayal by Casey Affleck, we meet Lee Chandler, an unremarkable apartment maintenance guy in Quincy, Massachusetts. He tirelessly and ceaselessly shovels snowy walkways, unclogs toilets, and handles basic electrical work. He lives alone, which is good (we think), as communication doesn’t seem to be his strong suit; however, his quiet and standoffish demeanor can shift quickly to dropping a string of F-bombs and throwing more than a few punches in the local bar. But this relatively banal existence is transformed when he gets a phone call that his brother, Joe (a phenomenal Kyle Chandler), has suffered a heart attack. He jumps in the car and races upstate to Manchester-by-the-Sea to be at his side – but he’s too late, and now he must break the news to Joe’s son, popular high schooler Patrick (Lucas Hedges is captivating). In the coming days as he is trying to get everything in order, Lee reels when he learns that Joe has named him Patrick’s guardian in his will.

But Lee’s return to Manchester is a painful one – and it is not only because of his brother’s passing. Through a series of clipped poignant scenes set against the frigid backdrop of the coastal town, many of which also are flashbacks, we begin to piece together why. It is a life splayed out like irretrievable fragments of broken glass. A life too shattered to repair.

Lonergan has so masterfully woven this powerful tapestry. And akin to sympathy pains, we feel our own guts wrench as Affleck’s Lee is forced to face his demons. He lets no one in and has imposed upon himself an enormous and often overwhelming burden to keep his incapacitating suffering buried; as a result, he lives a life almost wholly without meaning. Yet his pain is juxtaposed against his nephew’s healthier ability to cope; he’s sixteen, full of vitality, and has the will (and resources) to move forward. Punctuated by humor as in life, we are hard pressed not to also hang onto hope. Like Truvey Jones in Robert Harling’s Steel Magnolias, “Laughter through tears is my favorite emotion.” 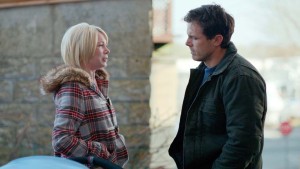 With mesmerizing performances by Affleck, Chandler, and Hedges, it is impossible not to mention the incredible (and Oscar-worthy) way Michelle Williams ignites the screen in every scene as Lee’s former wife, Randi. She alternately dazzles and devastates. Gretchen Mol as Joe’s ex, Elise, and C.J. Williams as long-time family friend George, as well as Kara Hayward as Silvie, Anna Baryshnikov as Sandy, Heather Burns as Jill, Tate Donovan as Patrick’s hockey coach, and a cameo by Matthew Broderick as Elise’s fiancé, Jeffrey, round out the incredibly talented cast.

One often wonders why some people bounce back from tragedy while others succumb. This term in psychology is known as resilience – and it is like a bewildering, unsolvable puzzle with multiple interlocking factors and mechanisms. And while Lee illustrates one who has been mercilessly knocked down by life, he somehow continues to move forward, in the best way that he can. Lonergan brings you into the lives of these very real people and doesn’t let you go. And you’ll be glad he doesn’t.

Life turns on a dime. Sometimes towards us, but more often it spins away, flirting and flashing as it goes: so long, honey, it was good while it lasted, wasn’t it? ― Stephen King, 11/22/63

I hate it when I simply love all aspects of a film and want to lavish praise on it, but it’s all been said before (some more eloquently than myself) and I end up sounding like a two-bit plagiarist who echoes overused accolades of other critics (many more famous than myself). I want to say that Kenneth Lonergan’s Manchester by the Sea was a brilliant Tour De Force; extraordinary, a masterpiece, riveting. I want to say that the entire cast was absolutely flawless and each one of them gave the performance of their acting careers. But then my review would sound just like the plethora of others it received at the Sundance, Telluride, Toronto, and New York Film Festivals.

So, instead, I’m going to say – It was a damn fine piece of filmmaking and I wish with all my heart that I had written and directed it. It’s an engaging, authentic, mesmerizing film that will haunt you long after it is over. Indeed, it’s the kind of film that, like life, must be processed in its own time; one that you wake up in the middle of the night with a sudden flash of realization and say, “I got it!”

Manchester by the Sea is a real place. And the characters and events in the film are SO real that even for an old film guy like myself, I got caught up in the verisimilitude of it all. Of course such reality, such authenticity (there’s that word again) can only come from an incredible script, a visionary director, and a fantastic cast. All of these elements are present in the film. 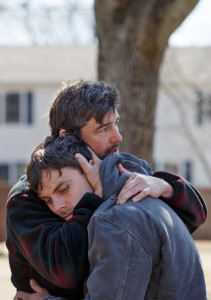 When I saw the trailer and read the one-sheet blurbs about the film prior to seeing it, I still had absolutely no idea what it was about. And in writing this review, I understand now why that occurred – because no trailer and/or promo piece can do justice to this film without giving away critical spoilers which MUST be experienced in the context of the film. So what can I tell you about the plot or storyline of the film?  What can I tell you about its themes without giving away anything? It’s about love and loss and tragedy and forgiveness and unforgiveness and redemption and condemnation. It’s about life and maybe people we know. Maybe it’s even about all of us in some way. There is so much emotion packed into the film that it would be difficult not to resonate with someone at some level.

Obviously, director/writer Kenneth Lonergan’s background as the offspring of a psychiatrist mother and doctor father was not wasted on him. He has created a brilliant, masterful psychological matrix; a minefield where one wrong step opens a Pandora’s Box of our worst fears and nightmares.

In talking about the cast, I realize that there is no possible way I cannot sound like a used car (I mean pre-owned) salesman touting hackneyed superlatives. Casey Affleck is simply superb. He says more with his eyes and body language than any actor I’ve seen in a very long time. His performance is so precisely measured and executed, 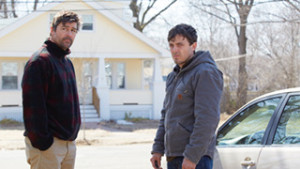 always simmering just below the surface, waiting to erupt in a crescendo of emotion at any given point in time. Michelle William’s performance is staggering in intensity. Kyle Chandler, who plays Casey Affleck’s older brother in the film is wonderful (I cannot help but think how far he has come from the TV series Early Edition and the George Straight film Pure Country). And the charismatic and thoroughly engaging performance of relative newcomer, Lucas Hedges, will melt the coldest heart of the worst cynic alive today. A special shout out must go to Mathew Broderick as well who demonstrates that there is no limit to his range as an actor.

What else can I say about Manchester by the Sea that hasn’t already been said? I don’t know. I do know that it is indeed one of those rare Venus flytraps of a film that comes along every once in a while that has the unique ability to reach past its own celluloid borders and pull you into its world. It’s a film that MUST be experienced, not just seen.

On a totally different and somewhat irrelevant side note, it’s also nice to know that when I make purchases on Amazon.com, my money is going to support the distribution of films like Manchester. (Amazon reportedly paid ten million dollars for the domestic rights – a bit pricey, but a smart investment.)  Kudos to Jeff Bezos as well! 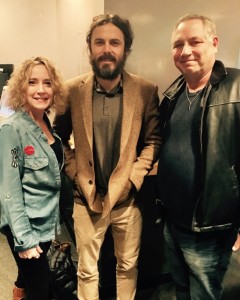