Pillow Talking’s Review of MAN OF LA MANCHA at WBT 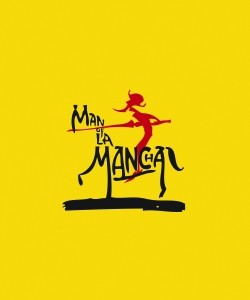 A visionary. An idealist. A mad man. Can these three all be one in the same?

There are many lessons in Dale Wasserman’s classic musical Man of La Mancha but the aforementioned are what’s at the crux of the tale. Anaïs Nin may have said it best: “We don’t see things as they are, we see them as we are.” Our thoughts and our behaviors are fully based upon our own personal worldview – our outlook or our philosophy of life. In essence, what we hold dear and the things that we believe serve to mold us. The character(s) Alonso Quijana/Don Quixote is/are a magnificent example.

We had the pleasure of seeing Westchester Broadway Theatre’s phenomenal rendition of Man of La Mancha, directed and choreographed by David Wasson. And who better could there have been to lead this stellar cast, but Wasson, who himself has performed the title role over 1400 times, including on Broadway. His sure hand guided the entire troupe through an engaging and seamless production.

The play takes place during the Spanish Inquisition and begins with the imprisonment of poet/actor/tax collector Miguel de Cervantes and his trusty manservant; Cervantes’ crime is that he has put a lien on the church. When he is attacked by fellow prisoners, he must “stand trial” in order to save the chest which contains his sole and dear possessions, including a manuscript he has written. Pleading to be heard, Cervantes requests to “act out” his defense by performing a play, using the other prisoners as his cast (thus Man of La Mancha becomes a “play within a play”). He adopts the role of Alonso Quijana and his alter ego Don Quixote, a charming, chivalrous gentleman whose idealistic head is so far in the clouds, his feet may no longer be on the ground.

The rest of the play toggles back and forth between the grave matters of the Inquisition and the goings-on of the prison as well as places which occupy the imagination of Cervantes, including a rundown inn, the roadside, a church, and Quijana’s bedroom. At the heart (pun intended) of Cervantes’ fanciful tale is Quixote’s love for tavern wench and sometimes prostitute Aldonza, whom he dubs his lady Dulcinea. He sees this broken woman through his own mind’s eye – as a beautiful soul – and not as others may see her or even as she sees herself. His love is pure and it touches her in ways she never has known. 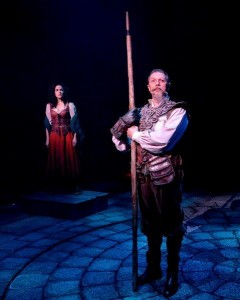 Paul Schoeffler, a veteran of Broadway, Off-Broadway, TV and beyond as Cervantes/Quijana/ Quixote is marvelous – and this also is far from his first stint in the role (he received Barrymore and Broadway World nominations for best actor). He is charismatic without becoming a caricature of this layered and dynamic man and his moving voice is rife with passion. He truly leads the cast, deftly switching between his characters.

Michelle Dawson as Aldonza/Dulcinea intensely embodies the strong, cynical woman who reveals she has been wronged literally since her birth. Her voice is rich and powerful. Gary Marachek as Cervante’s manservant/Sancho Panza is beyond delightful. He expertly provides an ideal amount of comic relief as he dutifully follows his master everywhere, even into prison. And why does he? Because he says, simply, “I Really Like Him.”

Ian Knaurer as Duke/Dr. Carrasco is impressive as the man you love to hate. Alan M-L Wager is often amusing and always wonderful as Padre, delivering as much in his voice as in his facial expressions. Geoff Belliston’s portrayal of the Governor/Innkeeper is fantastic, most notably when he steals the scene during Quixote’s official knighting. David Cantor is a humorous Barber, and Joseph Torello makes you quiver as the Captain of the Inquisition. Sarah Hanlon (who was phenomenal in WBT’s Show Boat) is an incredibly gifted songbird as Antonia. John Paul LaPorte is the supreme bastard as Pedro (you’ll know why when you see him). 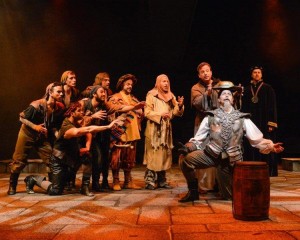 There truly are no small roles and although it is far too difficult to call out each, I must state that this production’s ensemble was by far one of the best I’ve seen. They are a tight, perfect complement to the leads – and if animals can trump people, the scene with the donkeys takes the cake! Kudos to Joanne Borts (Housekeeper), José Antonio (Jose; Ensemble), Alan Gillespie (Anselmo; Ensemble), Gabriella Perez (Fermina; Ensemble), Diego Rios (Tenorio; Ensemble), Dougie Robbins (Juan; Ensemble), and Corinne Scott (Maria; Ensemble). Shout outs also must go to James Jelkin as the Fight Director and Eric Briarley as the Fight and Dance Captain for the multiple fight scenes.

The sets, costume and lighting cannot be left out – in a word: perfection. The moveable staircase added an essential dramatic touch; Michael Bottari and Ronald Case were responsible for such magnificence. Lighting and sound design added the powerful complements, done by Andrew Gmoser and Jonathan E. Hatton. Patrick Hoagland’s musical direction was masterfully executed.

As always, Westchester Broadway Theatre provides an altogether inspiring experience with its one-stop evening (or afternoon if you prefer) of a fine meal and professional theatre. And their current offering of Man of La Mancha just may allow you to sidestep some of the ills of humankind and see the world through Quixote’s remarkably unspoiled eyes. 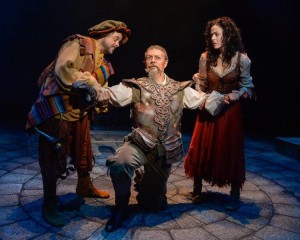 Man of La Mancha has been a staple of professional and community theatres for years. In fact, the play should be retitled MEN of La Mancha. There have been so many productions of the play that it becomes interesting to see the different splashes of creativity and originality brought to the story by the plethora of directors who choose to direct it.

The 1964 musical, based on a non-musical television treatment by Dale Wasserman, spins a fictional yarn about Miguel de Cervantes and his famous mad knight, Don Quixote. Using a play within a play framework, Miguel de Cervantes plays the character of Don Quixote with fellow prisoners while waiting to be judged by the Spanish Inquisition. The play deals with dreams, reality, illusions, and delusions.  Strewn through the fabric of the piece is the notion that individuals, like brave knights, need quests to strive for in life. The quest, of course, is described in the iconic song, The Impossible Dream

With a professional Equity Theatre like Westchester Broadway Theatre that chooses to put “Broadway” in its title, one would expect productions to be Broadway-quality and stellar in every element including casting, acting, blocking, staging, lighting design, scenic design, orchestration, and on ad infinitum. And WBT’s current production of Man of La Mancha fits neatly within those parameters – it is stellar in every aspect of theatre production. 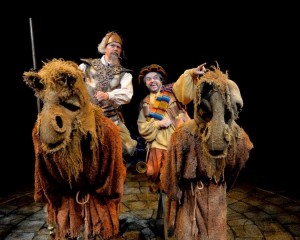 There’s a good reason why experienced actor Paul Schoeffler’s name is above the title in the program.  He plays the perfect mad knight, with his booming voice and commanding stage presence. He stood shoulder to shoulder with past Quixote’s including Richard Kiley, Raul Julia, and a personal favorite of mine – Brian Stokes Mitchell. The part of Sancho Panza, Quixote’s loyal sidekick and manservant, has always caused loss of sleep for casting directors. Sancho needs to be funny, charming, and engaging. Fortunately, the versatile actor Gary Marachek fits the bill nicely. Michelle Dawson is a chemist as well as a veteran actress for she mixes up a fine batch of vulnerability, sensuality, and snarky cynicism for the street urchin Aldonza, who under Quixote’s influence, aspires to be the lady Dulcinea. As a change-up from other productions, Alan M-L Wager brings a nice comedic flair to the role of the Padre as does David Cantor to the role of The Barber. Another refreshing surprise was Geoff Belliston who displayed a nice arc between the roles of the Governor and the Innkeeper. Quixote’s nemesis in the play, Captain of the Inquisition, is menacingly played by Joseph Torello (yes, I can definitely see him in his listed role of Lurch in a production of The Addams Family). Quixote’s nemesis in the play within a play is the Duke, competently portrayed by master singer and actor Ian Knauer. Rounding out a truly talented supporting cast is Joanne Borts as the Housekeeper (who, according to her website, also directs, coaches and plays a little red accordion though not in this production). 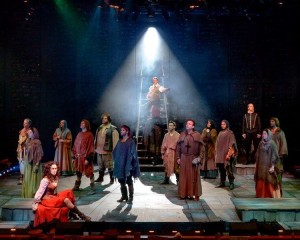 It is hard for reviewers to mention everyone in a cast or crew, especially when the cast is particularly large as in the case here. But then again, rules were made to be broken. I do need to give shout outs to the following Muleteers: Dougie Robbins, José Antonio, Alan Gillespie, John Paul LaPorte, and Diego Rios; and the rest of the wonderful ensemble, Corinne Scott, Gabriella Perez and Sarah Hanlon (who was so good as Julie in WBT’s Show Boat).

WBT’s version of Man of La Mancha was creatively directed and choreographed by David Wasson. Mr. Wasson clearly put his own stamp on this version by ingeniously crafting special unique moments in the play – e.g., watching the mannerisms and antics of Quixote’s two mules was pure delight.

The set design and costume design and execution by Michael Bottari and Ronald Case were highly effective. The set, while relatively uncomplicated, was elegant in its simplicity, giving the actors enough space to perform their play within a play. Stairs were dropped from above the stage when heralding the entrance of the Spanish Inquisitors. The backlighting of the stairs (thanks to lighting designer Andrew Gmoser) with the smoke effects and sound effects (thanks to sound design by Jonathan E. Hatton) was like something out of Cats or the new Star Wars movies.

Lest we not forget, Man of La Mancha is a musical and fully delivered in this department as well thanks to veteran musical Director Patrick Hoagland.

Overall, the WBT has succeeded in its quest to bring exhilarating theatre like Man of La Mancha to its stage and has once again earned “Broadway” in its title.