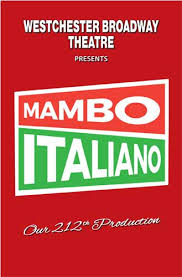 I’m not Italian but I am married to someone who identifies as Italian; and if we’re quantifying, he’s actually verified his roughly 50% heritage through Ancestry.com. I’ve also had many Italian friends and admit to having at least a cursory knowledge of some of the characters from the cloying Jersey Shore TV show, although I’ve never watched it. Therefore, I’d say I’ve got some solid contextual background for both the richness of the culture as well as many of the commonly held stereotypes for those who hang the peninsular boot somewhere on their family tree.

Italians as I know them, have a powerful love for both family and food. In many ways these two things are intertwined and inseparable – which evokes an image of the Italian matriarch who nourishes her family (and others) with affection and meatballs. This, in a nutshell, might be said is the basic framework for Westchester Broadway Theatre’s (WBT) 212st production, Mambo Italiano, directed by Tom Polum, with musical direction by Ryan Edward Wise, and associate direction/musical staging by Jill Gorrie.

Mambo Italiano is a revamp of both a play and screenplay by Steve Galluccio & Emile Gaudreault, with book by Jean Cheever and Tom Polum, music by James Olmstead, and lyrics by Omri Schein. In it, we are introduced to the equally as endearing as she is overbearing Maria Barbieri, who, alongside her husband Gino, pours her heart and soul into their Old World family restaurant and their two adult grandchildren, Anna and Angelo, whom they’ve raised. While we never really learn what exactly happened to the siblings’ mother – and we can assume it was tragic – there is a disconnect between the grandparents and the grandchildren, both generationally and culturally. Maria and Gino believe they only want what is best for Anna and Angelo, but their love is often suffocating and they are unable to understand the younger Barbieris’ needs and wants in the year 2000. 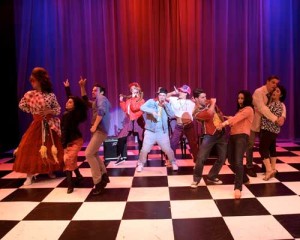 The talent which graces the stage for Mambo Italiano is truly top-notch. But for the first time at WBT, I wasn’t completely swept away by one of their productions. The cast pulls out all the stops, but the material fell a bit short of my expectations. I wanted to love it as I’ve loved their other shows. I wanted an opportunity to embrace my husband’s Italian side through the arts. I even wanted to dine on one of Westchester’s additional Italian entrees crafted specially for this production – but alas, and no fault of WBT’s, I just couldn’t pass up their always amazing prime rib! While there were some laugh-out-loud moments and the depiction of the family and various other characters’ dysfunction mirrors that of many people, the overall story was a bit clunky. The writers did do a great job illustrating many Italian and other cultural stereotypes as well, although it is interesting to note that my husband/co-reviewer disagreed – he felt that perhaps because the stereotypes were at times so over-the-top and so unlike his own family, he couldn’t identify with them at all.

There also are overarching themes about what it means to be a family and about rolling with the punches and adapting to whatever life happens to throw at you. Every member of the company helped bring these themes to life and filled their character’s shoes exceptionally well. Joy Harmalyn captures the essence of the loving matriarch, who’s rarely without her apron and a big pot of marinara. Bill Nolte is wonderful as her husband, Gino, who may only let her think she wears the proverbial pants in the family. Alexandra Amadeo Frost is as lovely as she is strong as Anna, the young woman who is desperate to spread her wings while avoiding having her grandmother clip them. Alex Drost is a terrific Angelo, strong in his convictions while navigating the difficult waters of staying true to who he is, whether or not his grandparents are ready to accept it.

Zach Schanne is as talented as ever as Nino Paventi, the police officer with a secret to hide. We had the pleasure of seeing him knock it out of the park as the titular character in Pippin recently at the Summer Theatre of New Canaan. Diana DiMarzio is a riot as Nino’s mother Lina, who rakes in many of the laughs. 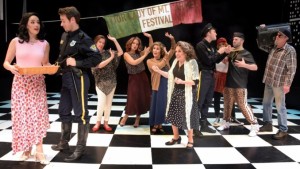 Raising kids can be hard work (I should know, I have four biological children and three stepchildren!). Raising grandchildren I can only imagine must be harder work – and bringing up Italian-American grandchildren in America while trying to stay true to one’s roots has to be even harder. Cheever and Polum highlight these sorts of trials and tribulations in a lighthearted way and if you’re anything like my husband, you’ll be singing Bob Merrill’s Hey, mambo, mambo Italiano / Hey, mambo, mambo Italiano ALL the way home!

Before I begin my actual review of Mambo Italiano at Westchester Broadway Theatre (WBT), I must disclose certain personal details which may or may not have a bearing on my commentary. My mother was Italian – one of nine children. My grandfather was like Don Corleone in The Godfather and the opening scene in the film of the wedding was like every wedding I ever attended of my mother’s side (except on a somewhat smaller scale). In my home, we had pasta Sundays and pizza Fridays and, Madone, did I look forward to leftovers during the week. I also grew up to the sounds of Al Martino, Jerry Vale, Pavarotti, Enzo Pinza, Dean Martin, Connie Francis, and Engelbert Humperdinck (okay, Humperdinck wasn’t Italian, but my household preferred him over Tom Jones).

I really, REALLY, wanted to relate to Mambo Italiano in a La Famiglia e Tutto sort of way. Alas, I could not. The family in Mambo Italiano was not like my Italian family at all – which may be explained by the fact that these were, as the notes said, “Jersey Italians.” This still did not explain my disconnect since I related very well to The Sopranos (who were based in Jersey) and (I am embarrassed to confess) the Jersey Shore Italians on MTV. But then I discovered in the notes that this was an Italian family by way of Canada. In fact, the play was based on an independent film from Canada. The authors of the screenplay were Emile Gaudreault and Steve Galluccio; the screenplay had been based on Mr. Galluccio’s stage play of the same name which, in turn, was based on Emile Gaudreault’s interactions with his family.

And therein lies the clarity. It’s like all those films that are shot in Toronto and made to look like New York because it is far too expensive to shoot in New York; or the Spaghetti Westerns that had salami hanging above the bars in the old-fashioned saloons. There was an underlying core of authenticity that was sadly lacking.

So if you are looking for the kind of ethnic-based material like you’ll find in Fiddler on the Roof, Buona Sera, Mrs. Campbell (which inspired Mamma Mia!), Crazy Rich Asians, or My Big Fat Greek Wedding, at least in my humble opinion, you are not going to find it in Mambo Italiano. What you will find, however, is a lighthearted musical to which people of any ethnicity may be able to relate. There is some serious dysfunction in the family dynamics (but what family does not have some serious dysfunction?) and an LGBT issue. But these matters are not fully explored and the play, whether intentionally or not, remains a PG-13 offering.

So, what is the play about? In short, it is about the trials and tribulations of an Italian family and the restaurant they own, set in 2000. The book was written by Jean Cheever and Tom Polum. Mr. Polum also directed the play. Music is by James Olmstead and lyrics by Omri Schein. 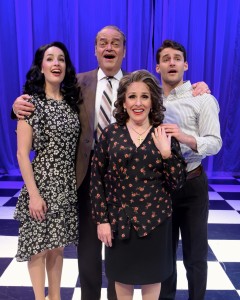 The casting, acting, and singing are top notch. Joy Hermalyn (Maria Barbieri) was pitch-perfect as the matriarch of the family. And why shouldn’t she be with her sterling credentials which include the Philharmonic, Royal Albert Hall London, and Carnegie Hall. I would love to hear her version of “Ave Maria.” Bill Nolte is excellent as Gino, the patriarch of the family. The rest of the leads are also wonderful: Alexandra Amadeo Frost (Anna), Alex Drost (Angelo), Diana DiMarzio (Lina), Natalie Gallo (Donna), and Adinah Alexander (Rosa Donelli). A special shout out to Zach Schanne’s nuanced performance as (Nino) as Pillow Talking loved him in Pippin at the Summer Theatre of New Canaan (STONC).

The bottom line: while Mambo Italiano may not have an overall menu that pleases everyone, it is certain that everyone will find something in it that they like and enjoy.

Nota bene: I also am certain that Lloyd Kaufman, the creator of The Toxic Avenger, a non-SAG, low-budget film which reached cult status and even became a Broadway play, is loving the reference in the writer’s notes. Kudos to Jean Cheever for having the courage in the highly critical theater world, to make a reference to The Toxic Avenger. Toxie, by the way, was from New Jersey, too. If you do not know what the hell I am talking about, you will just have to google it!