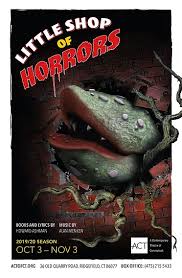 I am not certain of many things in life, but I am absolutely 100% positive that Roger Corman, the pope of pop cinema, the low-budget king, the producer who gave people like Francis Ford Coppola, Jack Nicholson, Martin Scorsese, and countless others their start (he would tell then “Do a good job now and you’ll never have to work for me again”), never would have thought his 1960 black-and-white dark comedy, Little Shop of Horrors, would become a major part of his legacy as a theatrical musical.

With book and lyrics by Howard Ashman and a stunning rock musical score by Alan Menken, Little Shop of Horrors, The Musical has had an unbelievable run on Broadway, Off-Broadway, Off-Off Broadway, as well as community and regional theatres. I remember seeing it when it first premiered in the early 80s, Off-Off Broadway in a dive of a black box theatre. At the end of the show, streamers rained down from the light grid with pasted black-and-white photos of Audrey II’s victims. Watching the ending of A Contemporary Theatre of Connecticut’s (ACT) version and its stylish staging where the victims and Audrey II move out towards the front row of the audience section, I thought about how far we had come in theatrical advancement since the 80s – and, similarly, how far the show has come from a technological standpoint as well.

The play is simple and derivative, yet elegant. Seymour, a poor, nerdish orphan who is taken in by a florist on Skid Row, reaches the heights of Lady Gaga in the new A Star is Born when he comes across a strange looking plant – something that looks like a cross between a cactus and a Venus Fly Trap – and it becomes a global sensation. He soon comes to realize (as does the audience) that the plant thrives and grows on human blood. The bigger the plant becomes, the larger the quantity it needs until by the end of the play it’s like the great white shark in Jaws, swallowing people whole. The plant is named Audrey II, for Seymour’s love interest who is going out with a dark triad type – no, not a politician – a dentist. Spoiler Alert: Yes, the dentist deservedly becomes fodder for the ever-hungry Audrey II. 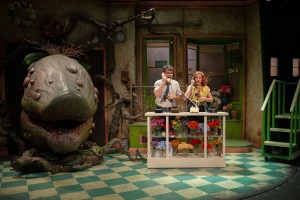 ACT’s version of Little Shop is side-splittingly hysterical, knee slapping, and completely engaging. The casting and staging are pitch perfect. All the performers are triple threats. Robb Sapp plays a great Seymour Krelborn, with just the right mix of nerdiness, charm, and vulnerability – a performance reminiscent of the time I saw Hunter Foster’s portrayal on Broadway. Laura Woyasz is funny and endearing as Audrey, and proves she has the singing chops as well, especially when she performs “Somewhere That’s Green” and her duet with Sapp in “Suddenly Seymour.” Mr. Mushnik is enthusiastically played by William Thomas Evans. In some productions that I’ve seen, Mushnik is played almost as a villain, but here Evans infused the character with just the right amount of charisma. Daniel C. Levine (one of the founders and Artistic Director of ACT) played the sadistic dentist, Orin Scrivello, and as the Playbill notes, just about every other minor character in the show. In his bio it says that Mr. Levine studied dentistry for a time. It’s lucky for the theatre world that he changed his career focus. He was knock-down-drag-out over-the-top (but in the best way possible) as the nitrous oxide-addicted dentist.

Wikipedia (the internet authority that no one should quote or believe) notes:

Mr. Menken accomplished his goal as the trio of singers, Kadrea Dawkins (Chiffon), Ashley Alexandra Seldon (Crystal), and Rachelle Legrand (Ronette), proved that not only are they as good as any studio back-up singers, but can hold their own as a self-contained act.

Of course, the success of the show these days – no matter what the venue is – relies, to a large part, on the puppetry magic of Audrey II. When I originally saw Little Shop Off-Off-Broadway in the 80s, full-grown Audrey II was barely bigger than our new Yorkipoo puppy. But to paraphrase and extrapolate from Martin Scorsese’s comment about Marvel movies and theme parks, audiences today expect so much more in the way of production value. ACT does not disappoint. Its Audrey II is a complicated contraption rivaling a stage character in its own right (Props to Thomas Bergamo). Thanks to Kent Overshown as the voice of the plant, Audrey II, who can sing with the best of them! Finally, the direction and choreography by Jason A. Sparks was masterful!

While I can pull a Woody Allen and dive deep into the gestalt of the play and how greed, power and lust and all those other deadly vices can corrupt even the most guileless and innocent of people, I will NOT. Instead, I will say, Little Shop of Horrors is a hoot-and-a-half which should be planted and rooted on your mobile calendar, right next to your next dentist appointment!

PS: Just for laughs, one should see Jack Nicholson as the masochistic patient who goes to the dentist in the 1960 fil available on You Tube. His part was changed into the sadistic dentist, although Bill Murray played the part in the 1986 remake.

I’m really not a one-note, however, I’m compelled to begin this review with a sentiment from a prior post: we have our own little piece of The Great White Way right here in CT; Ridgefield, CT to be precise, and it’s called A Contemporary Theatre of Connecticut (ACT). Life sometimes gets in the way; however, and Pillow Talking couldn’t make it to review at ACT until the wonderful closing show of their inaugural season, The 25th Annual Putnam County Spelling Bee, but barring any major catastrophes, we’ve made it a point never to miss another of their productions! That’s because what they’ve created here in Fairfield County is downright magical.

They’ve opened their second season with the classic Little Shop of Horrors, where they’ve thrust the literally larger-than-life, one-and-only, man-and woman-eating wonder known as Audrey II onto a spectacularly dressed stage alongside a cast of incredibly talented triple-threats. I guarantee once you’re settled into your seat (and there are NO bad seats in the house) you’ll think you really have been transported to Broadway. Hey, if a total eclipse of the sun can make a plant talk, maybe it can teleport, too! If you’ve never seen Little Shop of Horrors, do your self a favor and catch it here. What better time, too, with Halloween just around the corner? It’s a darkly comedic rock musical that’s over-the-top campy in all the best of ways, and just plain, laugh-out-loud fun!

Little Shop, with book and lyrics by Howard Ashman and music by Alan Menken (based on the film by Roger Corman, screenplay by Charles Griffith) tells the story of the nebbishy and luckless Seymour Krelborn who just can’t seem to catch a break. His boss, Mr. Mushnik, is a tyrannical, failing Skid Row flower shop owner. Seymour’s secret crush, the ditzy Audrey, is dating the sadistic dentist, Orin Scrivello who’s as adept with a drill as he is with his fists. And his new BFF is a deviant plant from another world who all but sucks the last drop of lifeblood out of him.

Audrey II is like no plant anyone’s ever seen and she promises to take Seymour far beyond his boring existence; but like anything in life, there are no shortcuts to fame and fortune, and it surely comes at a price. It’s not long before the carnivorous, cajoling, and ever-growing plant corrupts the impressionable Seymour and he’s willing to do anything to please both Audreys for a crack at a much-improved future, despite the wallet-draining investment he must make in colorful Band-Aids. But like selling one’s soul to the devil, Seymour basically gets what’s coming to him, although not before plenty of other’s face a similar peril. 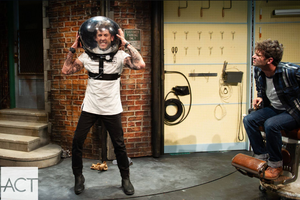 Robb Sapp is an incredible Seymour, playing the meek botanical genius to the hilt. He’s got great chemistry with the beautiful Laura Woyasz, who’s got both legs and pipes for days. William Thomas Evans nails it as the often detestable Mr. Mushnik. Daniel C. Levine is the man of many disguises, who’ll have you alternately rolling and recoiling as the deranged Orin; but he’s also terrific as Bernstein, Luce, Snip and “Everyone Else.” Kent Overshown is fabulous as the Voice of Audrey II, as was his counterpart and complement, Thomas Bergamo as the Audrey II Puppeteer. Kadrea Dawkins as Chiffon, Ashley Alexandra Seldon as Crystal, and Rachelle Legrand as Ronnette, blow doors as the hip street urchins and chorus girls who help to narrate and pull the story together. Last but not least, Jaclyn Mercer and Ian Shain are perfect as the Ensemble and Female/Male Swings, respectively.

There are many moving parts, literally, to a production such as this. Kudos to the large production team, some of which include: Jason A. Sparks, Director/Choreographer who has a keen eye and true attention to detail; P. Jason Yarcho, Music Director; Daniel C. Levine, Artistic Director; Bryan Perri, Music Supervisor; Isaac Hayward, Associate Music Director; Ryan Howell, Scenic Designer (what a bang up job!!); Jack Mehler, Lighting Designer; Ryan Park, Costume Designer (fabulous!); John Salutz, Sound Designer; Tommy Kurzman, Wig and Hair Designer; Abigail Bueti, Props Master, and the many, many others! Special shout out to the band: Yarcho as Conductor and on Piano; Hayward as Conductor and on Piano (10/31-11/3); Tom Cuffari on Keyboards; Jeff Carlson on Electric & Acoustic Guitars; Arnold Gottlieb on Electric Bass; and Dennis Arcano on Drums & Percussion.

ACT’s Little Shop of Horrors is devilishly delightful and all-out delicious fun. There’s no better time to, as Daniel C. Levine says, “Say ‘Aaaaaaahhhhhhhhhhh!’” than right now. But I recommend you fill your mouth with some goodies from the concession stand and stay far, far away from Dr. Scrivello’s drill!