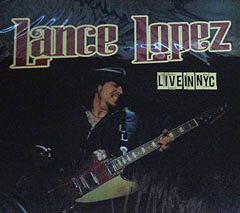 If the question is, “What do you get when you mix Stevie Ray Vaughan and Jonny Winter with a dash of Pat Travers and then soak it liberally with jet fuel?” Lance Lopez would be the answer.

The Lance Lopez CD Live in NYC opens with a blistering kick-ass blues riff and it only builds from there. His vocals are as strong as his guitar playing and his guitar playing is a bar-setting blaze of power and tone. His solos are brilliant with all the technique and gymnastics you would expect from a “guitar god” yet he never ventures into the pitfalls of showing off, losing the feel and soul that makes his music believable. He means what he plays and it shows in every note. His band is a 3-piece kick-ass machine with Mike Nunno on bass and Chris Reddan on drums. Both are exceptional at their respective instruments and work perfectly as team supporting Lance.

If you like your 3-piece blues rock loud, proud and jaw-dropping, see them live. Definitely get this CD in the meantime. I was given this CD to review and I’m not giving it back. If you buy this CD or see him live because of this review — you’re welcome.