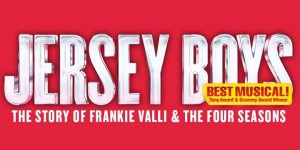 For information and tickets for upcoming shows

Sometimes I wish I had a list of all the shows and concerts I’ve seen over my career as a dedicated culture vulture. Some I remember like it was yesterday, like when I saw Frank Sinatra perform in a pink leisure suit back in the 70s. Others I have a dim, blurry memory as if it was in another (or someone else’s) life. I do remember, however, the Evening of Solid Gold at Madison Square Garden when Frankie Valli and the Four Seasons headlined, followed on the bill by Jay & The Americans, The Four Tops and Tommy James. Oh what night! Late December back in ’73, what a very special time for me. What a concert, what a night (even if I did get a nosebleed from the uppermost section of the Garden).

As a tween, I was an atavistic throwback when it came to music. While most of my peers were grooving to the Beatles and the British Invasion bands, I was discovering the sounds of the late fifties: doo-wop, Elvis, Ricky Nelson, Bobby Rydell, Dion and the Belmonts, etc. I loved the Four Seasons and Jay & The Americans. Seeing them in concert was a “magic moment” for me (pun intended).

When Jersey Boys premiered on Broadway, there was no doubt that I was going to see it – not. And when Clint Eastwood’s movie of the same name came out, there was no way I was going to miss it – not. As John Lennon once said, [l]ife is what happens while you’re busy making other plans.” Third time was a charm though, when I was finally able to take it off my bucket list when the national tour hit the Bushnell. And what did I think?

Oh, what a night! It was everything I thought it would be and more (no pun intended). Ok, so even if the first act was a bit choppy until the hits started flowing, I loved it. It was hard not to stand up and sing along with such hits as “Sherry,” “Dawn (Go Away),” “Working My Way Back to You,” “Beggin’” and my all-time favorite – “December, 1963 (Oh, What a Night).”

The cast was superb. Aaron De Jesus played Frankie Valli to the hilt. If I closed my eyes, I would have sworn that it was the real Valli up on stage singing his heart out. And yet, De Jesus was not a caricature or simply rendering an excellent impression of Frankie Valli. Indeed, Mr. De Jesus was a consummate actor that made the part his own. Keith Hines showed not only his formidable acting, singing and guitar playing chops as Nick Massi, but he also demonstrated his fine comedic skills as well. He was positively hilarious. Rounding out the original four, great portrayals and performances also were turned in by Cory Jeacoma as the brilliant Bob Gaudio and Matthew Dailey as the talented, but somewhat sleazy Tommy DeVito, the man credited for starting everything including putting Frankie Valli on the stage for the first time. Nods also must go to a great supporting cast far too numerous to mention individually. We must thank veteran director Des McAnuff and choreographer Sergio Trujillo for show-stopping numbers at every turn.

I believe there are several reasons why the Jersey Boys have captured the hearts of theatregoers everywhere. First, iconic songs that will never go out of style thanks to the musical genius of Bob Gaudio and lyrics by Bob Crewe. Secondly, the drama, fraught with all of the ups and downs and heartbreak that inevitably follow massive success. We must thank Marshall Brickman & Rick Elice for a great, engaging book. Third, the story is archetypical of the American Dream: a rags to riches story of real people with all of the flaws, insecurities, and foibles we share in our humanity and yet we continue to move forward. Finally, and most importantly, the play demonstrates the age old adage that if you pursue your passion with undying devotion, sometimes dreams do come true.

As Frankie Valli says at the end of Jersey Boys, “[t]hey ask you ‘what was the high point?’ Hall of Fame, selling all those records, pulling ‘Sherry’ out of the hat, it was all great. But four guys under a street lamp, when it was all still ahead of us, the first time we made that sound, our sound. When everything dropped away and all there was was the music. That was the best.”

Four-time Tony Award-winning Jersey Boys is like a five-star, full-course meal, beginning with a delightful, savory amuse bouche and ending with a luscious, can’t-get-enough-of-it dessert where you really will get to have [your] cake and eat it too! And whether you know everything about the historical and remarkable rise of the New Jersey-bred singing sensations, The Four Seasons, or nothing at all, it won’t matter a bit; because unless you’ve been living under a rock, you’ll surely have heard some if not most of the toe-tapping, chair-dancing, sing-along score. Myriad tunes that made the quartet famous pepper the infectious, delectable feast for the eyes and ears like the heavy-handed crank of a waiter’s pepper mill.

And despite their international fame, Frankie Valli, a/k/a Francesco Stephen Castelluccio, is quoted as having said, “I do belong to Jersey. There’s no doubt about that in my mind. They have been so loyal and so good to me; how could I possibly belong any place else?” Hence, the moniker the Jersey Boys, which for them says it all.

Jersey Boys, with book by Marshall Brickman and Rick Elice, music by Bob Gaudio, and lyrics by Bob Crewe, may be dubbed a “jukebox musical” – which by definition is one which uses previously released popular songs as its score – and this certainly is. However, unlike some productions which either do not have a strong storyline or cram in countless songs just to see how many will fit, Jersey Boys is an engaging and revealing ride down memory lane which likely will leave you wanting to hear even more of their entertaining hits; or maybe you’ll just want to hear the same ones again, which is why you might want to snatch up one of the ever-popular CDs at the merchandise stand.

Now prior to seeing Jersey Boys at Hartford’s The Bushnell Center for the Performing Arts, my only knowledge of The Four Seasons and front man Frankie Valli, the crooner with the trademark falsetto and three-octave range, was of their music; and my earliest recollection is of the title song of one of my all-time favorite films, Grease, starring John Travolta and Olivia Newton-John, sung by Valli. But the genesis of group was well before my time and I knew nothing of it, the group’s members, or the bumps they faced along the way.

A story told dynamically in “four seasons,” Jersey Boys utilizes the Rashomon effect, providing narration by each of the four original band members from their individual and often differing perspectives. We learn of their personal lives, loves, and losses, in addition to the early retooling and refashioning of the group, their spectacular ascent to stardom, later reinventions, and the final break-up. 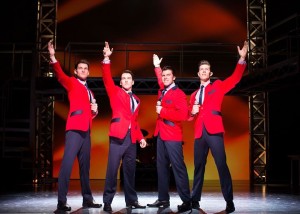 For that tantalizing first bite – the amuse bouche – is the opening number of Act I, “Ces Soirées-Là,” a 2000 French pop-rap song based on the Four Season’s 1976 “December, 1963 (Oh, What a Night).” Founding member Tommy DeVito enters and begins to spin the yarn told as “Spring” – and the birth of the newest incarnation of the band when they’ve added their final member, teen musical genius Bob Gaudio. This is followed by Gaudio’s narration with the youthful flourish of the soon-to-be-dubbed The Four Seasons – here in “Summer” it’s all light and no darkness, and the full expression and vitality of the group explodes onto the music scene. Act II’s “Fall” is led by Nick Massi who then chronicles the group as it matures, the original members’ collective last hurrah, and their break-up. Finally “Winter” is narrated by Frankie Valli himself who talks of slowing down and eventual letting go. And then for the (bitter)sweet-ending, each founding member takes the stage after The Four Seasons’ 1990 Rock and Roll Hall of Fame induction, brimming with pride.

I personally found The Four Seasons’ story captivating, including such tidbits as how Francesco Castelluccio became known as “Frankie Valli” and how/where The Four Seasons got their name; as well as details of the band members’ crime-filled pasts, connections to the mob, and even their early friendship with future Academy Award-winning actor Joe Pesci. The band struggled with identity crises, personality clashes, family tragedy, and financial woes but managed to keep a clean-cut public image and through grit and determination, eventually rose to become one of the most beloved pop/rock bands of all time.

Directed by Des McAnuff, choreographed by Sergio Trujillo, musical supervision, vocal/dance arrangements and incidental music by Ron Melrose, and with an utterly incredible cast, the national tour of Jersey Boys is pure delight. Aaron DeJesus as the tenacious Valli channels the master’s unmistakable voice and delivers a spot-on, charismatic performance. Matthew Dailey is fabulous as the hustling, scheming DeVito – the smooth operator who can’t seem to keep himself (or anyone else) out of trouble. Cory Jeacoma’s Gaudio is both boyishly charming and sharp beyond his years as the essential cog in the wheel to the group’s success. Finally, Keith Hines delivers an often hysterically funny performance as Massi, the somewhat dull but talented man of few (monotone) words. 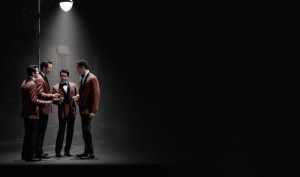 Valli once said, “We were looking for something new. It was very important to establish a sound, so that people heard a record on the radio and knew immediately that it was you.” And they did just that. Huge hits such as “Earth Angel,” “Sherry,” “Big Girls Don’t Cry,” “Walk Like a Man,” “My Eyes Adored You,” “Let’s Hang On (To What We’ve Got),” “Working My Way Back to You,” and so many others are an instantly recognizable, non-stop rush of musical adrenaline through your veins. And it’s also clear theirs was a story waiting to be told as Jersey Boys has been a critical success which began first at California’s La Jolla Playhouse in 2004 then later proceeded to Broadway in 2005, and then numerous national and international tours and productions which are still going strong. Just as these songs will live on, even if you missed Jersey Boys at The Bushnell, you’re sure to have the opportunity to catch it elsewhere. And for certain, we look forward to The Bushnell bringing us more incredible entertainment to its Hartford boards.