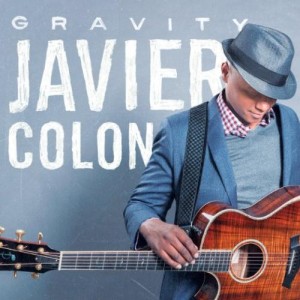 You may remember the name if you are a fan of TV’s The Voice – because he won season 1! He has also opened for Maroon 5 (front man Adam Levine was Javier’s coach on The Voice). He’s toured much of the world, done several albums in various genres, and now with the release of his 6th album Gravity, he’s finally doing it his way. What’s more, he’s also a hometown boy from Connecticut!

I’ve listened to the entire album at this point and it reminds me of something – of albums from the past. Not in the same style or genre or anything, but the quality of them. He’s done a record that is consistent and well-produced, with great songs, lyrics, and melodies. Yes. But there is that extra thing that comes along every so often. I know I’m dating myself here but remember Carol King’s Tapestry? Or Cindy Lauper’s first record? Foreigner’s first record? Boston’s first record? Those where every song could be a hit and was exactly right for the time? That’s what this record reminded me of. It’s perfect for THIS time and there really isn’t a stand out song because they all stand out!

Most of the songs are acoustic guitar or piano-based with a nice pop rhythm section. You will find no Les Pauls [guitars] through Marshall Stacks [amplifiers] here. It’s very easy on the ears. His style is sorta like if Bruno Mars and Jason Mraz had a baby. Now having a basic concept of human reproduction, by baby I did mean if they made a record together. If I HAVE to pick a favorite, there is one track called “The Hard Way” that really hits you in the heart as a “boy meets girl, girl becomes the ultimate challenge” kind of ballad. “Walking Blind” is also a beautiful ballad, sparsely produced with acoustic guitar, piano, and strings. There is also a song called “For a Reason” which is a duet that mixes a Stevie Wonder vibe with Chicago in a very good way. As a bonus track you get his very heartfelt take on Leonard Cohen’s “Hallelujah” which is everything you would expect and more.

If soulful pop is your thing, you can’t ask for anything more from Javier or this record. Bullseye.

Rick Tedesco is a guitarist, singer, songwriter, and producer who runs the Guitar Hangar music store in Brookfield, CT (check him out at www.guitarhangar.com) as well as the Guitar Hangar recording studio. A 47-year veteran in the music business, he has worked with greats like Ian Hunter, Alice Cooper, Def Leppard, and the Rock and Roll Hall of Fame-inducted, original Alice Cooper band members as well as many local musicians whom he has helped turn song ideas into finished CDs. He currently is working with his writing partner, Kevin Hupp, and the band Psycho Merchants on their second CD and also is a guitarist for The Carrie Ashton Band.