Pillow Talking’s Review of INTO THE WOODS 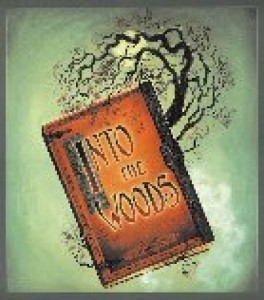 I have been a big fan of fairy tales as far back as I can remember and I still am – I guess I’m a sucker for those who’ve had it rough, worked hard, and finally achieved their happily ever afters. Maybe having two girls and watching a lot of Disney princess movies with them when they were younger has had something to do with my continued fondness for the genre; but then again, I’ve also read countless fairy tales to all of my children (I have two boys, too). And on top of it my girls and I are totally hooked on ABC’s Once Upon a Time, which twists and layers nearly every known fairy tale character into the most delightful, delectable pretzel you can imagine.

When I had the opportunity to see Into the Woods the first time I was beyond excited. It wasn’t the stage version, however, it was in 2014 and on the big screen. It was larger than life with fantastic sets and costumes, dynamic singing, and of course, a killer cast (can you say Meryl Streep, Johnny Depp, Chris Pine, Emily Blunt, Anna Kendrick, Tracy Ullman…among others?!) But when all was said and done, I recall feeling as if there had been something was missing… I never could put my finger on it. And it wasn’t because everyone didn’t get their “happily ever after” (as the original book is written, that was precisely the point).

So when we heard that The Opera House Players were doing Into the Woods, I was thrilled to finally get to see Stephen Sondheim and James Lapine’s classic on the boards. We always are impressed by the creative imaginings at Broad Brook and I couldn’t wait to discover how they were going to weave together the many tales, and of course see how different the film and stage productions were apt to be.

Into the Woods is a musical which bridges the fairy tales of Charles Perrault and the Brothers Grimm, examining the numerous characters’ wishes and life choices, and ultimately the consequences of their actions. The central protagonists, a baker and his wife, are childless and come to learn that there has been a curse placed upon them. In order to undo the spell and fill their barren house, they must appease the neighboring witch who has ordered them to obtain four items for her. When the pair sets out, their story traverses the lives of countless others along the way. While Into the Woods might appear on the surface to be a yarn for children, it is both humorous and dark, and contains a sprinkling of adult elements as well.

Artistic director Sharon FitzHenry and music director Bill Martin did an excellent job staging this wild ride, despite some minor spatial limitations at Broad Brook (I didn’t know where to look when everyone was elbow-to-elbow on stage!). The Witch, played by Lindsay Botticello, is the perfect blend of sarcasm and wickedness that one expects of the vain, self-serving sorceress. The Baker, Michael Graham Morales (whom we saw in She Loves Me, our first and very excellent experience at Broad Brook) is outstanding, both endearing and believable. His Wife, played by Nikki Wadleigh, is great as his stronger and determined (yet fallible) partner. All three also have tremendous voices. Kellie Comer, who we’d enjoyed in Avenue Q, is the plucky yet cloying Little Red Riding Hood, and demonstrates her strong vocal talents yet again. 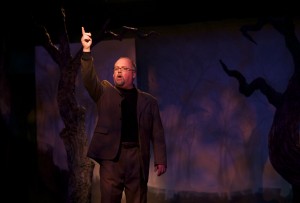 Gene Choquette is fabulous as the Narrator and perfectly puckish as the Mysterious Man (how intolerable that beard must be!). Chelsea Kelle as Cinderella is superb as the soft and kind-hearted princess. Randy Davidson is terrific as the sweet but often misguided ginger-haired Jack and Amy Rucci as his mother, does a fine job keeping him in line. Shaun O’Keefe is a very bad Wolf, strutting around in his leather jacket with his tail comically bobbing. Kaytlyn Vendeloecht wears her tresses well as the imprisoned Rapunzel, and has a lovely voice to boot. Princes Gavin Mackie (Cinderella’s) and Tim Reilly (Rapunzel’s) play very well off each other, stealing scenes with the very humorous “Agony” and their, ahem, switch-ups in the end (no spoilers here!). Sherrie Schallack is great as the Wolf’s tasty treat and very nimble Granny; Anna Giza as the Stepmother and her daughters Florinda (Aileen Merino Terzi) and Lucinda (Jen Augeri) are the ones you love to hate as the hard-hearted and selfish foils to Cinderella’s happiness. Emily Smith brings softness to Cinderella’s Mother, and LARGEness to the Giantess. Thomas Schutz plays well the snippy and surly Steward and expert shoe fitter.

With a cast this large, Broad Brook kept the staging more to a minimum this time around. Kudos to scenic designer Francisco Aguas, scenic artists Dawn Bird and Audrey Corman, and the entire set/prop construction crew for pulling it all together. Moonyean Field had her work cut out for her (pun intended) and did a wonderful job with costumes, and shout outs also go to her costume “posse” as well as hair and makeup “guru” Erica Romano. As always, a phenomenal job done by the orchestra: music director/keyboardist Bill Martin, percussionist Kevin Barker, Phil Plott on reeds, and Charlie Savage on synthesizer.

There’s always a moral to every story, right? Well, while these colorful characters had to be careful what they wished for, you won’t have to be so judicious when you make your way Into THESE Woods. And for certain, you won’t be sorry – because if your wish is for a great night of theatre, as always, Broad Brook delivers! 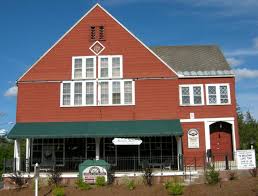 For the record, puppets and fairy tales just weren’t my things. Animation isn’t my thing either. To me, live theatre meant live actors. For decades, I resisted seeing Avenue Q, the thought of raunchy puppets simply was unappealing to me. But when Broad Brook, one of our favorite theatres, did the production, as a loyal reviewer I had no choice but to go and see it. And, as you can see from my review, I loved it. So when Broad Brook put on its production of Into the Woods, I went with higher hopes and less resistance. And guess what? I loved it, too! As I’m getting older, maybe I’m getting less grumpy and more sentimental – not. I probably will not see the film version of Into the Woods and have no intention of watching Once Upon a Time on Television (especially because I’d have to binge watch to catch up).

But I thoroughly enjoyed Into the Woods. It was smartly directed by Sharon Fitzhenry (Artistic Direction) and Bill Martin (Music Direction), well-acted and at all times engaging. It features an all-star cast of fairy tale characters (today the audience demands multiple franchises – we aren’t satisfied with just Captain America – we need all of the Avengers in one movie). The fairy tale notables and their individual tales collide with the story of a baker and his wife who desperately want to have a baby. In Oz-like fashion, they are given a mission by a local witch to go into the nearby woods, find some rather bizarre items and give them to the witch in return for guaranteed fertility. Along the way, run into (physically and literally) Prince Charming, Cinderella, Jack, Little Red Riding Hood, Rapunzel and, of course, the Big Bad Wolf.

The story’s attraction is that the play shows you what happens after the characters find their “Happily Ever After.” Is happily ever after even a realistic possibility? (We certainly hope and strive for it.) Much like the play, Fifth of July, the curtain is pulled away and we see what happens the day after the fairy tale ends. Of course, music and lyrics by Stephen Sondheim don’t hurt either! 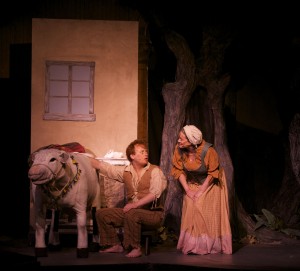 A wonderful cast brings the fairy tale characters to life. Michael Graham Morales whom I loved in Opera House’s She Loves Me is back as the Baker. He brings this charming, everyman-esque essence to the role. Relative newcomer Lindsay Botticello as the Witch is awesome. She brought both her acting and singing chops to the role (and boy, can she sing). Since I never saw the film version with Meryl Streep in the role, Ms. Botticello will remain the one to whom I will compare future performers in the same role. Kellie Comer who was so good as Kate Monster in Avenue Q is back as Little Red Riding Hood. She clearly carves out the role as her own, knife and all. Carrot top Randy Davidson is perfectly cast as Jack (it’s amazing how well he cleans up by just combing his hair!). Amy Rucci also is spot on as his vacillating mother. Shaun O’Keefe plays the wolf with nice comedic timing, milking the audience for more laughs with his mannerisms and expressions. Chelsea Kelle brings the perfect balance of vulnerability and strength to Cinderella. As in the case of Michael Graham Morales, she has an everywoman-esque persona that she brings to the role (which probably is why I found myself rooting for both of them). 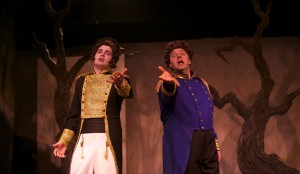 Gavin Mackie and Tim Reilly were both charming as, respectively, Cinderella’s Prince and Rapunzel’s Prince. The actors made a good comic duo, playing nicely off of each other. I especially liked their rendition of “Agony.” No strangers to OHP, both Kaytlyn Vandeloecent (Rapunzel) and Gene Choquette as the Narrator represented another two perfect casting choices. And I must say, without spoiling anything, that veteran actor Choquette must be one of the best quick-change artists in the biz. Props must be given to actress and singer Niki Wadleigh as the Baker’s Wife. She was so believable in the role that I am still made at her for her fling with Prince Charming. Rounding out an excellent cast were Anna Giza (Stepmother), Glenn Gordon (Cinderella’s Father), veteran actress and dancer Aileen Merino Terzi (Florinda) Jen Augeri (Florinda), (both Aileen and Jen did great characterizations of two of the three blind mice); Sherrie Schallack (Granny) and last, but not least, Tomas Schutz as the Steward.

Putting on my producer hat, Into the Woods is a tough play to produce for many reasons. Kudos to Artistic Director Sharon FitzHenry and Music Director Bill Martin. The blocking and staging were excellent especially given the spatial limitations of the stage. If I were being very knit-picky, the only critique I had was that there seemed to be a minor issue with the audio on some of the body microphones – either that or there weren’t enough microphone channels for such a large cast. But it was minor and I am certain addressed for any future performances.

The Broad Brook Opera House finished off a stellar season with Into the Woods. Pillow Talking eagerly awaits next season!