In so very many ways, colossally prolific playwright Robert Patrick was ahead of his time. Whether prescient, perceptive, or just plain pioneering, Patrick left us with such legacies as the one-act and ten-minute plays (and for that, he teasingly apologizes). In addition, he was instrumental in the Off-Off-Broadway theatre movement of the early 1960s at Greenwich Village’s infamous Caffe Cino; a development which has continued to allow playwrights, actors, and other creatives to go where none have gone before. And possibly among his most notable achievements, he paved the way for gay artists to openly express themselves through the shared vehicle of theatre – which, incidentally, may be nowhere more apparent than in his brilliant 1964 work, Haunted Host, in which Harvey Fierstein had his first legitimate stage appearance as a male performer.

Robert Patrick, who hit the Great White Way in 1975 with Kennedy’s Children, delved into topics which virtually no one dared to or even had yet to ponder back in his heyday in 1960s-1970s-1980s New York. Dubbed the city’s “Most-Produced Playwright” in 1972 by Samuel French, Patrick truly is a legend, with over 60 published plays, and likely hundreds more either unpublished, or literally lost during a time when computers and the internet did not exist.

This celebrated artist was the subject of the “Coffeehouse Chronicles #140” at Manhattan’s La MaMa, a venue founded by theatre innovator Ellen Stewart, which has a “worldwide reputation for supporting fearless and provocative theater while helping artists gain a foothold in New York.” Patrick himself also began producing plays at La MaMa in 1965. To a packed house, this highly engaging and enlightening “Coffeehouse” panel was moderated by award-winning playwright William M. Hoffman, with whom Patrick worked during the early days of the Off-Off-Broadway movement. Clips from many of Patrick’s works along with delightful anecdotes and banter from numerous guests, peppered the two-hour portrait of this charming, highly intelligent, and exceptionally talented man.

Fast forward to the evening performance at La MaMa’s The Downstairs, titled Hi-Fi/Wi-Fi/Sci-Fi: Predictions of Past Present and Future – a re-staging of four of Patrick’s incredibly forward-thinking works paired with the world premier of a new piece; all of which are thrust into our technologically advanced, digitized, and often over-stressed 21st century with La MaMa’s inventive, experimental theatre bravura. Masterfully directed by Billy Clark and Jason Trucco in New York, along with a synchronized segment by Park Il Kyu in Korea, this collaboration between CultureHub (which combines art and technology) and Seoul Institute for the Arts (a driving force in the Korean art and culture scene) introduced an entirely new audience of theatre-goers to Patrick’s brilliant and layered texts. 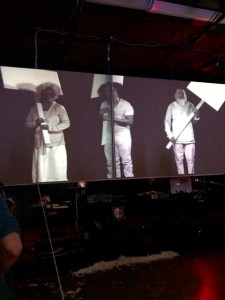 Both in spite of and in sync with today’s Digital Revolution, the common theme throughout all five works is the interconnectedness of individuals, or for a more Jungian analysis (a la Carl Jung, father of analytic psychology) the “collective unconscious” or the commonalities shared by humankind. The first work, “Action,” involves two writers (one young, one old) who are writing each other’s lives and living it out in real-time. The second, “Camera Obscura,” is so prophetic in today’s world of virtual everything, it’s scary – two lovers who develop a long-distance relationship, become frustrated as their communication is fraught with blunders and misunderstandings due to a 5-second transmission lag-time.

Possibly the most Jungian of the works is “All in the Mind” where the line between individual and collective consciousness has been completely blurred. It is an incredible interplay of live action and pre-recorded projections on screens which flank the room’s perimeter. “Simultaneous Transmission” is an evocative piece exploring violence and aggression, us and them, with a head-scratching ending. Finally, in “Anything is Plausible,” we are given the gift of an introduction by Robert Patrick, followed by a stimulating monologue and feats of athleticism (you’ll have to see it to learn more!) where one is left to wonder if the orator is in fact real or a virtual creation.

Through the use of multimedia elements including 360-degree screens, audio, live action, and nearly all black-and-white in staging and costuming, this exhilarating and dynamic piece of theatre brings the audience directly into the action. Members move from room to room, sit and stand, and even are given cups of Kool-Aid during the performance. The actors and a crew of other supporting artists are highly-skilled and spot-on, adeptly bringing this provocative work to life.

Principals Agosto Machado, John Gutierrez, Valois Marie Mickens, and Yeena Sung are phenomenal. Their collective performances are powerful, relevant, and haunting. They work together like a well-oiled machine and their blend of youth and wisdom generate the perfect and poignant juxtaposition of Patrick’s foresight and divination with CultureHub and Seoul Institute’s modern creativity and vision.

This hour-long spectacle of past, present, and future is a historical, social, cultural, psychological, and technical delight. Run, don’t walk, because while its messages may be move beyond the time barrier, you only can catch it at La MaMa through February 19.

You’re right, you’re always right, yes, yes, of course. Love will survive. They couldn’t kill it with purple hair-do’s, they can’t kill it with a plague. Boys will fall in love with each other’s earlobes if all else should fail. Because it never really was about sex, was it? It was about love.  – Robert Patrick (playwright)

The greatness of a man is not in how much wealth he acquires, but in his integrity and his ability to affect those around him positively.  – Bob Marley

You know when you’re in the presence of greatness. It’s an intuitive, sixth-sense kind of thing. I’ve only felt it a handful of times. Once was when my wife and co-reviewer interviewed Robert Patrick via Skype. Robert Patrick, the playwright, was dubbed by Samuel French, the publisher, in 1972 as “New York’s Most-Produced Playwright.” His play Kennedy’s Children was produced on Broadway in 1975 (and rumor has it that it is set for a revival). He was a pioneer in gay theatre, a leader in the Off-Off-Broadway movement, and one of the principal creators of the short one-act (ten-minute) plays that flourish everywhere today. His presence, charisma and sagacious wit could not be dulled by the Skype’s woeful one-chip camera and poor audio. (Read Pillow Talking’s Interview with Robert Patrick.)

The next time I felt I was in the presence of greatness was when my wife and I met him in Los Angeles for dessert at the infamous House of Pies. He was humble, self-effacing and thoroughly captivating in person.

Why then did one of the most prolific playwrights of his time fall into self-imposed obscurity and not write again for years? There are myriad personal decisions and judgments that only he can address. But he does readily admit that he did not handle success well – and that’s only if you define success in terms of materiality. If you use Bob Marley’s definition above, then Robert Patrick is one of the most successful playwrights in the world. 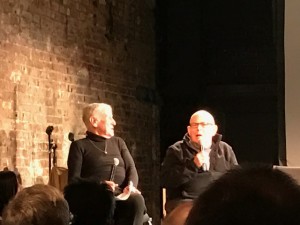 It was incredibly gratifying to see the career and life of Robert Patrick celebrated at the 140th “Coffeehouse Chronicles” presented at La MaMa in New York City. And how appropriate since Caffe Cino (no longer in existence) and La MaMa were where Mr. Patrick’s playwriting career was launched along with the likes of Lanford Wilson, William M. Hoffman, Sam Shepard and many others. A panel moderated by William M. Hoffman, and panelists who worked with Robert Patrick included such theatre luminaries as Michael McGrinder, Natalie H. Rogers, Jordan Beswick, Carol Nelson, Magie Dominic and Jason Jenn. The session featured a lively discussion led by Mr. Hoffman and Robert Patrick in the flesh, and included live performances and archival footage. (One of the clips featured was from Robert Patrick’s Play by Play, directed by my childhood friend Jan Gliber, who also was responsible for introducing my wife and me to Robert Patrick.)

Following the Coffeehouse Chronicles was the premiere of Hi-Fi/Wi-Fi/Sci-Fi – Predictions Past Present and Future (HFWFSF). The play was presented by CultureHub in association with the Seoul Institute for the Arts and was a retooling and reworking of four of Robert Patrick’s one-act plays which were considered by many to have adumbrated the age of video and the internet. HFWFSF included in the following order “Action,” “Camera Obscura,” “All in the Mind,” “Simultaneous Transmissions,” and the world premiere of “Anything is Plausible.” 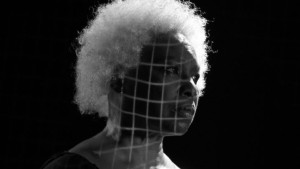 In line with La MaMa’s mission of being an experimental theatre club, the plays were masterfully updated with the incorporation of multi-media and interactive audience participation. It was stunning to see how applicable the themes and motifs of Robert Patrick’s plays written a half century ago are still just as poignant, significant, and relevant to today (as well as entertaining and enjoyable). There is no question that Mr. Patrick, like Jules Verne, is a visionary whose artistic work is timeless.

We have three highly talented and gifted directors responsible for this wondrous and thought-provoking production: Billy Clark and Jason Trucco; and how cool is this? The noted Korean Director Park Il Kyu directed a segment of the second play, “Camera Obscura,” that was performed live in Seoul, Korea and experienced in real-time in New York City. I’m not sure what all of that means, but it was fascinating to watch. 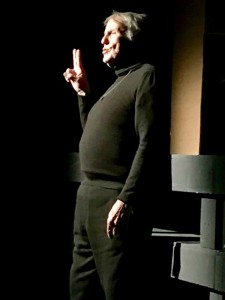 A cadre of brilliant actors performed in all of the segments. Each performance was electrifying in its own way. And each actor exhibited a vast range of emotional depth and versatility. Kudos to virtuoso performances by Agosto Machado, John Gutierrez, Valois Marie Mickens, Yeena Sung, and Harold Lehmann.

Robert Patrick is a creative genius, visionary, humanitarian, and beautiful human being. He also is a damn good singer!

HFWFSF is one of those rare instances of great theatre that must be experienced. Thank you La MaMa, CultureHub, Seoul Institute for the Arts and, above all, Robert Patrick, playwright. 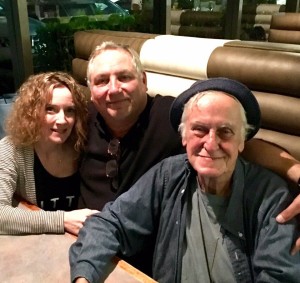