Pillow Talking’s Review of HENRY HATHAWAY: THE LIVES OF A HOLLYWOOD DIRECTOR by John Andrew Gallagher

Someday Productions LLC and Pillow Talking are pleased to present the following review of HENRY HATHAWAY: THE LIVES OF A HOLLYWOOD DIRECTOR by guest reviewer, filmmaker and author, John A. Gallagher 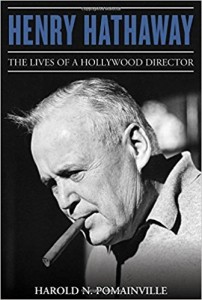 Henry Hathaway: The Lives of a Hollywood Director by Harold N. Pomainville 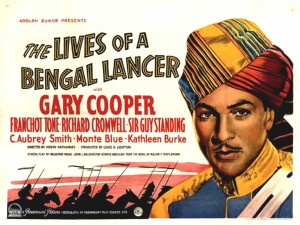 John Ford and Howard Hawks, William Wellman and Raoul Walsh, Frank Capra and King Vidor – these are the directorial titans of Hollywood’s Golden Age. Among those lost in the historical shuffle, however, is Henry Hathaway (1898-1985), who deserves recognition as one of the greats. After an apprenticeship as assistant director to important filmmakers like Victor Fleming and Josef von Sternberg, Hathaway began his directing career with a series of low-budget Zane Grey westerns starring Randolph Scott that put both men on the map. They led to his first major motion picture, the action adventure Lives of a Bengal Lancer (1935) starring Gary Cooper, earning Hathaway his only Best Director Oscar nomination. It was a smash hit and Hathaway enjoyed five decades of significant, quality work. 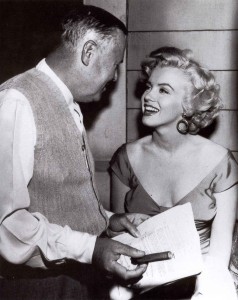 There were seven movies with Gary Cooper, including the remarkable romantic fantasy Peter Ibbetson; six with John Wayne including Duke’s Best Actor Oscar turn in the original True Grit; and Niagara, the movie that made Marilyn Monroe a superstar. He made the first outdoor feature in color, The Trail of the Lonesome Pine; a memorable Mae West vehicle, Go West Young Man; and one of Steve McQueen’s best, Nevada Smith; and one of nineteen Westerns Hathaway directed, including most of the Cinerama epic How the West Was Won.

Every one of these Hathaways is worth tracking down, all distinguished by his eye for performance, his unerring visuals, his strong story-telling prowess and narrative drive. He was the ultimate company man, contracted to Paramount from 1933 to 1941, to 20th Century-Fox from 1940 to 1960, and free-lancing after that until his retirement in 1974. He was also one of the wealthiest of filmmakers, with wise investments in real estate and a variety of businesses. Like Ford and Wellman, Hathaway was a very instinctive director; if you called them an artist to their face you’d be risking a punch in the nose, but make no mistake – these men were true artists. Like Ford and Wellman, Hathaway developed a reputation over the years as a holy terror on set. The late Dennis Hopper worked for him in three films: From Hell to Texas, The Sons of Katie Elder, True Grit, and told me: 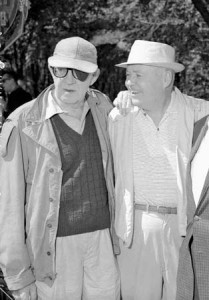 “He was a mean man on the set and a nice man to have dinner with. He hardly ever moved his camera so he wouldn’t lay dolly track or anything. He’d ask you to make really weird moves that were so uncomfortable. He wanted you moving, not the camera. We used to have debates about that. He couldn’t explain that to you, so he’d scream and yell, chomping his cigar, ‘Get those fucking people out from behind the goddam fucking wagon before I get my fucking gun and kill ‘em! What the fuck are they in the fucking shot for! Get that shitty ass horse out of there!’ It was just a totally crazy scene, but he was wonderful. These guys like John Ford, Hathaway, Wellman were all tough, ornery guys. They knew the business from the bottom up. I learned a lot from him.” (John Andrew Gallagher, Film Directors on Directing, Praeger Press, 1989). 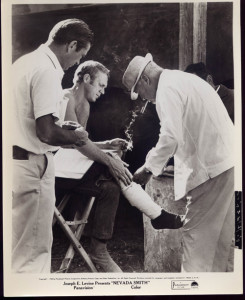 A proper biography has been long overdue; Harold N. Pomainville’s critical biography Henry Hathaway: The Lives of a Hollywood Director (Rowman & Littlefield, 2016) amply fills this void in our cinematic legacy with one of the best film books in recent memory. Pomainville explores Hathaway’s apprenticeship in the silent era, and discusses his nearly 70 films in an engaging and informative manner. Too many film “historians” lazily assemble their books solely from internet resources, without consulting primary sources. Special collections at USC, UCLA, the Academy Library, University of Texas Austin and other institutions hold daily production reports, memos, contracts, script drafts and countless ephemera from Hollywood’s heyday; Pomainville wisely consulted the Henry Hathaway Collection bequeathed by the director to the American Film Institute Louis B. Mayer Library. He also had access to the extensive oral history collection at Southern Methodist University, and enjoyed the cooperation of Hathaway’s son Jack for first hand chronicles of this complex man.

My only complaint about the book is that, remarkably, it does not include a filmography, forcing the reader to head to IMDb for comprehensive cast and credits. However, in its examination of Hathaway’s methods, the volume is essential reading for filmmakers, whether student or professional, in its coverage of Hathaway’s work with Gary Cooper, John Wayne, Marilyn Monroe, James Stewart, James Cagney, Lee Marvin, Steve McQueen, and so many more. It is also essential reading for movie buffs and vintage film fans. With this kind of track record, Henry Hathaway deserves to be better known. Now, thanks to Pomainville, this important and prolific filmmaker will hopefully receive his due with repertory theatre retrospectives to showcase his versatility. 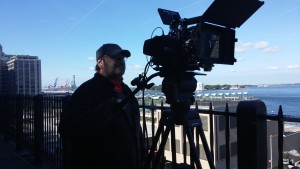 John Gallagher’s The Networker will be released by The Orchard in September 2017. His next feature as writer-director-producer, Sarah Q, stars The Sopranos’ Tony Sirico, Vincent Pastore, and Federico Castelluccio, and Academy Award nominees Burt Young and Sally Kirkland. He was the subject of our interview at
http://somedayprods.com/talking/interview-with-john-gallagher/