Pillow Talking’s Review Of HAVING OUR SAY 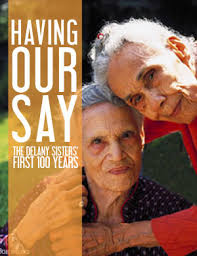 “Life is short, and it’s up to you to make it sweet.” – Sadie Delany

“When you get real old, honey, you lay it all on the table. There’s an old saying: Only little children and old folks tell the truth.” – Bessie Delany

When I grow up I want to be one of the Delany sisters – I want to have their eternal spunk, determination, humor, brainpower, devotion to family, and respect for the rights of all people. And like the gentler sister and schoolteacher Miss Sarah L. “Sadie” Delany, I strive to be the molasses – the “sweet” way she showed genuine kindness and empathy toward others. But like her sister Dr. A. Elizabeth “Bessie” Delany, a healthy dose of vinegar doesn’t hurt – nor does the (sometimes brutal) honesty that came along with her famous acerbity. 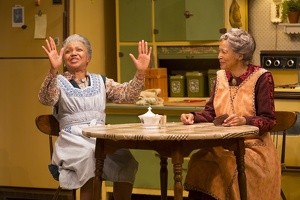 Despite their obvious differences, the centenarian Delany sisters both were utter dynamos who took in all the world had to offer and never accepted “no” for an answer. They were fiercely independent women who elected to remain single their whole lives, inseparable for over a century, and they lived the way they chose to live, adhering to certain self-imposed daily routines such as eating seven vegetables, watching the nightly news, and saying their prayers. Daughters of a former slave father and a mother who was one-eighth black; they were among ten children to Henry and Nanny; Henry, who became the first black Bishop of the Episcopal Church. And despite growing up in the segregated South and experiencing racial prejudice and discrimination (and sexism) of the times, they, along with their eight siblings and parents were well-educated and proud.

What began as an interview for The New York Times in 1991 about these incredible women, became an “oral history” book titled Having Our Say published in 1993, told in both forms by Amy Hill Hearth. It later was adapted for the stage in 1995 by playwright Emily Mann. The inimitable Hartford Stage in association with Long Wharf Theatre presented this dynamic and engaging work and we were so very fortunate to see it. 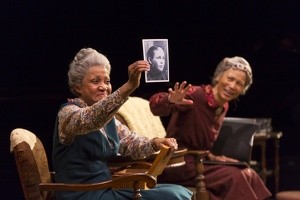 On a single, impeccable set with fabulous attention to detail, Having Our Say is presented as dialogue in three acts between Sadie and Bessie and their guests – the audience – in their Mount Vernon, NY home (their kitchen, dining room, and living room). The women are preparing a special meal to celebrate their father’s life as they do each year on his birthday. As “dialogue,” they speak to the audience, regularly breaking the fourth wall, and chronicling life through pictures (which also are projections around the upper perimeter of the stage) and personal accounts. Their individual molasses- and vinegar-laced perspectives make for an interesting and fascinating contrast, and at times they even speak “behind” one another’s backs when one sister leaves the room. 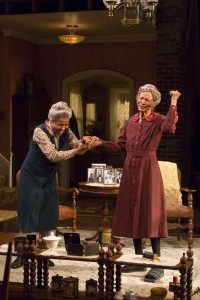 Enough cannot be said both for the playwriting, acting, and direction. Olivia Cole as Sadie and Brenda Pressley as Bessie are utterly flawless. They bring such amazing energy and charm to these remarkable characters as one only could imagine that the real-life sisters possessed. From their age-affected ambulation within the space (they are 103 and 101 at the time the tale is told) to their charismatic delivery of their lines, Cole and Pressley draw in their audience like a moths to a flame. Cole’s artistic career spans 50 years in professional theatre, film, and television. Pressley, a Broadway veteran, has countless credits also in theatre, film, and television. Despite the one set, two-character performance, the play never lost its momentum; the experiences of these two women through the eras and their attitudes toward life make for an infectious two hours.

Having Our Say was impressively directed by Jade King Carroll whose credits are equally as impressive. Kudos also to a fantastic crew – Alexis Distler for set and projection design; Karen Perry for costume design; Nicole Pearce for lighting; Karin Graybash for sound; Paul Piekarz for projection; Baikida Carroll as composer; and Carol “Cici” Campbell for wigs.

For many, the idea of aging evokes feelings of fear, but as my grandfather used to say, “It’s better than the alternative.” These two dynamic ladies give one an entirely different perspective – and the way they tell it (and demonstrate it) older is indeed wiser. Thank you Hartford Stage for presenting this truly phenomenal theatre experience!!

“To sustain longevity, you have to evolve”. —Aries Spears

I first heard about the famous Delany Sisters when their book (then touted as on oral history) hit The New York Times Bestseller List in 1993.  It was written by Sarah “Sadie” L. Delany and A. Elizabeth “Bessie” Delany with Amy Hill Hearth.”  The book remained on the list for an astounding 105 weeks and sold more than five million copies in its heyday (probably a lot more since then).  Having taught public speaking, there is something vital and engaging about someone’s real life history, especially in this case where the sisters’ lives spanned more than a century. 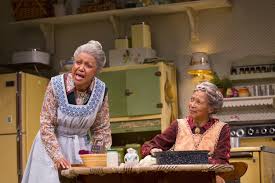 I am pleased to report that the play inspired by the book, written by Emily Mann and now at the Tony Award-winning Hartford Stage is just as vital, engaging and insightful as the book – even more so because of the sui generis nature of live theatre. In order for a one-person or two-person full-length show to succeed, the characters must be utterly mesmerizing, the storytelling awesome, and the pacing perfect. When I think of on- person and two-person shows that fulfill the aforementioned criteria, I think of Hal Holbrook in his iconic portrayal of Mark Twain Tonight!, Larry Luckinbill in the one man show LBJ, and, most recently, Sex with Strangers.  Having Our Say fits neatly within these parameters as well. 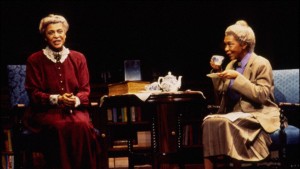 Hartford’s Having Our Say succeeds because of three primary reasons.  The first is Jade King Carroll’s lively direction and brilliant pacing.  Despite one set, two actors, and three acts, the play never feels long and draggy. The other two reasons for the play’s success is, of course, due to two superb performances by Olivia Cole as Miss Sadie Delany and Brenda Pressley as Dr. Bessie Delany.  They had such perfect chemistry together that I had to keep reminding myself that I was not in fact watching the real Delany sisters.  Indeed, the sisters were as different as night and day, and both Ms. Cole and Ms. Pressley effectively capture their differences in personalities and mannerisms.  But also they adeptly captured the bond of love that held them together for more than a century.

Although the Delany sisters were daughters of a former slave, they lived fairly privileged lives.  Their father became the first African-American elected Bishop in the Episcopal Church.  They were both well-educated, Sadie becoming a teacher and Bessie a dentist.  Like Buddha, it wasn’t until they were grown women venturing out into the world that the pervasive racial discrimination of the times became a rude awakening for them.  They settled in New York City and later in the suburb of Mount Vernon.  For over 100 years, they watched and reported the changing American landscape. 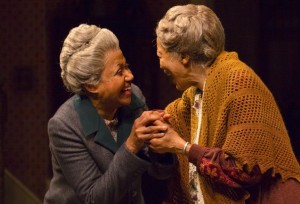 I must say that the most poignant and relevant parts of the play for me were the events they recounted that occurred in my life time – like the assassination of JFK and Martin Luther King, the segregation in the south and the turbulent sixties.  It is still hard for me to believe that there were separate facilities, schools, restaurants, and stores for blacks and whites during my lifetime.  At times the retelling was painful; other times humorous and joyful; and still other times inspiring.  But all times the oral history of our country sprinkled with the thoughts, affectations, and opinions of the sisters, was engaging. Don’t wait till you’re a 100 to see it!

Having Our Say: The Delany Sisters’ First 100 Years is more than just an oral history of our country.  It is a look inside the human spirit and the will and the drive of some people to evolve, adapt and make a difference.  Yes, one person – even two 100-year-old sisters – can make a difference.