Someday Productions LLC and Pillow Talking are pleased to present the following review of HAIL, CAESAR! 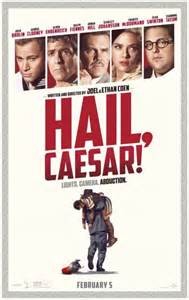 You expect certain things from established filmmakers. With the writing, directing producing brothers, Ethan and Joel Coen, creators of such classics as Blood Simple, Barton Fink, Miller’s Crossing, Fargo, etc., you expect quirkiness, colorful characters, actors cast against type, Mamet-like dialogue, biting sarcasm and satirical wit. And, I am happy to say, all of those things are found in their latest cinematic endeavor, Hail, Caesar! I am not happy to say that the sum isn’t greater than the parts and this film, when stacked against their previous ones, simply does not work. 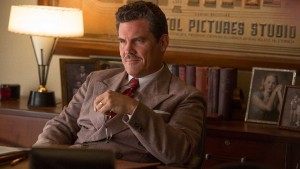 certain “stars” under contract to the fictitious Capitol Pictures in Hollywood circa late 40s/early 50s. The thread of diverse stores are held together by the studio’s “cleaner” and “equalizer” Eddie Mannix (Josh Brolin). Mannix has to deal with everything from actor abduction to covering up a pregnancy for the studio’s leading lady. Overworked and underpaid Mannix squelches the sins of studio with quick dispatch. Meanwhile, he remains conflicted over his personal venial sins of sneaking cigarettes and lying to his wife about it. 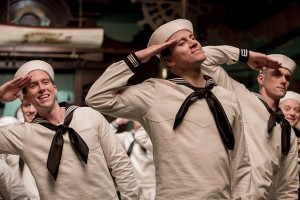 The acting was wonderful. Brolin certainly possesses the physical presence to hold the separate pieces of the story together. The ensemble cast made up of name actors and Coen alumni was spot-on; including George Clooney, Scarlett Johansson, Jonah Hill (blink and you’ll miss him, yet he is featured on the movie poster – talk about oxymoronic Hollywood), Frances McDormand, etc.  I felt like I was watching the classic comedy It’s a Mad, Mad, Mad, Mad World and playing name those cameos.  Alden Ehrenreich is terrific as the rodeo champion who is a fish out of water in Hollywoodland.  Channing Tatum is especially a standout in a Gene Kelly homage to On The Town. (It’s almost worth the price of admission just to see Channing.)

So what’s the problem? As a whole, the film didn’t hold together; it was draggy, at times pedantic and even self-indulgent (during an homage to Esther Williams’ mermaid/water dance films, I felt like standing up and saying, “Alright already! We get it!” There is only so far you can carry a joke. The predecessor Coen films were quirky, humorous and engaging without being pretentious. Here, it almost seems as if the Coen duo set out to make the most pretentious film possible. I felt as if the filmmakers were hijacked by copycat aliens who endeavored to make a Coen-like film rather than an authentic Coen film.

Having directed a satirical comedy in the past about Hollywood (and vowing never to do another one again because of the subjectivity involved), I understand how difficult the genre can be for the filmmaker. The Coen brothers have been amazingly consistent at making engaging, dark satirical comedies. Hail Ceasar!, unfortunately, is not one of them.

As a pretty flexible person with diverse interests, I often am able to find something good in everything. And even 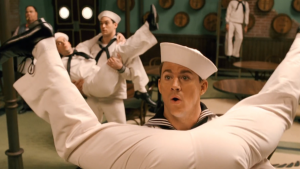 when that thing isn’t to my own personal taste, I usually can see how others might enjoy it or find it appealing. Keeping all of that in mind, I will say I had a nearly impossible time finding enough things to keep me entertained about Ethan and Joel Coen’s latest, Hail, Caesar! And since there only have been a few movies in my lifetime where I either did leave, or considered leaving before they were over, I can add this one to that short list. My recommendation for this particular film is – watch the trailer. Yes, everyone’s biggest fear is that all the funny parts are in that two-minute, thirty-second compilation – with Hail, Caesar!, not only are the truly only funny parts in it, but the entire story could be told in less time.

Wayne and I attended with six of our seven children. There was nothing inappropriate for a mixed-age group about the film – but there also was nothing in it for them, or for that matter, us. The younger kids were fidgety, looking for snacks, and the older kids were groaning, asking how much longer the film was going to be. And us? We spent as much time as the kids doing all of the above.

This self-indulgent flick about the old-time movie biz was a forum for a lot of great talent and big names to come together and goof off – it seemed like a workshop for a film – try this, try that, see if it works. But that kind of situation is supposed to result in tweaking, paring down, improving upon, etc. Hail, Caesar! had a silly plot which draggggged itself out from the two-and-a-half minutes it could have been into an hour and 46 minutes.

My 16-year-old daughter first showed me the trailer. I thought it looked great. A fun, period-type flick with big stars, highlighting Hollywood in its heyday. Who can beat the likes of Josh Brolin, George Clooney, Alden Ehrenreich, Ralph Fiennes, Scarlett Johansson, Tilda Swinton, Frances McDormand, Channing Tatum, Jonah Hill, and the list goes on…The acting was on par, the costumes were fantastic, and the essence of old Hollywood was captured to a T including homages to many known films. 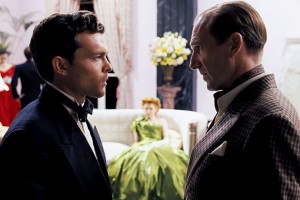 Hail, Caesar! brought to light in grand sardonic fashion, the everybody-knows-everybody’s-business, nearly incestuous nature of the film industry; the scandals (including unwed pregnancy and the red-scare) and cover-ups; as well as the capitalist interests of the Hollywood machine. There were a quite a few laugh-out-loud moments including Hobie Doyle’s (the fantastic – and easy-on-the-eyes according to my daughters – Ehrenreich) attempts at doing line reads with the exacting and exasperated director Laurence Laurentz (the inimitable Fiennes); Johansson (as DeeAnna Moran) who strapped on a “fish ass” and did water ballerina mermaid-diva to perfection while making you feel as if you were transported back to the 1950s; and my favorite scene in the whole film – Channing Tatum’s homosexual-overtoned dance sequence as the frustrated sailor headed out to see with “No Dames.” Yes, that man can move.

But regardless of those funny moments they did not a movie make (in truth, there were a few others, including 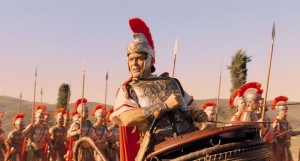 McDormand’s wacky film editing scene and Swinton as battling gossip columnist twins; and lest I forget Hill, who should have been in the movie longer than 6.7 seconds). They punctuated and were somewhat loosely attached to the main story gag of the abduction of Roman/religious epic star Baird Whitlock (a dumbed-down Clooney) and the tired and overworked studio boss, Eddie Mannix (Brolin), who attempts to find him. I found much of the film to be very boring. When I watch a great movie, I’m engrossed from the opening to the ending. When I watch a good movie, I find myself drifting from time to time, maybe noting other elements outside of the story, or picking apart a particular scene. But when a film “takes me out of it” more than I’m into it, I know it’s not, IMO, a well-made piece of cinema.

Hail, Caesar! may have been a masterpiece in the visual sense, but overall it just dawdled the way my kids do when I’m trying to get them out the door for school in the morning. I’m quite certain Hollywood will love it – because not loving it means not loving themselves. For sure, it was not $125 well-spent for this brood. We definitely could have waited for video (and should have done our homework before feeding that much dough into the capitalist machine).