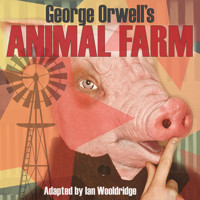 For information and tickets — photos by Ghostlight Photography

It has been a long time since I’ve read George Orwell’s Animal Farm and frankly, I hardly remember it. Seeing TheatreWorks New Milford’s production, directed by Kevin Sosbe and based on Ian Wooldridge’s adaptation, therefore, was like starting from a clean slate (sort of like the farm animals when they toss out their human). For a full disclosure, however, while I’m well aware of the historical and political themes in Animal Farm (communism, dictatorship, etc.), I am anything but a history buff. I’ll save those interpretations and recommend that you to revisit your old high school English Lit notes or do a quick google search for the countless other reviews of Orwell’s work you can read across the net. Instead, what comes to mind for me are the psychological themes including social dominance theory and social roles, coercive power, compliance, obedience, and oppression, among many others. 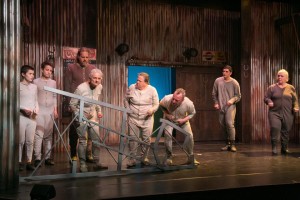 Animal Farm is the disturbing story about the animal denizens of the Manor Farm. One day, a long-in-the-tooth, but well-respected pig by the name of Old Major gives a powerful and influential speech during which he rallies the other animals to rebel against their human owner, Jones, in an effort to reap social justice. When Old Major soon dies, two of the younger pigs, Snowball and Napoleon, move forward with his dream of an animal-run farm and they revolt against Jones. Once Jones is ousted, they propose and purport that this new society of animals shall abide by seven simple (yet bewildering to some) commandments of Animalism, or a new and “complete system of thought.” Initially developed under the guise that it will elevate and unite all of the animals against humans as a collective whole, the unscrupulous pigs ultimately divide the farm as they accrue power and assume special privileges (including hoarding milk and apples). The rest of the animals end up even more oppressed by Napoleon and his shrewd band of pigs then they once were by Jones.

Social dominance theory addresses social stratification (structures) and the hierarchy within groups based on various, sometimes arbitrary traits. In the real world, these may be based upon gender, race, age, economic status, or other characteristics – on the farm, it mainly was the presumed intelligence of the self-important pigs (to be fair, even real-world research identifies the sty-dwellers as “intelligent” and “cognitively complex”). Orwell’s use of such pecking orders at the newly dubbed “Animal Farm” ultimately influenced the assignment of social roles, the allocation of resources, the distribution of work (much of it undesirable), and overall living conditions. We clearly can see the motivations behind what drives some to oppress and for others to suffer oppression, as well as what accounts for the formation of these social groups and how they invidiously discriminate among their members.

The pigs were skillfully portrayed by John Coleman Taylor as Old Major (the delivery of his opening monologue was brilliant); Viv Berger as the corrupt, lying, bullying, Stalin-esque Napoleon who uses coercive power to take over the farm; Sonnie Osborne as Squealer, the cunning, amoral propagandist (loved her three-tiered bra); Alex Echevarria as Snowball, the questionably principled idealist who’s driven from the farm; and Joan Wyner as Minimus, the poet pig who hardly has a mind of his own.

As for the horses, Izzy Watson is a delightful Mollie, lover of material things (most especially pretty ribbons) whose vanity and shallowness trumps her desire to align with her animal comrades and adhere to the seven commandments against humans. Jocelyn Beard is a terrific Clover, strong of mind (albeit at times forgetful) yet weak of will – she cannot oppose the pigs and succumbs to the corruption. Jeff Miller is excellent as loyal Boxer is alternatively strong of body yet weak of mind – he cannot do anything but work himself to death for a cause he does not recognize is going south.

James McGuinness and Lucy McKay as various Young Animals, including a pair of carefully indoctrinated puppies, display their already well-flexed theatre muscles as they slip in and out of each of their numerous roles. Maxwell Diaz is great as the quiet and miserable but seemingly all-knowing Benjamin the donkey, the king of inaction who allows everything to fall apart around him. Terri Gatten delivers many humorous moments as Moses the raven, whose primary desire is to preach of and get to the mythical Sugarcandy Mountain. Adele Burke plays a young animal who also is the story teller – providing elucidation about the irreparable tangle the farm is quickly becoming.

Farmer Jones, adeptly played by Rob Pawlikowski dons a creepy mask – a face over his real face – a kind of blurring of reality, which makes us feel that much more discomfort in his presence. He is the drunken, negligent, and unkind master who gets what’s coming when the animals drive him out. Pawlikowski also is Pilkington, yet another farmer and human whose own selfish interests prevail over what is right. 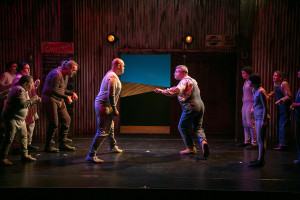 With a simple set design (Kevin Sosbe) and costuming (Elizabeth Kaney, Denise James, and MariBeth Winslow), it is the cautionary tale of corrupt and coercive power itself that stands out. The use of animal postures and vocalizations is done just enough to see the characters as animals but at the same time see their well-layered and differing human qualities. Shout-outs to Regina Sweeney and Sosbe for choreography; Leif Smith for lighting; Kate Moncuse for scenic painting; Jim Hipp for set construction (and John Bloset and Frank Russo for crew); and Steve Larson for lighting and sound.

Whether you see theatre for its artistic qualities, to make comparisons to your own life, and/or see it as historical or social commentary, TheatreWorks’ Animal Farm is an admirably crafted production that puts some real issues on the table. During and after, you’ll be thinking, even scratching your head – which is what great stories and first-rate theatre are supposed to do. We might just ask ourselves, are we really so easily duped, drawn in, and sometimes doomed by others – possibly even by our leaders? Many of us work hard, but does that mean we have power? Can we think for ourselves and if we do, do we have voices that can be heard? Does everyone lie and when they do, are we always able recognize it? Orwell knew then it was a very slippery slope…if nothing else his message may be to take heed and proceed with caution.

I am fond of pigs. Dogs look up to us. Cats look down on us. Pigs treat us as equals. – Winston Churchill

I must confess that although I am a devoted culture vulture, Orwellian allegories of the evils of Stalinism did not interest me in high school. Nor did William Golding’s Lord of the Flies which I consider of the same ilk. So when I heard TheatreWorks New Milford was doing Animal Farm, I was less than enthusiastic. In fact, I was having PTSD flashbacks to the paperback versions of both Animal Farm and 1984 which once sat at the bottom of my high school locker.

All I can say after seeing it, is what a difference 40 years can make! I am pleased to say that I found Kevin Sosbe’s Animal Farm to be an intense, thought-provoking, and most important of all, relevant cautionary tale about the abuse of unchecked power. I am so glad my insatiable thirst for theatre won out over my hazy high school memories (I cannot remember my locker combination either).

The play takes place on a farm where the main characters are all animals. Tired of being oppressed, the animals stage a coup and take over ownership, maintenance, and control of the farm. Farmer Jones is ousted and replaced by a governing counsel comprised of the pigs who have convinced the other animals that they are the best ones to rule. Lo and behold, as is quoted in the director’s notes, “Absolute power corrupts absolutely” and the pigs soon become tyrannical dictators that make Farmer Jones’s regime look like a walk in the park. 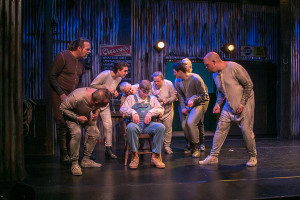 Animal Farm works because of the astute direction of Mr. Sosbe and a very talented cast of actors. Farmer Jones (played enthusiastically by Rob Pawlikowski) wore a creepy Guy Fawkes type of mask which served to dehumanize him, effectively preventing the audience from identifying with him or his species. A neat theatrical conceit for sure, inasmuch as it leaves us to identify with the unmasked animals. Although the actors convincingly portray the mannerisms of animals with snorts, grunts, and body language (indeed I was reminded of the horse actors in Equus) they still looked like us and spoke like us. Of course, this identification ultimately served to underscore the themes of the play. From the inception, we were on the side of the animals; we felt their pain and were indignant about their oppression. (James Cameron accomplished the same identity bifurcation in his mega-budget Avatar where the audience empathized completely with the avatars and rooted against the humans.) 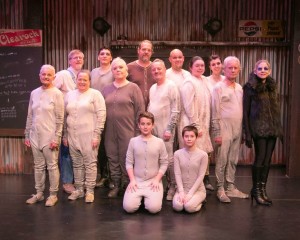 The cast, which ranged from youngsters to oldsters (I’m an oldster so I can say that with impunity), was terrific. John Coleman Taylor, as the senior pig Old Major gave such an impassioned and rousing speech inciting the eventual coup that I would have voted for him in the last election over the other two candidates. Viv Berger, aptly named Napoleon, was spot-on as the rebel leader who wallowed in the mud to excess. The remaining pigs, Squealer (Sonnie Osborne), Snowball (Alex Echevarria), and Minimus (Joan Wyner) were excellent complements to Napoleon’s rise to gluttony. The downtrodden Horses (with their hoof stomps, headshakes, and neighing) were convincingly played by Izzy Watson (Mollie), Jocelyn Beard (Clover), and Jeff Miller (Boxer); Maxwell Diaz played Benjamin, a donkey. Like all good imposters (not imitators – there’s a difference) the actors were able to conjure the illusion of being bedraggled nags without prancing around on all fours. James McGuinness and Lucy McKay as the Young Animals, the real victims of the legacy handed down to them by their forebears. Terri Gatten as Moses, the raven, provided some welcomed comic relief to the play’s overall dramatic intensity. Last, but not least, Adele Burke as the Story Teller provided the necessary exposition.

While TheatreWorks’ Animal Farm is a play for all audiences, I wish that every high school student would see it. If I had seen the play in high school, I would have had a completely different perspective on Animal Farm over the last four decades. Indeed, as many readers noted on the popular book site Goodreads, Ian Wooldrige’s adaptation of George Orwell’s Animal Farm is as good as the book or even better.