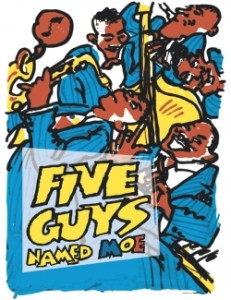 I’m a sometime-y fan of jukebox musicals – that is when dynamic, toe-tapping songs have been neatly molded around a well-written narrative. It really doesn’t matter if I know most of the tunes (as in Mamma Mia) or if I know nearly none; it’s their congruency and complementarity to the story which counts the most for me. In Westchester Broadway Theatre’s (WBT) newest and 216th production, Five Guys Named Moe, a show about which I had no prior knowledge or experience, I was surprised and thrilled to find that this is one that has all of the above and then some. Not only are the music and the yarn almost magical, it’s like a party that erupts in the proverbial house – it’s FUN with capitals F-U-N!

Written by Clarke Peters and featuring myriad works from the “King of the Jukebox,” American musician and songwriter Louis Jordan, over 20 of Jordan’s songs create a seamless and palpably warm embrace around protagonist, Nomax, a recently-dumped sad sack who has no idea how to get his life back on track and who has no better coping skills than to drink away his sorrows. But while many of us may recognize that alcohol isn’t a great cure for the blues (pun intended?), uplifting and exuberant jazz may be! In Nomax’s drunken 5:00 a.m. haze, like a handful of genies from a bottle, five guys named Moe suddenly bound from his radio and into his house on a mission to help him win back his lovely Lorraine. 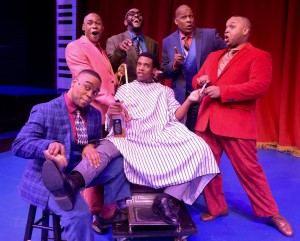 But who the heck are five guys named Moe, one might ask? And it’s a fair question, one best answered with your own eyes and ears at WBT over a fab meal of prime rib and a great glass of red wine – but alas, you’re reading my review, so you must want to know. We’ve got talent for days here – No Moe (Tyler Johnson-Campion) is smooth as silk; Little Moe (Isaiah Reynolds), is well, height-challenged but with energy for days; Four-Eyed Moe (Douglas Lyons) is the bespectacled front man; Eat Moe (Quentin Avery Brown) is food-obsessed and never without some sort of grub in his hand or mouth; and finally Big Moe (Tony Perry) is, you guessed it, big as well as warm and brotherly. At first Nomax (Napoleon M. Douglas) is overwhelmed, and who wouldn’t be? But before long his gloomy skies turn altogether sunny.

Did I say this is FUN? It’s like a non-stop, playful joyride down musical memory lane that if it weren’t for WBT’s house rules about moving in the aisles, you’d be on your feet in an instant. I should clarify those rules are there for very good reason – the principals get to mix and mingle allowing the fortunate spectators to feel every bit a part of the action.

The Moes and the non-Moe, Nomax, are a collective mélange of pizzazz, personality, and playfulness. Their enthusiasm radiates from the stage, with nary a lull in the entire two hours of the production. So well executed are their individual character quirks, one would think this talented bunch was born to play each respective role.

Under the exceptional direction and choreography of Richard Stafford, with Kristyn Pope as Assistant Choreographer/Dance Captain/Assistant Stage Manager, and with musical direction by John Daniels, Five Guys Named Moe adds brightness to this long and weary winter. And a production like this doesn’t work without the musical accompaniment and the band themselves, who are right where they belong – on stage with the rest of the talent. Daniels is also on piano; Steve Bleifuss on trombone; Jim Briggs on clarinet and sax; Dave Dunaway on bass; Jay Mack on percussion; Brian Uhl on trumpet; with Von Ann Stutler as Musical Contractor.

If five guys named Moe are able to turn Nomax’s cemented frown upside down with their bouncy and boundless spirits, no matter what your mood, they’re sure to put an even bigger smile on your face. Don’t miss it!

Westchester Broadway Theatre has a wonderful tour de force on its hands with its newest production, Five Guys Named Moe. It’s a relatively little-known musical to most of the general theatre-going public despite its having premiered on Broadway in 1992 and having won the Laurence Olivier Award for Best Entertainment. The book was written by Clarke Peters as an homage to the incredible music of Louis Jordan. Masterfully directed and choreographed by Richard Stafford, the musical engages, entertains, and enchants. 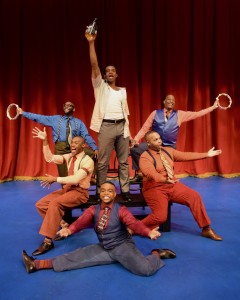 The main character, No Max (Napoleon M. Douglas), is adrift in a sea of alcohol and blues music after his girlfriend has left him. Fortunately, whether by divine intervention or divine delusion, five guys named Moe magically appear to guide him via the music of Louis Jordan. The “Moes” include Eat Moe (Quentin Avery Brown); No Moe (Tyler Johnson-Campion); Four-Eyed Moe (Douglas Lyons); Big Moe (Tony Perry); and Little Moe (Isaiah Reynolds). Each Moe has his own unique personality which you can surmise from their character monikers. The thing that the entire cast has in common, however, are that they are all incredible triple threats and exude the energy of 100 Energizer Bunnies. The pacing and choreography are fast and furious and there is not a moment during either act that the play skips a beat or falls out of sync.

Even if you are unfamiliar with the music of Louis Jordan, you will not be able to miss the incredible beat and verve that serves as an almost seamless segue to the beginnings of early rock and roll. Special kudos have to be given to The Band which is on stage throughout the play and includes: Musical Director/Piano – John Daniels; Trombone – Steve Bleifuss; Clarinet, Sax – Jim Briggs; Bass – Dave Dunaway; Percussion – Jay Mack; Trumpet – Brian Uhl; and Musical Contractor – Von Ann Stutler.

Some of the best moments of the play occur when the actors break the fourth wall. Audience interaction (from your seats) is highly encouraged!