Someday Productions LLC and Pillow Talking are pleased to present the following review of FIRELIES, a World Premiere at Long Wharf Theatre 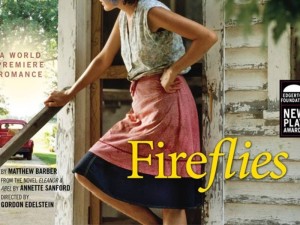 There is a fountain of youth: it is your mind, your talents, the creativity you bring to your life and the lives of people you love. When you learn to tap this source, you will truly have defeated age.  –Sophia Loren
Love and belonging are among the most basic human needs – pioneering humanistic psychologist Abraham Maslow theorized that the happiest and healthiest of us have satisfying relationships with others where one can both give and receive love. Be it romantic love, friendships, or the love among family, the drive we feel to foster such close connections helps us to grow and thrive; and it enriches us, giving our lives meaning and value. Without meeting these needs, one often feels an inner sense of loss, emptiness, and lack of personal fulfillment.

Suffice it to say, love therefore is a human universal. Such is the crux of the new play Fireflies by Matthew Barber, which is enjoying its world premiere at the inimitable Long Wharf Theatre under the direction of its Artistic Director, Gordon Edelstein. Based on the novel Eleanor & Abel by Annette Sanford, this marvelously simple but captivating tale about a blossoming love between a mature couple, like the bioluminescence of the firefly itself, will illuminate your very soul.

Eleanor Bannister is a retired schoolteacher who’d left her mark on nearly all the children (many of whom now are adults) in the small town of Groverdell (pop. 1,472) in Jackson County, Texas. Currently something of a recluse, her spark has all but gone out. What once provided her with an inner light has been replaced by darkness – that of a surrender to aging and self-imposed solitude where she has withdrawn from most all human connection.

But if her relentlessly pesky neighbor, Grace Bodell, has anything to say about it (and she has a lot to say), Eleanor’s lingering flicker will not be extinguished. With her incessant chatter, continuous snooping, and boundless energy, Grace shows up regularly and often without notice, to pry into Eleanor’s life, gossip about the neighbors, and frankly, wear her out. It’s not until the odd drifter, Abel Brown, meanders into Eleanor’s life, however, that her spark is reignited; her inner glow again emitting a light clearly visible to others around her.

Just who is Abel Brown? And why is he capable of breathing new life into the now shorter days and longer nights of Eleanor’s autumn years? While the mysterious wanderer may have secrets, his presence is precisely what Eleanor needs and his timing couldn’t be better. It is on the hottest days of the season that one can expect to see the firefly – and in steamy July when the play takes place, Eleanor, like the muggy bug, is alit with joy in Abel’s very presence. 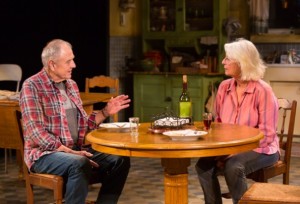 When Lin-Manuel Miranda accepted his Best Score Tony for Hamilton, in a beautiful shout-out to his wife, son, and in remembrance of the Orlando tragedy, he said “…love is love…” People may love who they choose. Love transcends all boundaries, barriers or judgment. For Eleanor and Abel, it transcends age and station in life. For them it is chemistry alone that is at the root of love’s sustainability. Watching Fireflies is like being a (fire)fly on the wall – seeing into the intimate exchanges of the characters and rooting for them all the while. 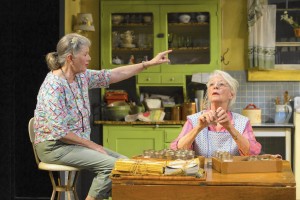 Edelstein scored a true grand slam with four incredible players on the New Haven boards. The extraordinary Tony and Obie Award-winning (and four-time Oscar nominee) Jane Alexander, gives many layers to the vulnerable yet tough and well-worn Eleanor. She is at one moment hopeless and the next, hopeful. She is alternately hard and soft. She is impenetrable and entirely exposed. Her exchanges with multi-award-winning Judith Ivey as Grace are often knock-down, drag-out hysterical. Alexander is the straight-woman to Ivey’s loose cannon as Ivey effortlessly milks the audience for one laugh after another. Grace is well-meaning, but maddening beyond belief – and still altogether delightfully endearing. She embraces life and won’t let go. Denis Arndt, no stranger to stage or screen, is the cagey traveler Abel who steals Eleanor’s heart like a thief in the night (and that’s not all he pilfers, but no spoilers). Christopher Michael McFarland as the bumbling sheriff, Eugene Claymire, and one of Eleanor’s former students, is no second-fiddle to the former triumvirate. He not only provides some of the plays essential comic elements, but also some truly poignant moments which aid in bring Eleanor’s sense of purpose back on track.

Barber’s story touches you and like life itself, meshes love, laughter, sadness, and frustration. It matters not that our protagonists have more than a few grays, for love truly is love and this tale could be scripted about almost any characters. Edelstein provided the essential guiding hand to these theatre vets in their easy, graceful playhouse dance. Shout-outs to Alexander Dodge for a spectacular set design which provided the perfect backdrop (and impactful second act alteration) to the narrative, as did Jess Goldstein’s costume design, Philip Rosenberg’s lighting design, and John Gromada’s sound design.

An exceptionally heart-warming night of theatre, Fireflies isn’t to be missed.

The Lampyridae are a family of insects in the beetle order Coleoptera. They are winged beetles, commonly called fireflies or lightning bugs for their conspicuous use of bioluminescence during twilight to attract mates or prey. – Wikipedia

If we apply the words of Mark Twain to the world premiere of Fireflies at the Long Warf Theatre, then we must acknowledge that the play contains a plethora of “right” words and they also include, coincidentally, “lightning bugs.” Billed as a romance (and reminiscent of The Bridges of Madison County), the story centers on Eleanor Bannister, a retired school teacher who literally taught the entire population of 1,472 of Groverdell, Texas where the setting of the play takes place. Although she lives alone in a house her father had built decades ago (the play takes place in 1995), she is often frequented by her friend and neighbor, Grace Bodell. It seems that Grace is the “town crier” and is wont to share every tidbit and shred of gossip with Eleanor, much to her chagrin.

Groverdale, like many small towns, is a rumor mill where everyone knows (or thinks they do) what skeletons there are and whose closets they are in. So when a drifter – Abel Brown — comes to town and starts “hitting” on the single women, it becomes great fodder for the town’s gossip mongers, especially Grace. Needless to say, it’s just a matter of time before Eleanor and Abel cross paths and, as one would expect, sparks start to fly.

The play, written by Matthew Barber, is based on the novel, Eleanor & Abel by Annette Sanford, and helmed by veteran director Gordon Edelstein. The story is completely forseeable, the romance between Eleanor and Abel (I’m not giving anything away, trust me) entirely predictable, as are the stereotypical generalizations of living in a small town. In essence, Fireflies can be analogized to a Nicholas Sparks tale without a bummer of an ending.

So what is special about the play? Why would people enjoy it? Why did I enjoy it? 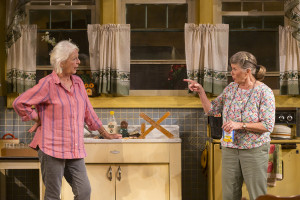 First, the cast of characters is somewhat unique in that three out of the four principals are all AARP subscribers (trying to remain politically correct when discussing our older population). It was both inspiring and refreshing to see romance bloom between seniors, giving us all hope that love is eternal – and to quote Mark Twain again – “age is an issue of mind over matter. If you don’t mind, it doesn’t matter.” Symbolism runs heavy as the theme of love springs eternal is not only embodied in the play’s title, but both Abel and Eleanor talk about fireflies and why they light up – to attract a mate. It becomes a bit much when Eleanor talks about how Abel has revived (or maybe resurrected) a “light” within her. (Okay, already, we get the firefly metaphor.)

The dialogue is sharp, witty, and clever. Verbal fencing among all of the characters abounds. Sprinkled with the generous supply of humorous quips and staccato repartee are solid gems of advice and wisdom that can only come from people who have experienced the bittersweet bumps of life. 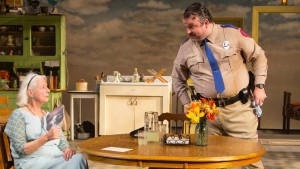 Finally, as a theatre goer, how can you not LOVE the performances of four consummate actors: to wit, Jane Alexander (Eleanor Bannister), Judith Ivey (Grace Bodell), Dennis Arndt (Abel Brown), and Christopher Michael McFarland (Eugene Claymire). Jane Alexander gives a stellar performance as the shy, conservative, retired school teacher bordering on spinsterhood. Judith Ivey is knock-down-drag-out wonderful as Grace Bodell, the nosy neighbor and spy next door. While Ms. Ivey may have channeled some aspects of Gladys Kravitz from the old Bewitched TV show, her characterization and portrayal are completely genuine and authentic. Veteran stage and screen actor Dennis Arndt gives a nicely nuanced performance as the drifter/suitor Abel Brown. His portrayal is so self-effacingly crafted that you just want to take him home with you and it’s easy to see why Eleanor would fall for him. Last, but not least, is Christopher Michael McFarland who steals a few scenes as the Barney Fife-like bumbling peace officer of the town.

Fireflies will certainly spark (or maybe reignite) your romantic predilections and (like ET) give you a heart light.