I’ve made this pronouncement numerous times both verbally and in writing – I love farces. What really lights my fire is that they are so, well, funny. Absurd really. Entirely improbable. Downright ludicrous. And what’s more, the characters don’t even know it. We get to watch them ever-so-seriously bumble about, enter and exit through slamming doors (a classic farcical element), and exaggeratedly complicate their own fine mess. Farces are about people doing ridiculous things while believing they are doing otherwise. And like in life, one finds humor in even the darkest of circumstances.

Farces as a genre are not easy to do; however, and this is something I’ve learned both from seeing them and speaking with many in the business including one master of farce, actor Paxton Whitehead. In our Pillow Talking interview with him he said, “You either have a knack for it or you don’t. I think it is hard for some people. I found it not so difficult…I just seemed to respond to it.” We would agree, having had the good fortune to see Mr. Whitehead brilliantly tackle the task.

When I heard that the Town Players of Newtown were mounting Fred Carmichael’s 1961 Exit the Body, I couldn’t have been more pleased. How are these for some interesting plot points? A mystery writer stumbles upon a dead body in a closet – then another; she later crosses paths with jewel thieves; pretends someone else’s husband is her own; and does a late-night recitation of Poe’s The Raven. There’s that and more, setting up some madcap monkey business and multiple misunderstandings – ultimately culminating in lapses in both judgment and logic. 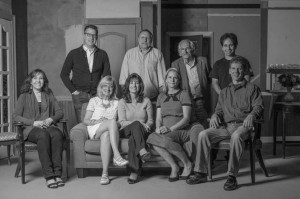 Attractive and charismatic Crane Hammond (a wonderful Deborah Burke whom we recently saw in Rumors at Ridgefield Theatre Barn) is taking some time off from her successful writing career with her caustic secretary Kate Bixley (a sidesplittingly funny Kimbery Marcus) at her side at a New England cottage she’s rented. Kate’s the unfiltered type – she lets it be known that she’s not exactly happy about all the rolling bucolic green or the quiet that abounds – rather it’s the noise of the city that floats her boat. But that doesn’t stop Crane who is looking forward to some well-needed R&R and who’s relishing an escape from her fictional whodunit world. If only it were that simple – in true, grand farcical fashion it’s not long before doors open and close and Crane gets a glimpse of what’s behind the illustrious door number one – the closet door that is, which is accessible on one side into the living room and on the other, the library. There’s a body hanging in there…and then…it’s gone in a flash! Just who was that corpse?

One by one we met the eccentric collection of locals: jack-of-all-trades Vernon Cookley deftly played by a masterful Ron Malyszka; he’s the town sheriff, dog catcher, and taxi driver, among other vocations. Jenny, an endearing Brooke Cassalia is the country bumpkin and crummy instant coffee-making, incompetent housekeeper; and her beau Randolph (a hysterical Jeffry Bukowski), the slick petty crook and mama’s boy. Helen O’Toole, a delightful Barbara Disraeli is the nosy parker Realtor who never stops chattering and long overstays her welcome. Crane’s best friend is fashion designer Lillian Seymour (a delightful Kathleen Kryspin) who has secretly married the red ascot-wearing Lyle Rogers played to the hilt by Timothy Huber. Finally we meet amnesiac Philip Smith (Shawn Brown), who’s got an egg on his head and can’t remember what the heck happened or why he’s there. And then there’s the most unexpected of visitors – Crane’s husband Richard (Mark Rubino) who helps assemble the final puzzle pieces.

Shout outs to Timothy Huebenthal for a wonderful set design and the many hands that went into its construction and painting and the properties; the multi-talented Nick Kaye who for this production led lighting and sound design, as well as Billy Haase and Matthew Kryspin for its execution. Kudos to Burke for costumes and the entire rest of the crew for all of their hard work. It really does take a village to mount community theatre.

Director Gene Golaszewski did a fine job leading the production; but like Whitehead said, farce is tough. This troupe did a commendable job despite some pacing issues. Carmichael’s twists and turns will keep you guessing right until the delivery of the very last line. We always enjoy the unique selections presented by the Newtown Players and look very forward to our next trip out – but if you’re up for this one, catch it before its final exit!

Farce is tragedy played at a thousand revolutions per minute. – John Mortimer

Comedy is tough. It’s also subjective. One person’s belly laugh may be another’s grimace. It’s tough to sustain as well for any length of time. Groundhog Day, Airplane, and Animal House are all classic exceptions. Farce is a genre onto its own, where colorful characters and off-kilter predicaments and situations become comical. Typical farcical elements include rapid exits and entrances, slamming doors, mistaken identities, and near sexual misses just to name a few. When it works, it’s great. When it doesn’t – well, it doesn’t. 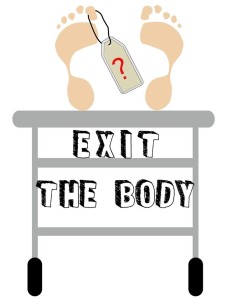 Fortunately for the Town Players of Newtown, its farce, Exit the Body, works more times than it misses. The Players should be congratulated as well for attempting to tackle this complex farce by Fred Carmichael and bringing this rarely performed play to the community. There are some rough spots, however. The first is the structure of the play itself (which is not the fault of the Town Players). A three-act play with an intermission after the second act is simply too long for today’s audiences whose attention spans have been steadily whittled down over the years, rendering virtually extinct the double-header matinee, any movie over two hours (unless it is directed by the likes of a Spielberg or a Lucas), sixty-second commercials and, sadly, the three-act play. Many producers today seeking the rights to put on a three-act play request permission to condense it into two acts to satisfy modern abbreviated palates. (Curiously, binge watching TV shows is a rising phenomenon). The other problem with a farce like Exit the Body is that much of the dialogue is dated and must somehow be transformed into quick-witted repartee that remain relevant to today.

Those issues aside, Exit the Body is a funny and engaging theatrical piece. The play is solidly acted by a talented cast and staged by an experienced director (Gene Golaszewski). The plot centers around famed mystery novelist, Crane Hammond, who when seeking some needed R&R in a rented country home in New England, gets more than she bargained for with a real-life mystery involving stolen diamonds, bodies appearing and disappearing, mistaken identities and, of course, lots of slamming doors.

Ron Malyszka is knock-down-drag-out hilarious as Vernon Cookley who, like a character out of an old I Love Lucy episode, is everything from the local cabbie and dog catcher to the town sheriff (his character has more jobs than John Cleese has roles in Monty Python and the Holy Grail). He brings just the right mix of the bumbling ineptitude of a Barney Fife and the charming charisma of a Columbo. Deborah Burke as Crane Hammond (what a great genderless name for an author) channels a definite Jacqueline Suzanne (maybe even a Nora Roberts) persona as the famed mystery writer. Likewise, Kimberly Marcus as Kate Bixley, Hammond’s personal assistant and gatekeeper channels the perfect Eva Gabor-urbanite-can’t-live-without-Times-Square-crowd-noises who is thoroughly a fish out of water in the green acres of the New England countryside. There were two pairs of duos that had nice chemistry together. The first was the gangster Randolph (Jeffry Bukowski) and his wanna be moll Jenny (Brooke Cassalia). Without giving away any spoilers, I especially liked the arc of Jenny’s character by the end of the play. The other interesting duo was the next door neighbor couple Lilian Seymour (Kathleen Kryspin) and her beau Lyle Rogers played with just the right amount of smarmy charm by Timothy Huber. Rounding out the ensemble cast was the dazed and confused Philip Smith (Shawn Brown), the ditzy real estate agent Helen O’Toole (Barbara Disraeli) and Crane’s husband, Richard Hammond (Mark Rubino).

Nice set design by Timothy Huebenthal and lighting and sound design by the multi-talented Nick Kaye.

Fred Carmichael’s play harkens back to the style of comedy found in old movies now relegated to broken up clips on YouTube. I was particularly reminded of the Abbott and Costello’s Hold that Ghost and Elvis Presley’s Tickle Me which both involved mistaken identities, stolen money, gangsters and other farcical elements. Exit the Body is definitely worth the trip back through time to the vintage comedy of yesteryear.