Pillow Talking’s Review of EVERYTHING HAPPENS FOR A REASON

Someday Productions LLC and Pillow Talking are pleased to present the following review of EVERYTHING HAPPENS FOR A REASON: Finding the True Meaning of the Events in Our Lives by Mira Kirshenbaum 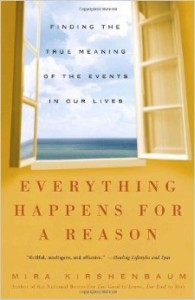 Everything Happens For A Reason by Wayne J. Keeley

http://Everything Happens for a Reason: Finding the True Meaning of the Events in Our Lives

You may encounter many defeats, but you must not be defeated. In fact, it may be necessary to encounter the defeats, so you can know who you are, what you can rise from, how you can still come out of it. ― Maya Angelou

My wife and step-children gave me this book for Christmas because I always say, “Everything happens for a reason.” My mother and father both used to say the same thing, but of course, I didn’t believe them. In fact, when I went to college I was a huge existentialist. It wasn’t until many years later, after I had graduated law school and was at the funeral of an uncle; I was sitting next to my mother. My mother’s cousin was looking at both of us for a long time and finally said, “Hey, Lucy. Look at your son next to you. Did you ever think things would work out like they have?” It took me a while to figure out what she meant, but when I did, it was like a light bulb going off over my head. And from that point forward, my tough existential mantle began to deteriorate until it finally crumbled.

So it was with great anticipation that I read Ms. Kirshenbaum’s book Everything Happens for a Reason: Finding the True Meaning of the Events in Our Lives. She is not only a best-selling author, but a practicing psychotherapist. Her theory – that life is a “cosmic kindergarten” – that a silver lining can be found in the darkest cloud, and the fact that each life-changing event is a teaching moment, is based upon her own experience as the child of Holocaust survivors and from client case studies from her professional practice. According to the author’s thesis, there are ten principal reasons why people experience hardship in their lives; they are: 1) to help you feel at home in the world; 2) to help you totally accept yourself; 3) to show you that you can let go of fear; 4) to bring you to the place where you can feel forgiveness; 5) to help you uncover your true hidden talent; 6) to give you what you need to find true love; 7) to help you become stronger; 8) to help you discover the play in life; 9) to show you how to live with a sense of mission; and 10) to help you become a truly good person.

The author devotes a chapter to each reason. Like a scientist, she lays the foundational proposition up front and then dissects and analyzes the elements, backing up her suppositions with stories of real people or her own life experiences. Obviously, the approach is very clinical in nature which is somewhat of a nice departure from other books on the subject. Most books on the topic fall somewhere between pseudo-science and the occult. There is a self-diagnostic test supplied in each chapter which invites readers to diagnose whether or not they fit into that particular category. A caveat expressed by the author, however, notes that the diagnostic tests (like the diagnoses) are not engraved in stone and there may be multiple overlaps in categories.

While a scientific approach is certainly welcomed over the mystical, occultish, leave-it-in-the-hands-of-God approach, it is, in my opinion, a bit too restrictive. While the basis of the book’s thesis falls short of Jungian synchronicity (and an in-depth foray into quantum physics), from a pedagogical standpoint, it is too didactic at times. Indeed, while I’ll buy that bad things happen for a reason, I do not agree that we always can ascertain, diagnose, categorize, and somehow apply the lesson to be learned in our daily lives. Sometimes, the answers just do not fall into neat categories. Nor do they always materialize in our lifetimes – at least that’s my own theory.

Nevertheless, Everything Happens for a Reason is a satisfying, though provoking read.

To circle back to my opening story – that is, the time I had my epiphany and became a convert and believer in that everything happens for a reason. I’d wondered why my mother’s cousin asked her that question at my Uncle’s funeral, if she ever would have imagined that things could work out the way they did. I put the puzzle together shortly thereafter. You see, my mother’s first husband committed suicide. She met and married my dad (who had lost his wife to cancer) many years later and then became pregnant. The fetus, however, was strangled to death by its umbilical cord about six months into the pregnancy. Back then, it was necessary for my mother to carry the dead baby to term. She still possessed the resiliency to try again and later became pregnant with me. So my very existence, as well as my children’s, is borne from a series of devastating, life-altering circumstances. If those terrible, earth shattering things had not happened to my mother and father, I would not be here and this review would never have been written.