Someday Productions LLC and Pillow Talking are pleased to present the following review of  DON’T BREATHE by I.M. Nosferatu 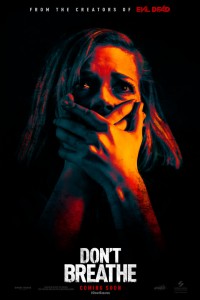 Despite the title, you can breathe – I saw Don’t Breathe and I’m telling you that you can take a deep breath. Don’t get me wrong, it didn’t suck. In fact, it was quite good as a genre piece. I’d even say that the set up and first forty-five minutes were Ripper smooth and reached a level just below Krugerian in nature. Indeed, the basic plot was somewhat unique and obviously a primary factor in leading to an 85% audience score on “Rotten Tomatoes.”

It’s the old Robin Hood story with a couple of Hitch twists. Three delinquents break into houses and steal valuables from the rich to sell to their slimy fence. The fence comes up with an easy mark for the post-pubescent robber-barons. It seems a former veteran’s daughter was killed in a car accident and the veteran received a million dollar settlement. Why anyone would think that the vet would keep the money in his house stretches credibility? But okay, I’ll bite. Oh, I forgot to mention, the vet is blind and lives in a hovel with a dog that could have played Cujo.  So the deed goes down and our Robin Hoods manage to break into the house, quell Cujo, and sedate the blind man – or do they? That is the million dollar question. The tables quickly turn and like the film Extremities, the questions of who is captor and who is prey become muddy at best. 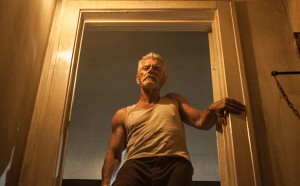 One of the main reasons why this film succeeds is the sick acting. Veteran character actor Stephen Lang, who has a resume longer than the river Styx, rises to the level of Jasonian in terms of his acting. He came to prominence for most mortals as Colonel Miles Quaritch in Avatar (he also was the voice of the same character in the video game). But I remember his stunningly ill performance as Ike Clanton in 1993’s Tombstone about Wyatt Earp (the one with Kurt Russell, not Kevin Costner). Jane Levy is devilishly good as Rocky, the female bandito of the group with a heart of gold (she wants the money so she can save her young sister from her demented mother). Seriously sick performances also are turned in by Dylan Minnette as Alex (from Goosebumps) and Daniel Zovatto as Money (from Fear the Walking Dead).  Special fang bites (real ones in this case) go to the Dog who apparently was played by three different canines – Astor, Athos & Nomad.

The film was penned by Fede Alvarez and Rodo Sayagues and more than capably directed by Mr. Alvarez. No stranger to the horror genre, Mr. Alvarez has amassed such horror credits as the 2013 Evil Dead and the 2009 Panic Attack. He knows how to give good scare.

As I said, the set-up was Ripper smooth. After forty-five minutes, however, the film falls into general horror formulaic patterns (which isn’t a bad thing for genre fans). I should note that there is one part that jumps the shark so badly that even Darth Vader (Lord of shark jumping) would cringe under his oxygen mask. But overall, the story moves briskly to its predictable but satisfying ending. Wish I could say more, but spoilers aren’t my thing. 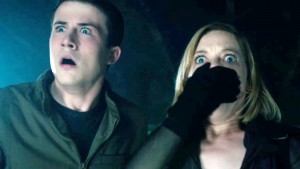 The boffo box office and almost unanimous acceptance by both audiences and critics alike has to be due to the slick marketing scheme offered by the marketing wizards. There’s no doubt that Don’t Breathe is a sick horror film worthy of multiple fangs-for-the-memories – but 85% on the tomato meter? Most horror films don’t break 50%. And that’s because from the looks and plot summary it appears – at least on the surface – that it’s a psychological suspense thriller as opposed to purely a horror offering. So it’s a fake left go right, or to use an advertising analogy, a bait and switch. Muggles are attracted to the film thinking it’s more of a mainstream piece and then get sucked into the horror genre vortex. Probably most of these types are so virginal that they don’t even realize they are watching standard horror fare.

At any rate, I deem it a horrifically well-made film worthy of viewing by both genre  fans and the uninitiated. I give it my I.M. Nosferatu Medal of Honor.  From its reception, I am certain that more breath will be pumped into Don’t Breathe sequels.