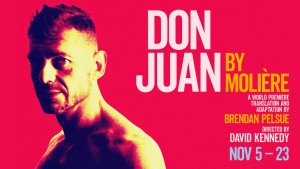 I cannot remember the first time I ever heard of the character named Don Juan. Like Elvis Presley and Enzio Pinza, Svengali, Frank Sinatra,  and the production South Pacific, I was either born with their presences in some Jungian collective consciousness or absorbed them through osmosis via the background chatter of my parents’ relatives. I recall hearing something along the lines of: “Did you hear about Joey? He’s dating three women at the same time – what a Don Juan,” said by my Aunt Annie about my cousin. It was not until years or maybe decades later that I realized Don Juan was a legendary figure, the subject of many pieces of literary art including a five-act play by the French playwright Molière. To me, Don Juan was always some mystical figure, much like Lucifer in Genesis, who appeared as a personified snake and could seduce the fig leaves off both men and women.

So, it was with great interest that I came to see Westport’s version of Don Juan by Molière, a world premiere based on the translation and adaptation by Brendan Pelsue and directed by theatre veteran David Kennedy. The poster and play program feature a bare-chested male figure who’d likely be more appropriate in an advertisement for a Rocky sequel than a play about the famous manipulator and seducer of men and women. (The aforementioned individual has nothing to do with the play.)

I am agnostic with respect to how far one should go with tampering (or monkeying) with classics. I have seen countless versions of Shakespeare; modern incarnations where men wear Brooks Brothers suits and classic ones where wigs and costumes predominate. I have loved, liked, and even detested these versions on an ad hoc basis. With respect to Westport’s version, I thought it was an engaging, hilarious play with some semblance to the five-act original Molière play. (Molière is probably spinning in his grave, but that is another story.)

The question that remains, however, is how far over the top did Brendan Pelsue and David Kennedy mean to go? Obviously, anyone can take a public domain work and do whatever he or she wants with it – look at Pride and Prejudice and Zombies. But how far can you get from an original and still call it a property based on a classic piece?  For example, what would Molière have thought when one of his characters breaks into song – “Proud Mary” – or at the end of the play when we hear Nat King Cole singing “Unforgettable.” Indeed, Pelsue, the translator and adaptor, links his work to the cartoon character of Scooby-Doo in his notes.

For these reasons, I cannot judge, review, nor criticize this play as one originally written by Molière. But I can review it based on its stand-alone value as a piece of theater. Judging it on this basis, I found it to be an excellent current social and political satire, replete with pop culture references that would make the creators of Scooby-Doo, South Park, and even Family Guy very pleased. The toilet scene – the blatant image of which I am still trying to dislodge from my tangled neural synapses – may be worth the price of a ticket alone.

While I felt that Nick Westrate did a great job and delivered a commanding performance, I found the character of Don Juan in this version to be a complete reprobate rather than a Svengali-like seducer and, like the definition of obscenity, had no redeeming qualities whatsoever. To a great extent, I found the character to be a one-note with no arc or development. If truth be told, I find Don Corleone to be more charismatic than this personification of Don Juan. Bhavesh Patel, on the other hand, who played Don Juan’s servant/valet, is a breath of fresh air in addition to a scene stealer. He has great comic timing. If this version of Don Juan is about a person’s moral core, then it is really Sganarelle’s story as we see him vacillate between what is morally and ethically just and unjust, right and wrong, and all shades of gray in between.

In sum, Westport’s Don Juan is an excellent piece of satirical and humorous theatre with vivid (if not all likeable) characters. The pop culture references add to its vitality as a modern and relatable play. At least in terms of a story line and certain plot elements, it does resemble – to a degree – Molière’s five-act play although how much further I would go with that connection is another matter. One thing’s for sure, I would have created a different poster/playbill. As one’s first impression of what’s in store, and in light of the fact it has absolutely nothing to do with any aspect of the play, it alludes to something entirely different than what you’ll find on Westport’s stage.