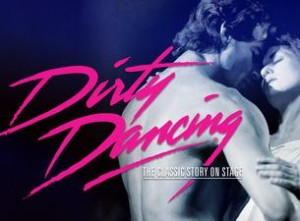 Dirty Dancing and I have somewhat of a history together. In the mid-1980s, when I stepped away from the practice of law to produce, write and direct films and videos, we rejected a young actor for a project who, at the time, had only appeared in a mini-series called North And South and was virtually unknown. Instead, we opted for a more established TV actor thinking that would provide more exposure for the project. The actor we rejected was none other than Patrick Swayze who went on in 1987 to do a low budget (4 to 6 million) film called Dirty Dancing which would garner him worldwide recognition.  Wait, it gets better. To add insult to injury, one of our biggest competitors in the direct-to-video market was Vestron video and guess what its first major theatrical release was – Dirty Dancing. 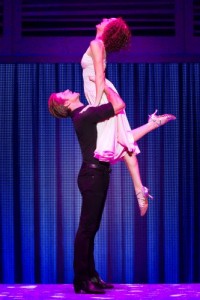 It seems that the specter of Dirty Dancing is now haunting me in the theatre world of which I have been involved. I had the opportunity to see the national touring company’s production of Dirty Dancing at the Bushnell in Hartford. Despite my bumpy past with the film, I loved it and have seen it many times since then. I thought it was a great coming of age story and musical that would bring young people back into movie theaters to watch musicals on the big screen – which it did in droves. I was somewhat skeptical of a theatrical version. It is harder to take a film and make it a play rather than the converse because of the inherent limitations of live theatre (N.B.  Ghost and Rocky, although Stephen King’s theatrical adaptations of Carrie and Misery fared somewhat better.)

I am pleased to report that the national tour’s production of Dirty Dancing was as good as, if not better, than the film! A crowd pleaser for all ages. Indeed, it should not be compared with the film, but can stand on its own as great, musical theatre. The play, written by Eleanor Bergstein and directed by James Powell, was visually and aurally a sumptuous feast! How can you go wrong with a fabulous cast, brilliant directing, staging and choreography and iconic music like This magic Moment, In The Still of the Night, and Time of My Life just to name a few? 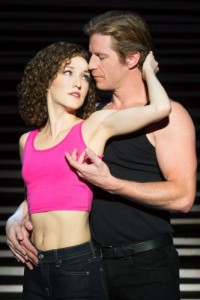 For those who have been in a catatonic state since 1987 when the film was released, the story details a summer vacation in the life of Frances “Baby” Houseman, the favored daughter of an upper middleclass doctor and his wife. It is the summer of 1963 when, as Tom Brokaw coined it, the “Greatest Generation” reigned in its prime. It was before the world lost its innocence; before the assassinations of JFK, RFK and Martin Luther King; before the turbulent mid to late 60s; before Vietnam. Baby was raised with the notion that everyone is equal and you have to push and keep pushing for what you believe in. Determined to join the Peace Corps after she graduates, she involves herself in the lives and troubles of the workers at the resort where she is vacationing with her family. In the process, her belief system and principles are tested and she must make some impactful decisions. It is not only her coming of age story, but the world’s as well, being on the brink of major political and social changes. In several respects, the play even goes further than the movie in highlighting the period by having explicit references to civil rights and equality, including the musical numbers This Land Is your Land and We Shall Overcome. 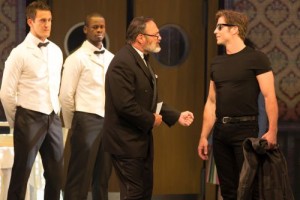 The cast was simply superb. While certain characters physically resembled some of the actors in the film, each cast member made the role his or her own. Christopher Tierney as Johnny Castle was beyond cool in his shades and leather jacket. Christopher has the total package: good looking, nice abs, commanding stage presence, great acting chops and wow, can he dance. Rachel Boone as Baby was far from a Jennifer Grey clone and brought real passion, strength and sensitivity to the role. Both she and Christopher had great chemistry together. Jenny Winton as the long legged Penny Johnson (Cynthia Rhodes played her in the film) was spot on in both her acting and dancing chores. Veteran actor Mark Elliot Wilson filled Jerry Orbach’s shoes nicely as Baby’s doting father and caring physician. Having worked with many actors in the past, one of the hardest parts for a very talented actor to play is that of an untalented one. Alex Scolari as Baby’s envious and sometimes austic but untalented sister, Lisa Houseman, makes it look easy and is both engaging and funny at the same time. And speaking of comedy, Jesse Carrey-Beaver has great comedic timing as the bumbling and rather awkward Neil Kellerman, the resort owner’s son. Rounding out this superlative principal cast in order of appearance: Margot White as the Houseman’s matriarch, supportive and wise; Doug carpenter as Billy Kostecki/singer (and can he sing – he held a note so long in singing In The Still Of The Night that I thought the chandelier of above me might come crashing down at any moment); Gary Lynch as Max Kellerman, the wry resort owner; Herman Petras as Mr. Shumacher (he was hilarious doing a mean bump and grind – or maybe it was just a bump); Evan Alexander Smith 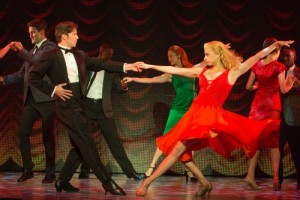 as the narcissistic medical student/waiter Robbie Gould (proving that he can take a pitcher of water down his pants and mop at the same time – you jus  have to see it); Jerome-Harmnann-Hardeman as the loyal right hand of Kellerman, Tito Suarez; and Rachel Marie Bell and John Anthony as the estranged married couple Vivian and Moe Pressman. While it is not always practical to mention the ensemble individually, shout-outs must be given to this incredible team: John Anthiny, Rachel Marie Bell, Danielle Dinz, Sally Glaze, Jennifer Jones, Terace Jones, Mark MacKillop, Kevin Mylrea, Sean Rozanski, and Adrienne Walker.

There were two other stars of this show that must be mentioned: the Dirty Dancing Orchestra and the Scenic/ Media Effects/Stage Design. As for the band, Brian Krock on sax, Andy Tichenor on trumpet, Brad Lovelace on Base, Miles Lassi on percussion, Matt Brown on guitar – you guys ROCK! Props to Conductor Alan J. Plado and Associate Conductor Julie Homi who also were both on keyboard. 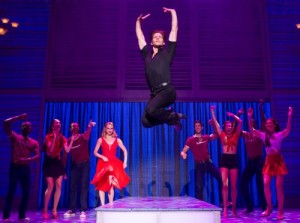 There are so many productions I’ve seen where the scenic design, lightening, special effects etc. end up cheezy and not worth it. Not so here! The scene changes are flawless and the visual overlays on the front screen make you believe that it’s really raining and the characters are really in the water or on a golf course. Kudos galore go to Set Designer Stephen Brimson Lewis, Lighting Designer Tim Mitchell, Sound Designer Bobby Aitken (I feel like I’m giving an Academy Award Speech and running out of time!) and Video Production Designer Jon Driscoll.

Did I mention the direction by James Powell and choreography by Michelle Lynch, Craig Wilson (original choreography by Kate Champion) was awesome? I’m running out of superlatives trying not to repeat any!

If I had any criticism at all, it would be that I was waiting patiently through the whole show for Johnny Castle or someone to sing She’s Like The Wind (a song that Patrick Swayze wrote and sang for the film). I was initially disappointed when only the instrumental was played behind dialogue. But in retrospect, maybe it was better that way – for only Patrick Swayze could do that song justice.

Dirty Dancing is downright dirty fun for the entire family. A MUST SEE!

NOTE: My beloved wife and co-reviewer was holding down the fort at home going to our children’s exhibits and concerts. Stephanie, you missed a great show and I missed you – I promise to make it up to you – it’s officially on my bucket list – to see Dirty dancing with you!