Someday Productions LLC and Pillow Talking are pleased to present the following review of the novel, DEMORN: SOUL FIGHTER (The Asanti Series Book 3) by David Finn 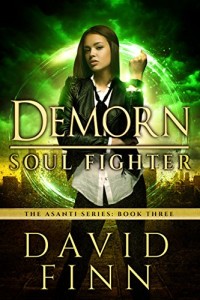 Let me state right up front that I love horror and science fiction. When it comes to sword and sorcerer type of fantasy, however, I am more discerning. While kids in high school were rocking out to Tolkien’s Lord of the Rings and Middle Earth (I still don’t understand where that is), I was consumed with Mary Shelly’s Frankenstein, Bram Stoker’s Dracula, and David Gerrold’s The Man Who Folded Himself. That’s not to say that I do not love the right mix of fantasy and sci-fi – Star Wars being a prime example of one of my all-time faves. But there must be more to it than strange creatures from distant worlds or Conan-types wielding swords through 300 pages.

I stumbled across David Finn’s first book in his Asanti Series – Demorn: Blade of Exile and was an immediate Finn convert (see my review on Amazon). His newest, Demorn: Soul Fighter, is even more intense, engaging, and exciting. And, as an added bonus, it is a stand-alone novel where you do not have to know what happened in the previous two novels in the series (although it helps). Mr. Finn cleverly weaves enough exposition into the action so that a reader can get a full picture of the history and evolution of the story.

As I said in my review of the first book in the Asanti Series, the back story is a quantum physicists dream. The most recent tale begins in medias res like a Greek opus, but do not worry as Mr. Finn has provided a Star Wars-like intro catching us up on the story thus far. Due to a “fracture event,” reality, as we know it, has been turned inside out where multiple parallel universes and alternative realities have converged upon each other. So don’t be surprised if in addition to creatures like Maze, an enormous devil cat that can be confined to a ruby encased cameo (much like Rosenburg’s cat holds the Arquilian Galaxy in its collar in Men In Black II) to popular figures from different eras including Frank Sinatra and General Patton. There also are a plethora of homages to comic books including characters who wear Spider-Man T-shirts.

In the latest of the trilogy, Demorn, a mercenary warrior princess, embarks on a journey to Bay City (a Las-Vegas type of gambling mecca) where she participates in Soul Fight Tournaments (shades of Enter the Dragon). As I described her in my review of Mr. Finn’s first novel in the series, “is one part Katniss Everdeen from The Hunger Games, one part Lara Croft from Tomb Raider, and one part Ellen Ripley from Alien: Resurrection.” You can also add in a dose of Hit-Girl from the Kick-Ass movie franchise.

Her gladiatorial focus soon leads her to team up with sometimes friend-sometimes-enemy, Investigator Iverson, a detective for the establishment, to find the Reset Pyramid so they can reset time and avoid complete annihilation. Along the way, the story unfolds like an iconic Alistair McLean thriller novel where loyalties are tested vetted and double and triple agents abound. Indeed, at several points, nothing is what it appears to be.

The pace is lightning-quick, and you have to pay attention to every detail of the plot or you’ll miss all of the nuances, homages, and layers. Indeed, if you blink or you accidentally lose your place, you could find yourself in another universe and another reality. But in David Finn’s world, that is okay.

Demorn: Soul Fighter is an exhilarating and thought provoking read that will take you from one end of the universe to the other and in countless multi-dimensional stops in between. A must for action junkies and anyone else who loves a mystical, magical, highly literate ride!