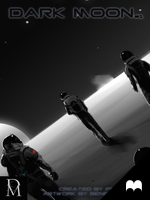 Overview: Dark Moon Comic is a very interesting horror/sci-fi comic. The story follows a group of seven survivors who are fleeing Earth from a massive asteroid collision which leaves California in ruins. A scientist named Dante, with the help of his teleporter, sends the group to a recently discovered moon. Here they encounter a group of hostile aliens and to make matters worse, the air supply is questionable. Luckily they find a door that shelters them from an onslaught ambush.

Benedict Bana’s art is dark and perfectly fits the horror theme. The painting style creates characters which jump out of the page especially notable when the aliens attack. It was gruesomely terrifying when an alien turned Kevin into a delicious Fruit Gusher…sweet.

While the comic is certainly good, it was difficult to invest effort into the characters who fell by the wayside. There wasn’t enough time to establish characters other than “Dante,” however, this looks to be fixed in the next issue. All in all I would say this is a good series and I am proud to know the creator Freematik.