Pillow Talking’s Review of COME FROM AWAY 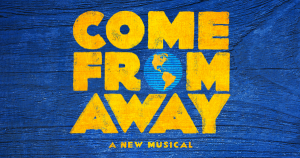 American poet, Jungian psychoanalyst, and post-trauma recovery specialist Dr. Clarissa Pinkola Estés once said, “I hope you will go out and let stories happen to you, and that you will work them, water them with your blood and tears and your laughter till they bloom, till you yourself burst into bloom.” Those stories – the good ones, the bad ones, and everything in between – are borne when we open ourselves to our personal states of being. They arise from the shared experiences we have with others; they happen when we welcome in the world. They bring out the best and the worst in us, our laughter and our tears, and our laughter through tears.

Stories are simply what feed our spirits, feed our souls, and make every cell in us feel alive.

Come from Away is such a story – rather, it’s many stories – of heart and of hope triumphing over hurt and helplessness. It is a masterpiece of musical theatre in this humble reviewer’s opinion and I cannot believe it has taken me this long to see it – or even to know that it existed. And if you, my dear reader, have the opportunity, I recommend that you run, not walk to experience it yourself.

Few if any of us on Earth today are unaware of the September 11, 2001 terrorist attacks. Having killed 2,996 people and injuring over 6,000 others, not to mention many more who suffered or died from its aftermath, four passenger airliners crashed into the North and South towers of the World Trade Center, the Pentagon, and in a field in Pennsylvania. But what many don’t know is that subsequently, countless other planes were not permitted to land in U.S. airspace, including 38 civilian airliners which were diverted to the diminutive town of Gander, Newfoundland. With little forewarning, there were suddenly 7,000 weary and frustrated travelers sitting on the tarmac until they were finally allowed to disembark. A the time, the passengers had little to no knowledge of what had just transpired in America and all they were told was that they had to stay in Gander until airspace could be reopened.

And that’s how this story begins – residents, who number only a few thousand more than the temporary transplants, welcome travelers from all parts of the world into their community with open arms. Loaded from the planes into school buses, the passengers are brought to schools, community centers, and other emergency shelters to be fed, clothed, and entertained. It’s only then that they finally learn the truth of the attacks.

Not unexpectedly, but brilliantly told with warmth and humor, the clash of countless cultures leads to confusion, chaos, and questions; but ultimately there’s considerable bonding that takes place over liquor, fish, cheese, and song. And while the travelers are still reeling from the shock of the events, they are transformed; overcome with feelings of love and appreciation for the hospitality they receive.

And you, as the voyeur, are never far from an all-out belly laugh or eyes brimming with tears.

Irene Sankoff and David Hein who created the book, music, and lyrics for Come from Away, are a married couple and writing team who visited Gander on the tenth anniversary of the September 11 attacks. At the behest of theatre producer Michael Rubinoff, Sankoff and Hein interviewed those who attended the celebratory reunion between Gander locals and the formerly rerouted passengers. The stories they heard became the basis for this spirited, uplifting, transcendent tale. 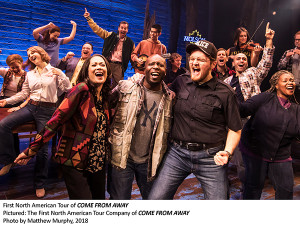 The cast, direction, music, staging, and set design are flawless as is every other element of this production. Tony Award-winning Christopher Ashley (who won the 2017 Award for Best Direction of a Musical for Come from Away) masterfully guides a stage full of triple threats into sheer and engaging brilliance. Two-time Tony nominee Kelly Devine delivers with phenomenal musical staging. The cast, all of whom are equal in every way slip into and out of multiple characters, slight costume changes, and convincing accents as if by magic. And what they all create truly is magical. These incredible artists include: Megan McGinnis as Bonnie and others; Harter Clingman as Oz and others; Becky Gulsvig as Beverley/Annette and others; Emily Walton as Janice and others; James Earl Jones II as Bob and others; Kevin Carolan as Claude and others; Andrew Samonsky as Kevin T./Garth and others; Chamblee Ferguson as Nick/Doug and others; Nick Duckart as Kevin J./Ali and others; Danielle K. Thomas as Hannah and others; Julie Johnson as Beulah and others; and Christine Toy Johnson as Diane and others.

Kudos to Beowulf Boritt for his simply superb set design and to Toni-Leslie James for costume design that perfectly lends itself to represent the everyday people whom we quickly come to love. To Howell Binkley for lighting design; to Gareth Owen for sound design; to August Eriksmoen for orchestrations; to Ian Eisendrath for music supervision and arrangements; to David Lai as Music Coordinator; to David Brian Brown for hair design; and to Joel Goldes as Dialect Coach.

With musicians who appear on stage and come into the action from time to time, major shout-outs must go to the band: Cynthia Kortman Westphal as Conductor/Keyboard/Accordion/Harmonium; Isaac Alderson on Whistles/Irish Flute/Uilleann Pipes; Kiana June Weber on Fiddle; Adam Stoler on Electric/Acoustic Guitars; Matt Wong on Acoustic Guitar/Mandolins/Bouzouki; Max Calkin on Electric/Acoustic Bass; Steve Holloway on Bodhran/Percussion; and Ben Morrow on Drums/Percussion.

There are so many others who deserve to be noted but space limitations and typing fatigue are setting in. I truly cannot say enough about Come from Away – it is powerfully affecting and in so very many ways, why I not only review, but write in hopes that someday I may impact others with my art in the way this production has impacted me. Come from Away is absolutely stunning.

9/11. This was another day of infamy as Franklin D. Roosevelt would have said if he were alive today. What good could possibly come out of a tragedy so egregious and so devastating?

Come from Away, a musical based on the true story of how Newfoundland handled the diversion of 38 planes bound for the United States and somehow provided for seven thousand travelers for five days proves that the human spirit cannot be destroyed; that generosity, kindness and charity will somehow thrive in our darkest of times. Come from Away demonstrates that despite evil, goodness will not only endure, but ultimately triumph. Come from Away will thrill, haunt, depress, inspire, and remain with you long after the curtain comes down. Come from Away, like life, will have you laughing one minute and crying the next. Come from Away is the perfect storm: the incredible coming together of perfect casting, direction, talent, music and writing.  You will come away from Come from Away with the knowledge that you have just witnessed a theatrical masterpiece.

Come from Away is, quite simply, one of the best stage shows I have ever seen.