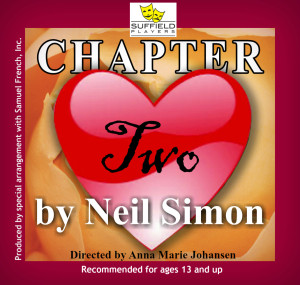 I am a firm believer in new beginnings. New opportunities. Starting over. Call it what you will, but for most of us, the first time around doesn’t always pan out. Whether we have failed of our own accord or must start anew for reasons beyond our control, we are wise to take what we have learned and apply it as we move forward. That goes for just about anything, even in the sometimes daunting realm of interpersonal relationships. I should know – it’s happened to me. I’m married for the second time and couldn’t be happier. Ecstatic, really. And because of it, I also now believe wholeheartedly in what used to only be some vague, shadowy concept – that of soulmates. I found mine on this, my second trip around the merry carousel of life.

But I was ready. And that’s important. On the contrary, George Schneider wasn’t. And neither was Jennie Malone. George and Jennie are the love-on-the-rebound main characters in Neil Simon’s 1977 dramedy, Chapter Two, which took to the boards at the Suffield Players’ Mapleton Hall.

So often art imitates life; Simon reportedly wrote this semi-autobiographical work as something of a catharsis, to deal with his own protracted grief over the devastating loss of his first wife of 20 years, Joan Baim. It also was a tribute to Marsha Mason, his second wife, who stood by him through the vicissitudes. 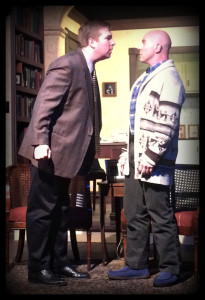 George is a successful writer who has lost his beloved wife of a dozen years. His well-meaning brother Leo is trying to help him move past it, including setting him up on blind dates; but George is still raw and not emotionally ready to push on. Jennie, who is dealing with the heartbreaking demise (due to divorce) of her six-year marriage, isn’t sure she’s ready to throw own hat in the ring yet either, but her meddlesome friend Faye is making certain she does. Soon George and Jennie find their way to each other and its instant attraction – over the phone – but can they hold on to it when their wounds are still festering? That remains to be seen as their two-week whirlwind romance culminates in a marriage proposal.

When a person processes grief, according to what is called the Dual-Process Model, they must engage in two actions; they will face the loss head on and also find a way to move past it by reconstructing their lives. For a while, both George and Jennie oscillate between confronting and avoiding; and while it’s healthy to do so, it doesn’t always work, nor is there any precise algorithm. But like life, there are ups with the downs, humor with the sadness; and Suffield’s talented cast will have you believing that you’ve been viewing their actual experiences, rather than seeing a play.

Paul Robert Tafoya is powerful as the grieving widower, tapping into the character’s conflicted psyche with tremendous authenticity. While George tries to attend to the new life he must forge and really seems to desire, his grief intrudes like the proverbial bull in a china shop, leaving a broken mess in its wake. Amanda Marshcall as Jennie delivers a multi-layered performance of a woman who is both suffering and supportive; pained and patient; lost and loving. Their chemistry is palpable as the two dance the dance of life on the rebound.

Ryan Bird is spectacular as Leo, the can’t-keep-it-in-his-pants little brother whose heart always is in the right place even if his er…other parts aren’t. He has wonderful comedic timing and his warmth toward George feels entirely genuine. Lisa Parker is the quirky, sharp, spirited BFF we’d all love to have – albeit one who might wear us out from time to time! She brings on a lot of laughs, deftly bouncing between inter-apartment voyeurism (complete with binoculars), Dear Abby advice delivery, husband bashing, and the possibility of extramarital hanky panky.

Suffield cultivated four real gems in its stellar cast, but the fifth treasure was in its director, Anna Marie Johansen. Her keen insight aside, she led the company with incredible sensitivity. A show like this only works when you as a member of the audience feel all the feels. When the story both tugs at your heartstrings and brings a tear to your eye – and it did, in droves. You’re drawn in and are able experience the same roller coaster of emotions of its characters.

Like another character, the set had a personality all its own – thank you to Set Designers Konrad Rogowski and Kelly Seip for their thoughtful attention to detail. True to Simon’s script, the his/hers split stage reflected the characters of George and Jennie. Kudos to Bob Williams, Stage Manager extraordinaire; Chelsea Viets, Producer; Laura Filshtein, Costumes; Jerry Zalewski, Lighting Designer; Al LaPlant and Mark Proulx, Lighting Technicians; and all of the rest of the production crew for their incredible work.

The Suffield Players never disappoint in choosing which works to take from page to stage, and you can be assured that their careful consideration will result in exceptional, professional-quality community theatre. Thank you Suffield! See Chapter Two – you’ll be glad you did!

I love living. I have some problems with my life, but living is the best thing they’ve come up with so far. – Neil Simon.

Growing up in the years between 1960 and 1980, the works of Neil Simon were everywhere and it was literally nigh impossible not to come across something by him in some media outlet. There were films adapted from his plays like The Odd Couple with Jack Lemon and Walter Matthau, Barefoot in the Park, The Goodbye Girl, The Sunshine Boys, etc. On television you had another version of The Odd Couple with Tony Randall and Jack Klugman. Brighton Beach Memoirs was the first Neil Simon play I saw on Broadway with, at the time, a very young Matthew Broderick. Neil Simon was quintessentially the King of All Media (my apologies to radio shock-jock Howard Stern who self-proclaims himself to be King of All Media).

Chapter Two, semi-autobiographical, is about a writer getting back into the dating game after the passing of his lifelong love and presumably his soulmate. According to one source, Chapter Two was written as a tribute to then wife, Marsha Mason (who also starred in the film) for putting up with Simon’s extended mourning and longing for his first wife. 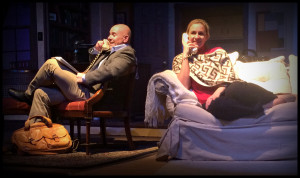 Many of his works, especially his plays, are not performed as often as they used to be both on the national and the regional/local circuits. I think one of the reasons (and it’s just my opinion) is that his works are not old enough to be considered classics and not new enough to be considered modern or topical. Case in point: there’s a pivotal scene in Chapter 2 where George is intrigued by the person he misdialed and keeps calling her back. By today’s standards, no one talks on the phone anymore and if someone kept calling the way George does, he would be a labeled a stalker, arrested for harassment, and slapped with a restraining order.

Nevertheless, Neil Simon’s works are still relevant today ultimately because they are about people: their aspirations, faults, desires, hopes, dreams, loves, etc. And people haven’t changed in that regard, although the means and methods of modern technology facilitate their interactions via different methods. So instead of George constantly telephoning Jennie; in an updated version of Chapter Two, he may be swiping his fingers until they bleed on Tinder.

It was such a pleasure, however, to see Suffield’s version of Chapter Two and be transported back to a time when people still talked over the phone, met in public, and communicated face-to-face with each other. As always, The Suffield Players have a consistently high level of quality with every production they do. Chapter Two is no exception. Casting, direction, acting, and scenic design were all spot on. 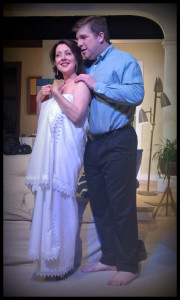 Let’s start with the casting and acting. All four principals had wonderful chemistry which underscored the verisimilitude of their individual performances. I remember seeing the softer side of James Caan as George in the film version and thinking he was an excellent choice (it was casting against type at the time since Caan was still somewhat under the shadow of the rough Sonny Corleone). Similarly, Suffield’s choice to have Paul Robert Tafoya play George was an excellent casting choice. He brought just the right amount of testosterone mixed with saccharine sweetness to make him charmingly attractive. Amanda Marschall as Jennie was the perfect match for him, giving a nicely layered portrayal of strength, vulnerability, and independence. Both of their respective sidekicks and matchmakers played by Ryan Bird (Leo) and Lisa Parker (Faye) were knock-down-drag-out-hilarious. (As a total aside, I loved reading Mr. Bird’s personal stats on everything from rollercoasters to pints of Guinness – with that booming voice and head for numbers, he would make a great sports announcer!)

Turning to direction, Anna Marie Johansen did a fantastic job of channeling Neil Simon’s themes of love lost and love regained as well as his authenticity for sharp, witty dialogue through her masterful direction and staging. As she states in her note, “[a] director controls all the strings that bring a story to life…[a] director conjures life from black scratches on blank pages.” Ms. Johansen did a great job on both counts There is no doubt that Simon’s characters are flawed but still three-dimensional and, most importantly of all, likeable – because in the final analysis they are us. And it takes an astute director to recognize that and to convey it.

Finally, I would be remiss not to mention that a production like this could not be successful without the hard work and devotion of a selfless crew with only one goal in mind – the best production possible. So hats off to the entire Suffield crew. Although too numerous to mention all of them individually, I would like to give a shout out to Robert Charles Williams, Jr. who served as Stage Manager and Konrad Rogowski, Kelly Seip and all of the members of the Set Construction Crew for their brilliantly detailed split set that accommodated the side-by-side duet scenes between the characters and made them so much more effective.

In my research for the review, I did find that there was at least one relatively recent production of Chapter Two that updated it and even used cell phones! In a recent Pillow Talking interview with actor/director and theatre icon, Terrence Mann, he said, “if [a play] is not broken, there is no need to fix it.” I am like- minded when it comes to the works of Neil Simon. His witty dialogue and carefully crafted characters transcend the artifice of technological innovation and period contrivances. Neil Simon’s plays always will be evergreen just the way they are. Thank you, Suffield, for this terrific production!