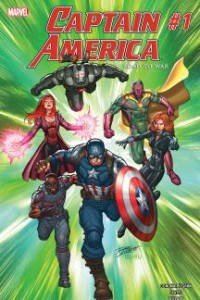 Story By: Will Corona Pilgrim

As you may have guessed, this Captain America title leads up to the next Marvel movie, Captain America: Civil War. While not much happens in this comic, it is a great bridge between Age of Ultron and Civil War. Nevertheless, it can be hard to keep track of the whole canon of the Marvel Cinematic Universe (MCU) because there are 12 different movies dating back to 2008 as well as the often overlooked Agents of Shield on ABC.

This comic views the progression of the new Avengers (Captain America, Scarlet Witch, Vision, Falcon, and War Machine). The group must put their skills to the test and form a working team; their mission is to stop HYDRA who has built a giant called Ultimo out of Ultron scraps. We also see each character’s evolution since last we saw them, from both their personal lives to honing their particular skills.

The art by Andrea Di Vito is oftentimes quite spectacular, especially with regard to Falcon and Scarlet Witch. It is crisp but at the same time laid back depending upon each shot. Di Vito easily captures different characters’ emotions and underlying subtleties; this isn’t new for him as he has been around the block and has a strong grasp on Marvel’s material.

So if you are looking for a way to bridge the gap between Avengers: Age of Ultron (Ant-Man) and Captain America: Civil War, look no further! As a bonus, this also includes a bit of extra material, Tales of Suspense #58 (1959).