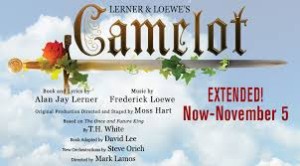 And there you have it; yet another classic I hadn’t seen which now has become a part of my bursting theatre scrapbook. And where better to have had the opportunity than at Westport Country Playhouse – the premier theatre venue which has been host to countless legends in the business and which stages nothing but top-notch productions. Based upon the fantasy novel The Once and Future King by T. H. White, Camelot, directed by Westport’s artistic director Mark Lamos, is a splendid tale of the lore surrounding the idealist King Arthur, his undying love for Guenevere, and the illustrious Knights of the Round Table.

With perfectly appointed, minimalist staging, a show of this quality did not require the luxuriant excesses of a royal castle to succeed or to wow its audience – it instead allowed for the radiating opulence of its exceptional cast to be front and center. Kudos to Michael Yeargan for fabulous scenic design that provided the perfect backdrop and highlight to the action. 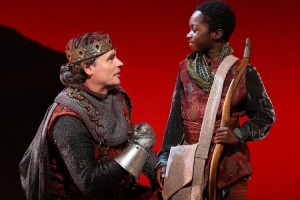 The musical opens with a boy in pajamas playing with toy knights – an excellent Sana Sarr as young Tom whose mere presence takes us back to our own tender years of wonder and make believe. Very soon the action begins; King Arthur is about to be married but clearly has a case of cold feet. What a delight (and a coup!) it was to see a sensitive and vulnerable Robert Sean Leonard as Arthur, a talented actor whom I loved for eight seasons on TV’s House, and who has countless Broadway and other stage, and film credits (including his screen debut in Dead Poets Society). Shortly thereafter, King Arthur, quite by accident, falls head over heels for his betrothed whom he has never met – Lady Guenevere played by the spirited, talented, and beautiful songbird Britney Coleman; now with stars in their eyes, the two head blissfully for Camelot where they are married. 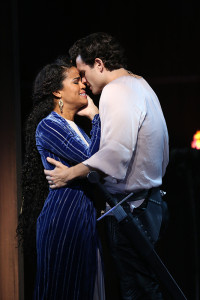 After some time, King Arthur ponders the world as it is, growing weary of fighting and pillaging; instead longing for a world of honor, justice, and chivalry – “Might for Right” as it were. With the support of Queen Guenevere, he sets about to find knights of this new caliber who can fill his boundary-less Round Table. Sir Lancelot, a Frenchman (played by a dashing and debonair Stephen Mark Lukas), soon arrives but before long his mere presence turns Camelot upside down – creating dissention among the other knights but more importantly, turning the head of the Queen. Thus, a love triangle and an interminable air of betrayal fills Camelot. But that’s not the only murkiness to befall the kingdom – the malevolent Mordred, Arthur’s bastard child, comes forth and also seeks to bring ill will to Camelot. The dynamic and charismatic, albeit foul fellow is flawlessly portrayed by Patrick Andrews who brings the pivotal crisis to a head in Act II; and he’s dastardly spot-on in “Seven Deadly Virtues.”

The rest of the cast play multiple roles, at times donning beautiful masks, slipping seamlessly in and out of their characters. A great big hand goes to the multiple talents of Michael De Souza as Reveler/Squire Dap/Young Page, Mike Evariste and Reveler/Dinadan, Brian Owen as Reveler/Lionel, and Jon-Michael Reese as Reveler/Sagramore. With classic songs as “Lusty Month of May,” and “Then You May Take Me to the Fair,” they shine as they encircle the lovely Guenevere.

I also especially loved “What Do the Simple Folk Do?” with Arthur and Guenevere, “How to Handle a Woman” by Arthur, and “I Loved You Once in Silence,” with Guenevere and Lancelot. It should be noted however, that there was not a sour note to be heard.

Despite the darker themes of betrayal, despair, and tragedy, Camelot continually renews us with its themes of love and friendship, honor and hope. As in real life, it brings humanity and all of its inherent flaws to the impossibility of the fairy tale. And as expected, Westport Country Playhouse does it with finesse. Thank you Mark Lamos for always bringing beautiful theatrical works to Connecticut and beyond!

“Don’t let it be forgot
That once there was a spot,
For one brief, shining moment
That was known as Camelot.”

One of the high points in my career of culture-vulturism was seeing the late, great Richard Burton reprise his role as Arthur in the Lerner and Lowe musical Camelot in the summer of 1980. If truth be told, I do not remember much about the production other than Burton himself. He had such a commanding presence whether on stage or in film.

I am pleased to report that Westport Country Playhouse’s production of Camelot is thoroughly engaging, entertaining, and truly memorable. Every part of the show was like a gigantic jigsaw puzzle where the pieces represented by casting, scenic design, costumes, choreography, etc. fit perfectly together. The story depicts the rise and fall of King Arthur, his marriage to Guenevere and the Knights of the Round Table. The Arthurian legend comes to life via a child’s imagination as he plays with toy knights – a nice touch to open the play. Sana Sarr plays the child, Tom, and is simply a joy to watch. 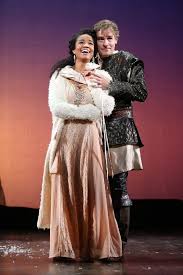 And speaking of casting, Robert Sean Leonard pays a perfect King Arthur. Like Burton, Mr. Leonard has a commanding presence and voice. But he also brings an undeniable sensitivity and romantic idealism to the role that underscores the character’s humanity. Indeed, the audience can see the metaphorical chinks in his psychological armor providing more verisimilitude to Arthur’s fallibility as a human being. Britney Coleman is in a word – wonderful – as the young Guenevere: sassy, vulnerable, intuitive, sensual and passionate. Ms. Coleman brings a fresh, youthful verve to the role. Lancelot is audaciously played by Stephen Mark Lukas. Mr. Lukas also has a commanding presence tempered by just the right amount of comedic underpinning. One definitely can see why Arthur takes a shine to him and Guenevere falls in love with him. The evil Mordred is devilishly played by Patrick Andrews. You know an actor is doing a great job playing a villain when all you want to do is slap that silly grin off his face! (Yes, I edited that statement.) Shout outs also must go to the rest of the cast Michael De Souza, Mike Evariste, Brian Owen, and Jon-Michael Reese. (An extra shout out to Tara Rubin Casting.)

The interlocking puzzle pieces of staging, blocking, directing and choreography (which work so well together) are the creative and brilliant work of director Mark Lamos and choreographer Connor Gallagher. Although I sometimes am remiss in not mentioning the following crew positions, it would be a violation of Arthurian law not to give shout outs to the great work of Michael Yeargan for scenic design, Wade Laboissonniere for costumes, Robert Wierzel for lighting design, and Domonic Sack for sound design.

Lest we forget, Camelot is an iconic musical with great show tunes. I had chills when Lancelot and Guenevere performed one of my favorite songs of all time, “If Ever I would Leave You.” Kudos to music director Wayne Barker and the orchestra.

Perhaps it’s a sign of age (and wisdom?) but Camelot meant so much more to me when I watched Westport’s production. Back in 1980, I was still young and naïve, a fledgling culture-vulture, relatively untouched by life’s inevitable rollercoaster ride of ups and downs. The quote at the top of the review, for me, sums up the theme of the play and maybe even life itself. For one brief, shining moment there was Camelot – where it never rained and everything was perfect. Maybe that’s all we can hope for in life – those brief, shining moments when there is peace, love and everything is perfect.