For More Info or to Purchase Tickets

Whenever a classic production that I’ve yet to see makes the rounds in our theatre circles, I feel like a bright-eyed child who’s been eagerly awaiting an invitation into some special club. As the progeny of theatrical parents who themselves performed in a number of these types of productions, it’s always a surprise to many that I have not in fact, seen a great number of the standards (even my husband/co-reviewer ribs me about it from time to time). 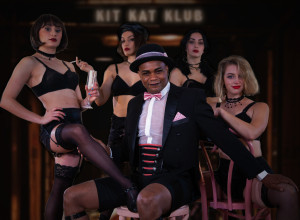 The most recent of such ventures was Connecticut Repertory Theatre’s (CRT) Cabaret, the final show of their 2019 Nutmeg Summer Series, headed by Artistic Director Terrence Mann. A fierce production, Cabaret explores powerful material layered with a heavy dose of razzle-dazzle. With a book by Joe Masteroff based on the play by John Van Druten and stories by Christopher Isherwood; music by John Kander and lyrics by Fred Ebb, Cabaret transports us to 1929-1930 Berlin in the midst of post-World War I depression when the rise of the Nazi Party looms large. American Clifford Bradshaw, an English teacher and starving novelist who’s looking for writing inspiration, strolls into the seedy Kit Kat Klub which is hosted by an eccentric, flamboyantly gender-bending Master of Ceremonies, known only as the Emcee. While there, Cliff, despite being sexually uncertain himself, is instantly smitten with the British Sally Bowles, a vibrant cabaret performer who works hard to hide a vulnerable and uncertain underbelly. The two begin a whirlwind romance, but it is not without its troubles; and all around them, people have their own share of problems as Berlin is swiftly changing.

Cabaret, expertly directed by Scott LaFeber and wonderfully choreographed by Christopher d’Amboise, is provocative and heady as it delves into political and social themes including Nazism, hate and anti-semitism, relationships, fear, and survival. Throughout the production, the Emcee narrates the events both in and beyond the Kit Kat Klub, most of the time draped with colorful (and scantily clad) ladies. The comedic and strange Emcee is expertly played by the brilliant Forrest McClendon, a Tony Award nominee for Broadway’s The Scottsboro Boys. We’ve been fortunate to see McClendon before for CRT’s fabulous Peter and the Starcatcher. The unpredictable Sally Bowles is played by dynamo Laura Michelle Kelly, whom I hope I have many opportunities to see in the future. Rob Barnes, a 3rd year MFA Acting candidate at UCONN nailed his portrayal of Clifford Bradshaw, proof positive why UCONN and CRT continue to yield incredible talents. 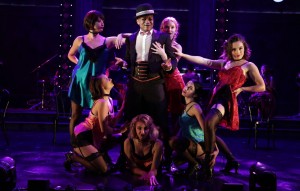 Dee Hoty as Fraulein Schneider, the landlady who rents a room to Cliff upon his arrival in Berlin, delivers a fantastically authentic performance. She has great chemistry with the delightful Jonathan Brody who plays her paramour, Herr Schultz, another of her tenants and owner of a fruit shop. Leslie Blake Walker as Fraulein Kost (and a Kit Kat Girl) is both sensual and comical as the boarder with a penchant for sailors. Aidan Marchetti excellently rounds out the principals as Ernst Ludwig, the initially likeably German who meets Cliff and directs him to Schneider’s boarding house and soon becomes his friend. The rest of the cast comprising the gestalt each bring talent and verve to the stage: Jamie Colburn as Customs Official/Herman/Max/Male Ensemble; Tomas Bergamo as Hans/Male Ensemble; Cole Thompson, Mike Katz, and RJ Higton as Male Ensemble; and Torie D’Alessandro, Emma Dowdy, Rebekah Santiago, Sydney Skye, and Madeline Dunn as the sultry Kit Kat Girls.

What good is sitting alone in your room? / Come hear the music play / Life is a cabaret, old chum / Come to the cabaret

I can still hear the lyrics zooming through my gray matter like a proverbial earworm. Or perhaps it’s my husband’s off-key singing I’ve been continually listening to since we set out on our ride to the theatre and just about every day since. The bottom line is whether you’ve seen it before, or like me, are taking it in for the first time, you’ll want to come to this Cabaret; as with all of their productions, CRT hits it out of the park.

I am certain that in the nature vs. nurture argument, my present culture vulturism was, at least, in some part attributable to my parents who were both exceedingly intelligent, avid readers (especially my dad), somewhat liberal in allowing me to partake of the arts, and the geographical fact that I lived up the street from a movie theater (my second home). I remember watching the film Cabaret in 1972 and was literally dumbstruck by the performances of Joel Grey and Liza Minelli. Like Pavlov’s dog, the mere mention of the word, “cabaret,” triggers the synapses in my brain to conjure images of Grey, Minelli and the Kit Kat Klub as if it was yesterday (or 1972).

When I heard that Cabaret was the second show in the 2019 Nutmeg Summer Series at Connecticut Repertory Theatre (CRT), I could not get any of the aforementioned images of out of my mind. It was like one of those annoying GIFs that people embed in their social media posts that keeps repeating over and over. I suffered a bit of trepidation about how one can tamper with an iconic film. As my mother was wont to say on many occasions, “If ain’t broke, don’t fix it.” Perfect examples may be the remakes of the incredible films Papillion or Ben Hur. What? You didn’t even know they made remakes? Ergo, my point.

But I digress. Back to CRT’s version of Cabaret. I am thrilled to say that Artistic Director, Terry Mann, rolled the dice and came up a winner again. Cabaret was simply wonderful in every way. 1972 was a long time ago, and I did not remember all the subplots (which did not matter anyway because most of the play’s subplots were left out of the film). The film is considered “loosely” based on the 1966 Broadway musical. Many plot elements in the stage play were changed or excised from the Bob Fosse film version. 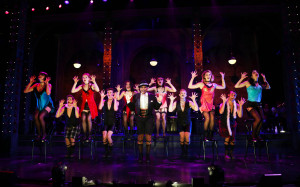 So, watching CRT’s production was like watching a completely new, fresh theatrical piece. The setting is Berlin in 1931, a time when the Nazi party is vying with other political parties for ultimate power in Germany. The Kit Kat Klub, where some of the action takes place, represents both a pre-war innocence and a hedonistic philosophy. Indeed, the club was a magnet for all types to come together and share in the entertainment and atmosphere which runs from the quirky to the sublime. Clifford Bradshaw, an American writer who is desperately trying to break his present writer’s block, ends up in Berlin and becomes a frequent visitor to the club. One of the main attractions is Sally Bowles, a beautiful English singer and dancer. Needless to say, these two transplants find each other and, for a time, love (or something like it) flourishes. A beautiful subplot, which is not in the film, concerns another star-crossed pair of lovers – Fraulein Schneider who runs a boarding house and the local grocer Herr Schultz. It is not much of a spoiler to say that the fact that Herr Schultz is Jewish eventually becomes not only a wedge between the pair, but a harbinger of the maelstrom that was about to occur. 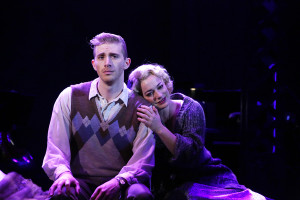 The casting is spot on. Will I forget Joel Grey’s, Liza Minelli’s and Michael York’s respective portrayals in the 1972 film? No, but at least I have another basis for comparison and an excellent one at that. The pivotal role of the Emcee always seemed like an omnipotent and omnipresent character – much like the character of Mr. Roarke in the old TV show Fantasy Island who knew about everything and everybody and nothing occurred on his island without his stamp of approval. Triple threat Forrest McClendon gives a masterful performance as the enigmatic Emcee. (Pillow Talking loved Forrest in CRT’s Peter and the Starcatcher. See our interview with Forrest.) Laura Michelle Kelly is pitch perfect as Sally Bowles. She also has great chemistry with tall and dashing Rob Barnes who plays the American in search of a novel idea, Clifford Bradshaw. 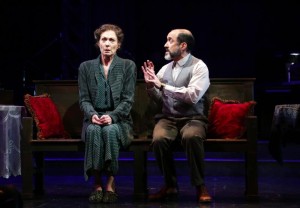 It is difficult, if not impossible (especially for a cinephile) in providing a comprehensive review to not draw comparisons between stage and cinematic versions, especially when discussing Cabaret, one of the most acclaimed and iconic films of all time. I liked the film version’s dichotomous rendering of the story where the musical numbers were confined to the interior of the Kit Kat Klub. Yet, in so doing, certain things had to be dropped from the stage version and one of them was the touching subplot of the romance between Fraulein Shneider, the spinstery owner of the boarding house and the local Jewish grocer Herr Schultz. Dee Hoty (Fraulein Schneider) and Jonathan Brody (Herr Schultz) gave knock-down-drag-out performances. Ms. Hoty’s “So What” number is worth seeing for this reason alone.

Shout outs must go to the rest of the cast including Aidan Marchetti who has just the right balance of charm and snake oil as the Nazi Enrst Ludwig; and Leslie Blake Walker is delightful as Fraulein Kost. Jamie Colburn should get a special shout out for quadrupling as the Customs Official/Herman/Max/Male Ensemble. Although I do not always mention all of the Ensemble actors due to spatial limitations, I make an exception with CRT because with a program like theirs which pairs students and new talent with professionals, you never know who in this Ensemble may be the next Tony-winning star. So kudos to the Ensemble: Thomas Bergamo, Cole Thompson, Mike Katz, RJ Higton, Torie D’Alessandro, Emma Dowdy, Rebekah Santiago, Sydney Skye, and Madeline Dunn.

Props go to Scott LaFeber for directing this extremely complex play with so many moving parts and yet keeping a cohesive story line.  It is always a pleasure to see the creative choreography of Christopher d’Amboise.

So what’s the bottom line? What good is sitting alone on a hot summer night? Go to CRT’s Cabaret.