Someday Productions LLC and Pillow Talking are pleased to present the following review of the world premiere of Burning Desire written by and starring Lou Diamond Phillips at the Seven Angels Theatre in Waterbury, CT. 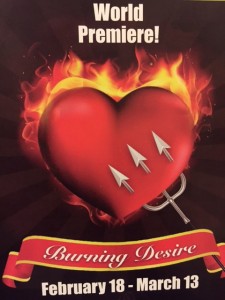 Is the Devil in the details? Or is God in the details? They are age old questions – certainly as old as the differences between men and women, love and hate, good and evil. These themes are humorously and insightfully explored in Lou Diamond Phillips’ original play, Burning Desire.

My wife (and co-reviewer) and I had the pleasure of experiencing the world premiere of the play at the Seven Angels Theatre. All I can say is, look out Great White Way, the Devil is headed to New York! It was fabulous! 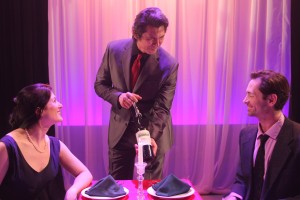 The plot is devilishly simple yet elegant. The Devil sets up a modern day Adam and Eve to fail in love so he can end up having both of their souls for all eternity. The Devil (aka Lucifer) pontificates to the audience while he guides and tempts the growing romance between Evan (aka Eve) and Andrew (aka Adam). While Faustian-themed plays have tempted theatre audiences in the past (most notably Damn Yankees), Burning Desire is unique in many ways. The biggest difference between Burning Desire and other soul-for-sale theatre fare is that Lucifer is so damned likeable! He’s handsome (a good dresser, too) and smarmy yet funny, charismatic, charming, and honest (yes, that’s not a typo – the Devil is quite honest in his rants throughout the play). 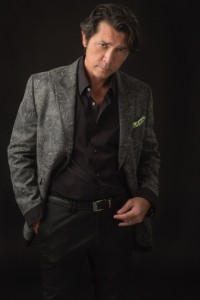 The work was penned by veteran stage and screen actor, director, writer Lou Diamond Phillips. The dialogue is sharp, witty, and tight. But what makes it come to life, of course, is Lou Diamond Phillips’ portrayal of the Devil. More used to seeing his dramatic acting chops, I must say that I was surprised (and thrilled) to see his abundant comedic ones as well. He was hilarious! His breaking the fourth wall and interacting with the audience was priceless. He was charming and engaging and he truly knows how to work a crowd. Without giving too much away, in addition to Lucifer, he also doubled as Lucifer playing other characters which in itself was riotous. I was belly laughing (not just guffawing) multiple times throughout the play. Watching Mr. Phillips’ performance reminded me of the lovable Devil character played by Ray Wise in the short-lived but excellent television series Reaper. It was really hard not to root for the Devil to win! Besides, can Hell really be that bad if Lou Diamond Phillips runs the place? Wouldn’t it be better to live under his rule than serve in heaven? (Milton just turned over in his grave on that one!)

The play also reminds us that human beings have both light and dark sides.  Like Tom Hulce’s character Pinto in Animal House, we all have an angel on one shoulder and a devil on the other vying for control over our choices, actions and decisions. 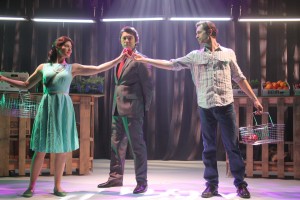 The other actors were awesome as well. Tara Franklin as Evan and Ryan Wesley Gilreath as Andrew made the perfect modern day Adam and Eve. They had real chemistry together and their growing relationship smacked of the reasons why men are from Mars and women are from Venus. More than mere caricatures or Adam and Eve clones, their portrayal had depth and there were definite arcs to their characters that surprised the Devil himself! Shout outs also must go to the vivacious pair of satanic helpers, Sophie Lee Morris and Jackie Aitken as, respectively, Minion Dancer #1 and Minion Dancer #2. There was some devilishly (there’s that word again) eye-catching dancing (thank you, choreographer Mic Thompson) and some really funny Minion moments.

As Mr. Phillips says in his playwright notes in the program, “Art begets Art” and acknowledged “all the influences that shaped the final product.” Theatre is truly a collaborative endeavor. Accordingly, kudos must go the brilliant and masterful direction by experienced director and actor, Richard Zavaglia. I often compare great directing with playing chess. In this case, Mr. Zavaglia was a Grandmaster at moving his actors through their paces. Not to mention that the staging and blocking were excellent. His directing displayed the subtle but unmistakable blending of comedy, drama, verve, and schmaltz.

Have I gushed enough? The Devil made me do it. Do what you must to see this play – even if it means selling your soul (although I think the ticket prices are far less expensive.)

I am certain that heavenly things are in store for Burning Desire (pun intended). As I write this review in my office overlooking Broadway, I’m thinking that when this play comes to New York, I’ll welcome it with the immortal words of E.K. Hornbeck in Inherit the Wind – “Hello Devil. Welcome to Hell.”

Sigmund Freud, the father of psychoanalysis and one of the most well-known, earliest contributors to the understanding of the human mind and motivation once told a patient, “…the moral self [is] the conscious, the evil self [is] the unconscious.” Although many of his theories were a bit flawed, he imparted to us that we humans are but feeble creatures continually striving to keep such wickedness at bay, battling our own impulsive and often irrational inner psyches, while donning masks of rationality and reason. Some of us, however, are more successful than others – but when it comes down to it, the devil makes us do some pretty shameless things, doesn’t he? At least that’s what we prefer to tell people. 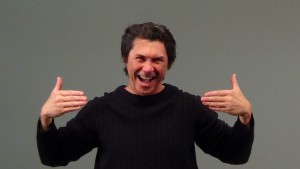 That evil self if you will (Freud termed it our “id”) was skillfully, snarkily, and comically camouflaged as Lucifer in Burning Desire, the wild romp penned by and starring powerhouse multi-hyphenate Lou Diamond Phillips. Actor, director, writer, and producer, maybe best recognized for such screen roles in La Bamba, The 33, and Longmire, Phillips is no stranger to the stage. Earning a Tony Award nomination (among others) for his performance in The King and I, he also holds a BFA in drama and has been writing since his college days. His original romantic comedy about love and all of its subsequent foibles and faux pas, took to the boards this month in its world premiere at Seven Angels Theatre in Waterbury, CT. Phillips’ labor of love, which he acknowledges was precipitated by a bad break-up, became a joint venture with his long-time friend, producer, director, and veteran actor Richard Zavaglia.

This star-driven vehicle couldn’t have had a better pilot at the helm. Like a true impresario, Phillips opens Burning Desire with a rib-tickling and fittingly wicked discourse about love, pandering to rousing theatregoers who eagerly eat up every word – fourth wall be damned! He embodies the malevolent rogue and repeatedly impresses his audience with spicy and delectable monologues which are thread throughout the production. 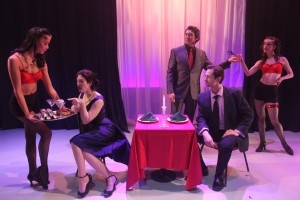 Enter present-day Adam and Eve – Andrew (Ryan Wesley Gilreath) and Evan (Tara Franklin). The charming and talented duo, we learned, was plucked from a pool of about 500 potentials during auditions. Gilreath and Franklin had terrific chemistry (which was why they were cast) and both brought a superb authenticity to their roles, making us believe that they actually were struck-down by the devil, having fallen in love at first sight. But why, one might ask, would the devil choose to facilitate love? Wouldn’t we expect him to have more contrary, sinister intentions? Oh, what a tangled web we weave… But of course! Lucifer’s plan was to gleefully interfere with their love-bound trajectory; to wreak havoc on their hearts and minds and ultimately snatch their souls for his own devices.

At its core, Burning Desire is about the differences between men and women. It also is about the things we say and the things we don’t. The things we do and the things we shouldn’t. And the things we think or the things…the Devil puts into our heads. It is light, it is fun, and it goes further to touch on the deeper and more complex components of love – the troika of intimacy, passion, and commitment as psychologist Robert Sternberg explained it. Love he said, cannot be defined simply, but instead it encompasses intimacy (closeness, trust, sharing), passion (the physical aspects), and commitment (decision to maintain the relationship). Consummate love – that of the ideal and everlasting kind – is the combination of all three. Lucifer tempted Andrew and Evan with the hope for such; but then did everything possible to thwart it at every turn. 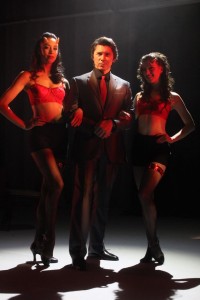 The perfect complement to the dastardly but handsome, dapper devil were his two dancing Minions played by Sophie Lee Morris and Jackie Aitken. With impressive dancing and acting credits (including Aitken’s newest achievement in becoming one the of the famed Rockettes) the two brought exceptional dancing prowess coupled with cheeky, puckish energy to the stage thanks in great part to Mic Thompson’s delightful choreography.

Taking sure command of Phillips’ story was Zavaglia. He expertly guided the troupe through all of its elements, rife with multiple but seamless scene changes. He navigated the play’s design taking it from monologue to character action and dialogue, then back again. Dropping in some humorous surprises, the production was lively, layered, witty, and meaningful. In the end, everyone could identify with some or many of the situations in which each character found him or herself.

The minimal but spot-on set design by Matt Martin, dynamic lighting by Matt Guminski, and effective sound elements by Matt Martin pulled it all together. Vivianna Lamb’s costume design also was simply perfect.

Twists and turns took us to the end of the line for the two lovebirds. Who won – or aren’t there ever winners in the game of love? Did they find themselves where they ultimately were destined to be? You’ll have to head over to Seven Angels Theatre to find out! Burning Desire had its fantastic first stop in Waterbury, Connecticut – but from here? Let it be Broadway bound!