Pillow Talking’s Review of BRING IT ON 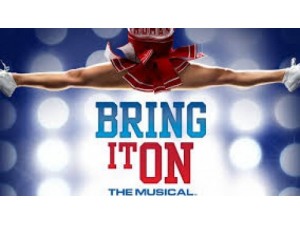 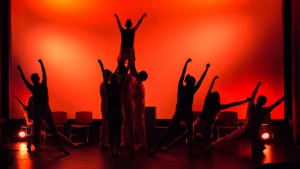 Sassy. Spirited. Strong. Words that not only describe the archetypal cheerleader persona but also are especially fitting of the recent production presented by Bridgeport’s The Bijou Theatre – the lively, high-energy cheerleading romp Bring It On. The musical, which first stomped, clapped, and shouted its way to the Atlanta stage in 2011 then went on to National Tours before hitting the Great White Way in 2012, was a collaboration by some of Broadway’s finest: music by Tom Kitt (Next to Normal, American Idiot) and Lin-Manuel Miranda (In the Heights, Hamilton); libretto by Jeff Whitty (Avenue Q); and lyrics by Amanda Green (Hands on a Hardbody). It is a rollicking ride rife with pretty girls, teen angst, social and race relations, and a bit of villainous mayhem.

As we’ve come to expect, The Bijou offers a variety of spectacular artistic and cultural offerings and Bring It On surely did not disappoint. Expertly directed and choreographed by husband-and-wife team Kirby and Beverly Ward and loosely based upon the 2000 film of the same name (which was written by Jessica Bendinger and directed by Peyton Reed), both stories follow two rival cheerleading squads, but there are few if any similarities beyond that. I’d seen the film some years ago and didn’t know what was in store – but in its reinspired form, was a buoyant and irresistible two hours on the boards, with not a dull moment from beginning to end. 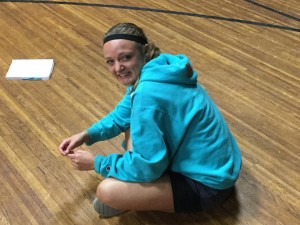 Soon-to-be senior Campbell Davis has been waiting to become cheer captain her whole life – and it looks like nothing will stand in the way of her dream. That is until a mysterious sequence of events rocks her world and not in a good way. When she’s abruptly redistricted from upper-class Truman High to inner-city Jackson High (where, oh, no! they don’t even have a cheer squad!); when her would-be successors, Skylar and Kylar, oddly both are unable fill her shoes as captain and the title then goes to shrill sophomore Eva; and finally when her boyfriend has eyes for another – it looks like it all just cannot be mere coincidence (is she crazy?). With no friends but the sweet, pudgy former school mascot Bridget (who also was redistricted), Campbell must navigate the not-so-welcoming halls of Jackson and find some good in all of the madness.

Playing upon some common character tropes, Bring It On brings important material to the story while doing so in a playful, hip, and engaging way with fun lyrics and colorful twists and turns (pun intended, after all it is a cheerleading story). And as high school is typically a time when adolescents are asking questions about who they are; what friendship and loyalty mean; and what are one’s personal goals and how to achieve them, so does Bring It On. 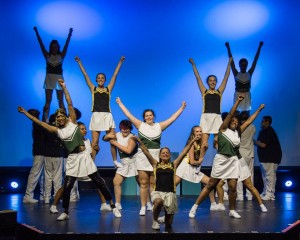 What makes this vibrant confection a stand-out is the brilliance of its cast – and I can say I was beyond impressed with the professionalism, poise, and precision of this youthful company. Shaylen Harger as the plucky Campbell was a dynamo – she acts with tremendous sincerity and is a gifted songbird whose notes soar above and beyond the girl-stacked cheer pyramids. The leader of the Jackson High dance crew, Danielle, played by Malia West, is tough as nails but loyal to a fault; and West not only has an incredible voice and stage presence, but the moves as well. Caitlin Brown as Bridget lights up the stage with her wonderful singing and self-effacing vulnerability, and she spreads heart and warmth through both the Truman and Jackson groups.

Randall, played by Ryan Shea, is spot-on as the cool guy who’s everybody’s friend and his chemistry with Harger is palpable. Alissa Grey is terrific as the sickeningly saccharin two-faced Eva. Rajane Katurah’s Nautica is a powerhouse, bringing this dynamic character to life. Ainsley Andrade is a treat as La Cienega, whom we’ve had the pleasure of seeing in two prior Bijou productions – One Flew Over The Cuckoo’s Nest and Take Me Out. He’s shown incredibly diverse acting ability, but in this, he can rock a wig and flashy costumes better than any drag queen I’ve seen. 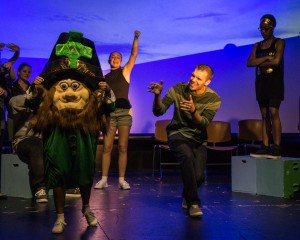 The bouncy duo Skylar and Kylar played by Liza Kottler and MacKenzie Wenzel respectively, were fabulous as the two stereotypically vain and shallow, back-biting mean girls. James Canal did a wonderful job as the obnoxious Steve (puppies, kitties, duckies, ponies, and all); and finally Cameron, played by Dhafir Jackson, and Twig, played by Lazarus Brown, were a humorous (and girl-crazy) complement to the principal bunch. With tremendous solos by Juan Ayala and Betzabeth Castro and a fantastic ensemble: Allison Genovese, Javon Graymon, Tiyon Hargrove, Grace Ludlow, Sarah Russo, Lauren Salatto-Roseny, and Jubilee White, the house shook with great enthusiasm and sentiment.

Shout-outs to musicians David Maiocco on piano (who also provided musical direction), Bill D’Andrea on keyboard, Doug Guidone on guitar, Dee Kay on bass, and Mike Bimonte on drums/percussion. The simple sets were finely supplemented with back screen projections. Kudos to Clarke Thornton for set design, Kyvon McCown for lighting design, Tori Schuchmann and Brendan McNamara for costume design, and James Ward for sound design. Of course all hands are needed to pull off a production like this, so final recognition also goes to Samantha Walsh as stage manager, Carol Anne Phillips as technical staff and assistant stage manager, and Eric Nesmith and Chris Diaz for follow spots (the cast utilizes the aisles, which I always love).

Bring it On is light-hearted fare with heart and a few life lessons tossed in for good measure. It seamlessly bridges song with dialog and keeps a pulsating pace that sends your spirits aloft like a squad of airborne cheerleaders. Congratulations to an incredible cast and crew for a job well done!

Okay, so you really want to see Hamilton, but can’t afford it, or can’t get tickets, or can’t get time off. Whatever the reason, do not completely despair. You can get the flavor of Hamilton by seeing The Bijou’s Bring It On: The Musical. Not only will you hear Lin-Manuel Miranda’s rapid-fire lyrics and hip musical rhythms reminiscent of Hamilton, but you will see an incredible show with some of the most talented young performers in Southern Connecticut.

I avoided seeing the movie Bring It On because I thought it was solely about a girls’ cheerleading team (I mean squad). Boy, was I wrong. The libretto written by Jeff Whitty, lyrics by Amanda Green and Lin-Manuel Miranda, and music by Tom Kitt & Lin-Manuel Miranda, is about so much more. It’s about fitting it, bullying, pursuing your passion, relationships. It’s about life. 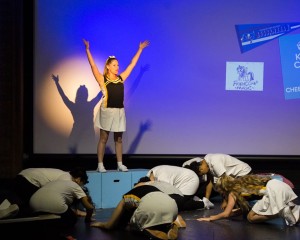 Everything about The Bijou’s production of Bring It On works – from the casting to set design, to staging and blocking. Veteran directors Beverly and Kirby Ward did a wonderful job directing and choreographing this multi-talented cast. The success lies in the fact that the themes and issues of the play (much like The Bijou’s prior productions of Take Me Out and One Flew Over The Cuckoo’s Nest) stay with you long after the play. Indeed, the best forms of entertainment are those that provide not only fun and enjoyment, but deliver thoughtful, insightful commentary about the human condition. I do not over exaggerate when I say that Bring It On is circumscribed within those parameters.

On a simplistic level, the plot is about the captain of a cheerleading squad getting redistricted to a school on the other side of the tracks and having to prove herself and the value of cheerleading to her new school and classmates. On a deeper level, it’s about friendship, loyalty, fighting for what you believe in and a host of other salient things.

Let’s start with how good the cast is. It should be noted that most of the cast members are young and are just beginning their journeys in the biz. To think they are starting out with this much talent already is mindboggling.

Shaylen Harger as Campbell, the cheerleading fish out of water, is fantastic. Not only can she act, sing, and dance, but she brings a real honesty to the role – which is what effective acting is all about. The same can be said of Malia West in the role of Danielle. She “brings it on” as the head of the dance team at Jackson High School who befriends the outsider Campbell despite her better judgment. Caitlyn Brown, a mere junior in high school, is simply wonderful as Bridget, the cheerleader wannabe who always ends up as the team mascot. She brings a real sensitivity and vulnerability to the role. In addition, she has excellent comic timing; her expressions and gestures are spot on. Her character is referred to at one point as having “junk in the trunk,” but in reality, the girl is filled with talent. Alissa Grey played the evil Eva to perfection, vacillating effortlessly between the sweet demure Eva to the sociopathic Eva. Ainsley Andrade, whom we loved in Take Me Out was knock down drag (pun intended) out great as La Cienega. Mr. Andrade, a relative newcomer to the boards, proved he can handle both dramas as well as musicals. Charismatic Ryan Shea as Randall adeptly played the bad boy who you can’t help but love. On the flip side, James Canal as Steve adeptly played the good boy who you can’t help but dislike. Talk about a character you dislike (in a good way), Liza Kottler was devilishly delightful as the vainglorious and egotistical Skylar.

Rounding out the remaining principals, both MacKenzie Wenzel (Kyler) and Rajane Katurah (Nautica) were dead-on as the supportive teammates to their respective cheerleading squads. Dhafir Jackson shined as Cameron, particularly in the musical number “Friday Night, Jackson.” He also displayed some great comic timing as did Lazarus Brown as Twig. 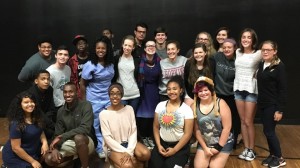 With a large cast, it is sometimes impossible to mention or comment upon everyone. As I’ve said in other reviews, sometimes the ensemble gets short changed. Yet, a cohesive ensemble is vital to the overall success of the play. For that reason nods have to be given to this highly talented ensemble including: Allison Genovese, Javon Graymon, Tiyon Hargrove, Grace Ludlow, Sarah Russo, Lauren Salatto-Roseny, and Jubilee Witte. Nods must also go to Juan Ayala for his solo in “Cross the Line” and Betzabeth Castro for her solo in “Legendary.”

The historic Bijou Theatre is indeed a treasure and special props must be given to Executive Producer Christine Brown for bringing great theatre like Bringing It On to our community.