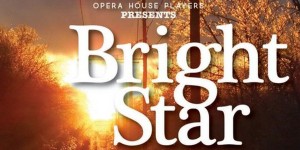 For more Information or to Order Tickets

Bright Star by the Opera House Players is a bright gem in theatre. One would think it would grace more stages since it was inspired by a true story with Music, Book & Lyrics by Steve Martin and Edie Brickell. While Pillow Talking found Steve Martin’s Meteor Shower intriguing, in my humble opinion, Bright Star far outshines it (pun intended). 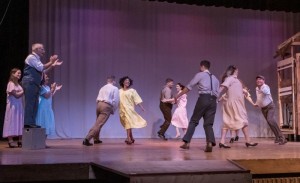 The Opera House Players’ rendition of it was in a word: stellar. John Pike did a fabulous job directing especially in view of the large cast and the plethora of movable parts including have the band on stage. Kudos to the team for bringing this production, as Mr. Pike says in his notes, “the very first non-professional production of Bright Star in the state of Connecticut.” With all due respect to Mr. Pike, I disagree – this production was every bit a professional one union affiliations or lack thereof not withstanding.

The play takes place in the post-World War II era with flashbacks to the 1920s. There is a fire in the belly of the main character Billy Cane charmingly and wonderfully played by actor Stephen Koehler. Every artist knows that passion – the need to create and have his or her voice heard. In Billy’s case, it’s writing. He vows to be a published author and leaves his hometown roots to follow his dream. While the story from there is fairly predictable, one must remember that this was inspired by a true story proving once again that truth is stranger than fiction. 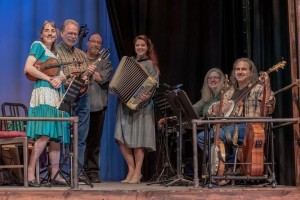 More kudos to Kim Aliczi (Music Director), Hannah Gundersheim (Choreographer) and an inspired musical score by Steve Martin and Edie Brickell. I absolutely loved the following musical numbers – “Bright Star,” “A Man’s Gotta Do,” and “I had a Vision.”

As Mr. Pike notes, Bright Star received “five (5) Tony nominations including, Best Book, Best Score and Best Musical” but was apparently outshined because of another Tony nominated show at the time – Hamilton.  I guess it’s true that timing is everything, in life and the theatre. That’s why you should see Bright Star by the Opera House Players while there is still time.

I’ve spent the greater part of the last four years dedicating much of my nearly nonexistent free time to theatre. This has included seeing theatrical productions both professional and community, reviewing the same, along with writing original stage plays with my husband/co-reviewer/creative partner, some of which we have produced and directed ourselves and others which we’ve begun to circulate. Have we become theatre snobs? No. More like theatre geeks, I’d say, and we’re lucky that as a couple, we share the same interests. We love everything from straight plays to musicals; dramas to comedies; new works to classics; and one-acts to those which are of the two-to-three-hour variety. The bottom line for both of us is, when it’s good, it’s good (and when it’s bad, well, it’s bad) – and we know what we like when we see it.

Some theatre snobs may try to tell you unless a show graces a stage along The Great White Way, it’s not worth seeing. Others may say you can venture Off-Broadway (albeit, still in NYC) and you may nevertheless catch a great production. And while my New Yorker husband might have concurred before we first ventured out as theatre reviewers, he’s not only a Connecticut theatre convert, he’s an avid fan. And that includes professional and community theatre.

Once in a while, a community theatre production comes along which really does rival that of professional theatre; when its casting, direction, set design, costume design, and other elements simply blow you away. Community theatre is also a pretty penny less than the cost of a Broadway or other professional theatre ticket. In fact, throw in dinner and you’ll likely still have money left for drinks and snacks at intermission! And possibly the best part? It allows you to support the arts in your very own backyard.

My long, slightly drawn-out intro now brings me to my point – Wayne and I recently had the pleasure of experiencing a production which we’d never seen nor heard about before. Bright Star, directed by John Pike and staged by the Opera House Players (OHP) at their temporary location in Enfield, CT (they are in the process of building their new “home”), is inspired by a true story with Music, Book, & Story by the one and only Steve Martin, and Music, Lyrics, & Story by the talented songbird, Edie Brickell. I have to say this production was one of the highlights of and a diversion from a very busy time for us; a reprieve from the craziness of a new school year for our children, a new semester for us teaching college, and all the other things that quickly fill up our schedules and calendars.

Bright Star is told at present and in flashback; we toggle between the years 1945/6 and 1923/4 with intersecting storylines: that of Alice Murphy, the no-nonsense The Asheville Southern Journal editor who plucks aspiring writer and former serviceman Billy Cane out of the slush pile and helps to hone and foster his love of the written word. Billy, who doesn’t yet realize he’s in love with his childhood friend Margo Crawford, moves from Hayes Creek to Asheville to pursue his career. We also learn of Alice’s tale of teenage love back in her hometown of Zebulon, NC. Young Alice, an eternal optimist and adventurous (as well as amorous) spirit, falls for the charming and wealthy Jimmy Ray Dobbs. Daddy and Mayor, Josiah Dobbs, doesn’t approve. Alice eventually moves to Asheville, leaving love along with the later revealed, painful past behind.

In spite of the fact that Bright Star was created, workshopped, and debuted in this decade, it has the distinct feel of musicals past, without the often protracted pacing which, as my husband likes to say, gives him hiney itch (his phrase for it’s too darn long!). It is buoyant and uplifting, even with the not so bright moments which threatened to drive many of the characters apart as well as break them down at various times in their life stories.

Director Pike, whose work we’ve had the pleasure of seeing before (he directed Is There Life After High School, by the Suffield Players and conducted numerous works at Connecticut Repertory Theatre, including 1776, Spamalot, Shrek, and How to Succeed in Business…), leads the multi-talented company through the proverbial dance with sensitivity and incredible attention to detail. His cast completely hits this one out of the park. Nicole Wadleigh as Alice is a gifted actress with a spectacular voice, believable as both the wide-eyed, optimistic 16-year-old and the worldly and melancholy 39-year-old. Andrew Rosenstein gives an exceptionally layered performance as Jimmy Ray, the man who is both passionate and has a deep moral core. Wadleigh and Rosenstein’s on-stage chemistry is palpable.

Stephen Koehler is an excellent Billy, the fresh-faced and eternally positive young writer. Jackie DeMaio as Billy’s friend and eventual love interest, Margo, is pure delight. Dennis Scott is great as the supportive Daddy Cane. Ryan Bird is wonderful as Daddy Murphy, the man who stumbles but eventually finds redemption; as is Robyn Scott as Mama Murphy, Alice’s loving mother. You know an actor is convincing when they rankle the best of us – Tim Reilly is the man you love to hate as Mayor Josiah Dobbs, the man with no moral conscience. Lindsay Ryan as Lucy Grant and Rodney K as Daryl Ames pull out a ton of laughs as Alice’s assistants and the Journal’s hilarious gatekeepers.

The entire cast is truly incredible, and no slight is intended in mentioning the rest in a condensed manner. Kudos to every one of them: Zach Bakken as Max; Maya Nicole Matthews as Florence; Erin Dugan as Edna; Colin Norris as Murphy Son; Frank Cannizzo as Stanford Adams and Stationmaster; Julianne Thouin, Erin Fields, and Khara Hoyer as “Asheville” Trio; Fredrick Goff as Dr. Norquist and Bartender; Jessica Glasser, Dugan, and KC Beauregard as Women at Train Station; Erin Maloney Nolin as County Clerk; Beauregard as Raleigh Woman; and Beauregard, Dugan, Fields, Glasser, Goff, Hoyer, Matthews, Nolin, Norris, and Thouin as Ensemble.

Major shout outs must also go to the Orchestra who appear on stage throughout and who at times, interact with the characters: Aaron Jackson, Bass; Ron Calabrese, Guitar/Mandolin; Tim Maynard, Banjo; Ann-Marie Messbauer, Fiddle; Kim Aliczi, Piano; and Beauregard, Accordion/Cajón.

The amazing production staff deserves nods themselves: Moonyean Field as Producer and Costume Designer; Aliczi as Music Director; Hannah Gundersheim as Choreographer; Jeff Clayton as Set Designer; Jerry Zalewski as Lighting Designer; Regina Diemand as Stage Manager; Joshua Hamre as Sound Designer; and the many, many others with hands in this delectable pie.

As a side note, I am admittedly writing this review on the last day of this show’s run. My husband’s review was posted in advance of mine, because if truth be told, I’ve been non-stop writing and editing one of our own works (in this instance, it’s not theatre!). Because the Opera House Players’ Bright Star is so very deserving of accolades, I wanted to make sure to deliver my own rave, even at the eleventh hour, if nothing more, to make it clear that you should find a way to see any and all of their future productions!