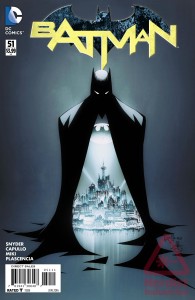 Finally a DC release worth reviewing! Batman #51 is bittersweet. Why? Well I’m glad you asked. The reason is, this is the final issue of one of the best Batman series in recent times. Yes, at some points they may not have used the wealth of characters and appeared to use the Joker as a crutch, but there were so many great aspects in the dim The New 52 series. It had great arcs (Court of Owls), the art was consistent, and it introduced many new aspects like Batman, Gordon, and new villains.

So in this issue, not much is left hanging as #51 goes full circle reverting back to #1. The villains are on the rebound after things looked so good for Batman before a mysterious blackout takes over the city. But, hey what kind of story would it be if all the villains are in Arkham Asylum? The impending rise of the villains just goes to show not only how much Batman is needed for Gotham but how Gotham is Batman.

The art once again by Capullo is a great feat of artistic ability that goes into comic book creation. His styling of Batman gives us the dark and crisp feeling bestowed upon the character. It also feels sort of like a throwback to previous era’s Batman titles due to its style. But most importantly, a smooth continuation between titles always will be remembered and that in a large part had to do with Capullo.

In a sense this is a good send off for The New 52 with Rebirth just around the corner. Yes, there is yet again another reboot of DC. Though, Rebirth seems to be off to a decent start tying in much more with Flashpoint. The creative team behind this great run unfortunately will be going their separate ways with Snyder taking over at the helm of All-Star Batman, though we may expect a collaboration between the two sometime down the road. Rebirth rolls out May 25, 2016.