If all the world’s a stage, and life a play upon it, then I’d have to conclude that all the theatre that my husband/co-reviewer and I see are like plays within the play of our entertainment-filled lives. No wonder it’s tough to wrap our heads around where one production ends and another begins! And while that type of literary device may not be one that’s used in this particular work of Shakespeare’s, As You Like It, which is currently on the stage of Connecticut Repertory Theatre (CRT), the infamous monologue I allude to, spoken by the melancholy character of Jacques in As You Like It, resonates as much today as in 1599 when The Bard wrote it. More accurately, it’s “All the world’s a stage, / And all the men and women merely players; / They have their exits and their entrances, / And one man in his time plays many parts, / His acts being seven ages…”

The bottom line is: I like it! I like it! (Actually, I loved it!) CRT’s As You Like It is a two-thumbs up and by all accounts, smashing success for me as well as what I clearly discerned from the audience’s rousing response. One of Shakespeare’s lighter works, this is a way to have your culture and understand it, too. Considered a romantic pastoral comedy (but by some naysayers, not up to par with many of his other, more complex pieces), it is light, fun, and altogether enjoyable. And in keeping with all their other productions, CRT executes it flawlessly under the direction of Kristin Wold. 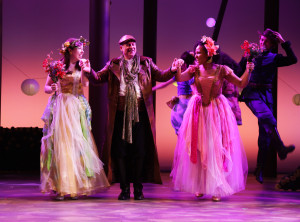 Steeped in the themes of love, family, and banishment, with hefty doses of gender bending and pure unadulterated folly, there is not only something for everyone, but something to which most of us may relate – don’t we all have those family members who drive us crazy? At the outset we meet the volatile Duke Frederick who lives with his only daughter, Celia, and his niece, Rosalind, whose father (his older brother), Duke Senior, he’d since banished from the kingdom. Rosalind, who has fallen in love with the handsome Orlando, has an argument with Duke Frederick who then banishes his niece; but because she and Rosalind are so close, Celia departs with her and the two take off for the Forest of Arden. In order to stay safe, Rosalind disguises herself as a man, Ganymede, and Celia as a shepherdess named Aliena – for “protection” they are escorted by Touchstone, a court jester.

Orlando, in a bitter feud with his own brother, Oliver, is forced to leave his home and also takes exile in Arden. He is accompanied by his old servant and friend Adam. The two troupes bumble around the forest meeting a multitude of colorful characters along the way; hilarity often ensues with countless twists and turns and a growing number of amusing love triangles. Yet despite the convoluted journey rife with disguise and deceit, diversion and delight, the enchanting story keeps you enraptured and wholly entertained. 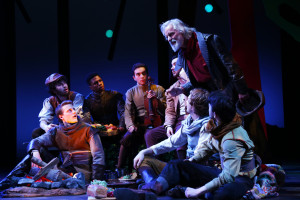 Jonathan Croy, John Hadden, and Sierra Kane take the helm as the seasoned Equity actors alongside UCONN’s theatre students. Croy as Duke Frederick and Duke Senior is phenomenal as he seamlessly slips back and forth between the punishing and malicious to the calm and compassionate siblings. Hadden is delightful as Jacques, Duke Senior’s loyal lord, the contemplative, brooding soul who seems to relish in his own (and others) unhappiness. Kane is terrific as the fickle Phebe, whose affections are comically turned in the wrong direction. Alex Campbell skillfully lights up the stage as the fiercely independent heroine, Rosalind; and Braley Degenhardt as Celia is phenomenal as her loving cousin. Nick Nudler as Orlando and Bryan Mittelstadt as Oliver completely deliver as the warring brothers. Nikolai Fernandez is sidesplitting as Touchstone and Matthew Antoci as Adam is warm and wonderful.

As for the rest of the exemplary cast, each contribute to the stellar whole: Valerie Badjan as Cora; Aaron Bantum as The Duke’s Lord/Page; Coleman Churchill as William/The Duke’s Lord; Zack Dictakis as Amiens; Jack Dillon as Hymen/Forester; Anthony Giovino as Charles/Forester; Sebastian Nagpal as Silvius; Gillian Pardi as Audrey; Elias Beck Sandlin as Dennis/Sir Oliver Mar-text; and Jacob Harris Wright as Le Beau/Page/Forester.

As You Like It is a lively, utterly engaging work you won’t just like, you’ll love just as I did!

All the world’s a stage and most of us are desperately unrehearsed.          – Sean O’Casey

Although historically the critics have vacillated on the overall merit of the play as compared to some of Shakespeare’s other works, it always has been my favorite for many reasons. Of course, one of the reasons is that there are so many famous passages that have become part of our daily lexicon. “All the world’s a stage” is probably one of the most famously quoted and paraphrased passages. Via simile and metaphors, it so accurately depicts the seven stages of life from birth to death. Indeed, they are rites of passage which, try as we might, we are nevertheless condemned by age and gravity to eventually experience. Then of course there’s the oft quoted, “too much of a good thing,” and my favorite, “The fool doth think he is wise, but the wise man knows himself to be a fool.”

There are many other important reasons why As you Like It is still relevant to today and Connecticut Repertory Theatre’s production has not only proved that to be the case in its recent adaptation, but has breathed new life into many parts with music, choreography, and wry satire that has made it a thoroughly engaging, enjoyable play – one which you do not need the Spark notes to understand.

The play revolves around two star-crossed lovers, Rosalind and Orlando who, like Romeo and Juliet, are forbidden to be with each other as a result of their feuding families. They end up meeting and interacting with a number of other characters in the Forest of Arden where gender roles are swapped, mistaken identities abound, and other farcical elements are employed until “all’s well that ends well,” (but that is another story).

Like many of Shakespeare’s plays, appearances can be deceiving and nothing is at it seems – whether it be characters, places, or motives. For example, the Forest of Arden is initially perceived as a dark, dangerous place where wild carnivorous beasts dwell and where evil lurks behind every tree. Of course, Arden turns out to be quite the opposite, a sanctuary and haven for the kind-hearted outcasts and stands in stark contrast to the “civilized” court where betrayal, unjust punishment, and other misdeeds are commonplace. Similarly, Rosalind, who dons as a disguise male clothing and a male persona is, as Casey Lambert, the Dramaturg, notes, “Shakespeare demonstrates the absurdity of social restrictions caused by gender stereotyping…. [and] by denying these gendered stereotypes [he] shows how we can live a more fulfilling life.” 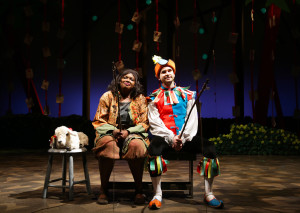 Kristin Wold did an excellent job directing and moving the story along at a lively pace. As noted above, the choreography and original music interludes (particularly in the opening scene) set the tone and verve for the rest of the play. There is no question that you will “like” (maybe even love) CRT’s As you Like It.