Pillow Talking’s Review of APPROPRIATE at the Westport Country Playhouse 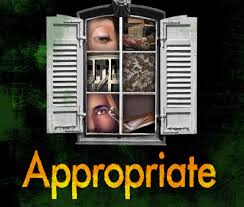 Blood may be thicker than water, but in many cases, water may be healthier.   — Michelle Parsons, author, blogger

Families – we all have them. Some we are born into, some we choose, and still others may simply come about by happenstance. For the lucky ones, they are loaded with love, affection, respect, and good times; for the less fortunate, they may be riddled with difficulty and anguish, distance and detachment. Sadly, when it’s shared genes, however, mere consanguinity just isn’t always enough; in fact it often makes us crazy when we look about in wonder as to how we possibly could be related to some people, or why we stick around when the proverbial ties that bind serve only to gouge us deeply and wound our souls.

These are just some of the matters which are at the crux of Branden Jacobs-Jenkins’ 2013 Appropriate, powerfully and hauntingly staged at Westport Country Playhouse and expertly directed by David Kennedy. Winner of the 2014-15 Obie Award for Best New American Play, it is a finely-crafted piece of theatre which explores the darker sides of family. After the death of the patriarch, squabbling siblings along with their partners and children reunite and discover more than just hoarded belongings in the cluttered mess of the southern estate. In fact, the disordered heap serves as a metaphor for the life and memories that no one can properly sort out. Describing it all as dysfunctional is in no way a strong enough word.

Dad died – six months before – and it’s time to move on. Returning to the long-faded Arkansas plantation like boxers to the ring are the Lafayette siblings who are richly-layered, mostly unlikeable, but at the same time people we with whom we may oddly and surprisingly identify: Toni, a fabulously kvetching Betsy Aidem who is both imposing and insecure at the same time and always just about to boil over; Bo who is maybe the most level-headed of the bunch, authentically played by David Aaron Baker, displays his own share of insecurities and is wound so tight you can see the veins pulsing at his temples. Long-lost little brother and perpetual screw-up is Frank, er, Franz, brilliantly portrayed by Shawn Fagan. He comes to the homestead armed with a whole long-winded, pre-written spiel in an attempt to explain away his youthful issues with drugs and other shameful mistakes to his still-condemning sibs.

Along for the ride but far from in the background also are Bo’s wife, the defensive Rachael, a spot-on portrayal by Diane Davis; along with the couple’s sassy daughter, Cassie, and energetic son, Ainsley, wonderfully portrayed by Allison Winn and Christian Michael Camporin, respectively. Toni’s son and yet another major screw-up, Rhys, is played by the talented Nick Selting. And finally, Franz’s much younger girlfriend, the kooky, new age, psychobabbling River is played by an exceptional Anna Crivelli. 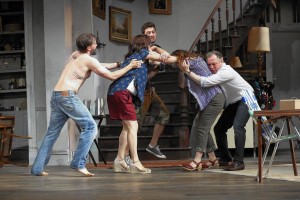 Everyone ultimately is assembled at the plantation and before long, an unknown and ne’er before divulged history of slavery, racism, antisemitism, and more spew forth and take hold of the pack with the grip of a vice. This mesmerizing tale isn’t a horror story per se, yet secrets are exhumed like bodies from a graveyard. It should come as no surprise that there are actual cemeteries on the grounds of the estate or that photos of dead African Americans along with some unidentifiable, fermented items are found in a box full of sealed jars. Skeletons are hurled from the closets and uninvited ghosts of the past hover and hang like unwelcome cobwebs overhead. But it’s not just the specters which are disturbing, because from the get go, the family members stir things up, relentlessly pushing, or perhaps punching one another’s buttons. You’re hard-pressed not to see something of your own family dramas in the melee, but at the same time, hopefully for most of us, you’ll remain in your ivory tower, happy that their problems are far uglier than yours.

The dialog is crisp, the acting is top-notch, and the direction serves to effortlessly bring together all of the elements of Jacobs-Jenkins sordid family drama. Jacobs-Jenkins, a young playwright, earned a MacArthur Fellowship for his works. The foundation said of Jacobs-Jenkins, “Many of Jacobs-Jenkins’s plays use a historical lens to satirize and comment on modern culture, particularly the ways in which race and class are negotiated in both private and public settings.” Appropriate is undoubtedly one such work and one in which he also acknowledges has been influenced by notable playwrights who’ve come before him, including overtones of Sam Shepard, Tracy Letts, or Arthur Miller to name just a few.

Appropriate is one that will stay with you long after you’ve departed the theatre. Unafraid to delve into the often unattractive depths of history and humanity, Jacobs-Jenkins weaves an alarming, thought-provoking, and eerily provocative yarn and Westport Country Playhouse is just the theatre to have given it such formidable legs.

The word “appropriate” can be used as an adjective or verb. The following are its abridged definitions depending on its use in context.

suitable or proper in the circumstances.

Mark Twain is credited to saying that “[t]he difference between the almost right word and the right word is really a large matter—’tis the difference between the lightning-bug and the lightning.” With respect to the word “appropriate,” it may indeed be the “right” word under Twain’s definition, but still mean vastly different things depending upon how it is used as a participle of speech.

Such is the case with Branden Jacobs-Jenkins’ play at Westport Country Playhouse. David Kennedy has directed a nuanced, multi-layered examination of a family in conflict. It is a place where appearances may be deceiving and where you sometimes can judge a book by its cover. In many ways, it is not merely the study of a dysfunctional extended family, but rather it is the coming of age story of an entire family. It would be impossible to have any sort of critical discussion of the play or the performance without giving away some details of the plot. Hence, you have just received my rather inartful disclaimer of a spoiler alert coming. 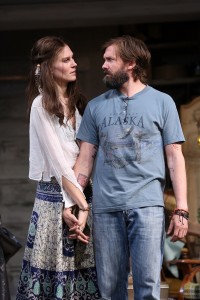 The play is about a southern extended family from southeast Arkansas, whose ancestry was firmly rooted in the days of plantation owners and slavery. Indeed, southeast Arkansas was the hub of burgeoning slavery where, at the time, cotton could only be harvested via manual labor. (Interestingly, no surname is ever given to the family). The unsurnamed family gathers together shortly after the patriarch’s death for the auction of the family house (which at one point in time was a thriving plantation). Toni is the loyal, steadfast Daddy’s girl who, much like Scarlett O’Hara, draws her strength from the house and the land. Her brother Bo, an admitted Mama’s boy, is the now presumptive head of the family with a perfect wife, Rachael (even though she is Jewish), and rampant son named Ainsley. The couple also has a precocious ‘tween daughter named Cassie. Toni and Bo, the two main siblings, are joined by their long-lost brother, Franz (who was once Frank) and his new-age girlfriend (who is probably half his age), River. Toni also has a teen son named Rhys. Most of the family, with the exception of Toni, did not live at the house on a regular basis and rarely visited.

The last character is the house itself, which has as much presence as the flesh-and-blood characters. Sandwiched between a white, historic family cemetery and an unmarked slave cemetery, it is filled with ghosts and secrets of the past. As the play progresses, we get to know some of its secrets and discover why it is haunted by the spirits of the past. Apart from the obvious, that the house was the site of a prosperous cotton plantation complete with slaves, some hidden truths are revealed like the fact that the patriarch of the family may not have fallen too far from the tree. The discovery of a book of photos of dead African Americans, among other things, point to a very sordid past.

Compelling theatre occurs when every aspect, every, facet, every motif are seamlessly tied together in a unified whole like a painting on a canvass. Lighting design by Matthew Richardson was exceptional, with many of the scenes alternating between the light of day and candlelight at night, highlighting the black-white, dark-light themes. Even the loud and annoying sound of the cicadas in between acts added to the play’s overall intensity (thank you, Fitz Patton, for sound design). 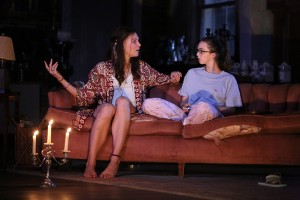 Even the names of the acts were significant: Act One – The Book of Revelations; Act Two – Walpurgisnacht; and Act Three – The Book of Genesis. What’s even more interesting is the named order of the acts. The play begins with The Book of Revelations which is at the end of the Bible and ends on The Book of Genesis which opens the Bible. It is up to the audience as to the actual significance of the reverse chronological order, but it may just be that we are now at the beginning of the end of our society. Meanwhile, Act Two – Walpugisnacht (which occurs mostly by candlelight) sandwiched between the two biblical references is a German holiday that has been associated with witches and pagan rituals.

There is no doubt that Appropriate is the type of rich, ambiguous, and symbolic play which is haunting in its aftermath. It stays with you, nibbling at your subconscious, teasing you to unlock its mysteries and secrets.