Pillow Talking’s Review of AND THEN THERE WERE NONE…

all photos by Stephen Cihanek

We take in a lot of theatre here at Pillow Talking and for the most part they are straight dramatic plays, plays with comedic elements, or they are musicals (all of which I happen to love). But when we had the opportunity to mix it up a bit and see the iconic Agatha Christie’s 1943 whodunit And Then There Were None directed by Kate Valiska at The Brookfield Theatre for the Arts (TBTA), I was excited for a madcap night of murder, mayhem, and mystery. 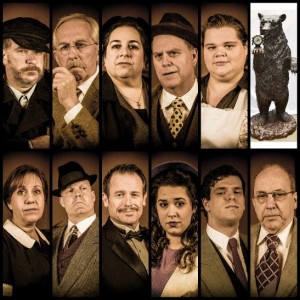 TBTA did not disappoint, keeping true to the infamous Ms. Christie’s convoluted but charming script (at least one of the numerous versions which strayed from the original book). When the play opens we meet 10 visitors who have been lured to an island for reasons initially unbeknownst to them – some believe it is an invitation for work; others are there for pleasure or to reconnect with old friends. It turns out that someone (Was it the host? One among them?) knew of their involvement/guilt in a past murder and sought to hold them accountable for their actions, even though the law had not. The plot twists and contorts, forcing the audience’s own finger-pointing and loyalty to shift from character to character. As the guests die one-by-one according to a framed nursery rhyme above the mantle (accompanied by the one-by-one disappearance of the ten soldiers below it), no one feels safe.

After the group arrives, ferried there by Fred Narracott (Rick Haylon), a pre-recorded message plays detailing the guilt of each party – it is discovered that house servant Miss Rogers, well played by young Nicole Veach, has put a record on the gramophone at her boss’s request, yet she has never met her employer, Mr. Owens, or his wife, Mrs. Owens. Her actions are immediately questioned by the others. Miss Rogers and her mother, Mrs. Rogers (local theatre veteran Barbara Disraeli), insist that they were just following orders. 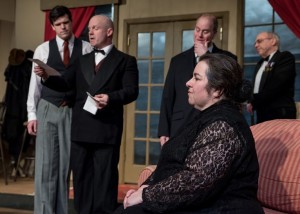 Justice Lawrence Wargrave played by Daniel Patterson had quite a presence as the intelligent and authoritative leader of the group who is attempting to sift through the clues to figure out what they all are truly doing on the island and what they need to do to remain safe. Soon rich playboy Anthony Marston (expertly played by Karl Hinger) dies from a poisoned drink and the whole bunch is in a tizzy. When Vera Claythorne (Alexis Willoughby is wonderful), a former governess who flip-flops from being too cool on the surface to a bit hysterical, notices the nursery rhyme, it become clear that each will eventually die – as the unknown mastermind seeks vengeance for their past actions. She soon finds comfort in the arms of Philip Lombard (Anthony Contento is the dashing leading man), a former African mercenary. 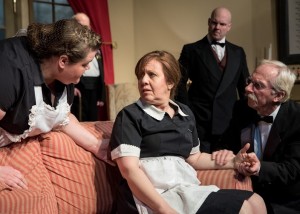 The cast is rounded out by Dr. Edward Armstrong; Ron Malyszka is excellent as the timid ex-alcoholic who once operated while drunk and killed a patient; William Henry Blore, played by Ted Schwartz who is the perfectly hard to read former police inspector who believed he was brought to the island to watch over everyone; Barbara Kessler is well cast as Emily Brent, the righteous and often off-putting guest; and the oldest of the guilt-ridden troupe, General MacKenzie, is played by Jeff Rossman who has taken to the boards following a long career in health care.

Valiska did an incredible job staging this complex, big cast production while the ghost of Ms. Christie most certainly was looking on. The delightful set, created by Andrew Okell and Robert Lane, and costume and hair by Marian Miller, Bill Possidento, and Beverly Regan lent the requisite period realism to the 1940s story. Kudos to producers Kristin Hoose and Brian Casella for bringing a fun and light piece of stage work to Brookfield! 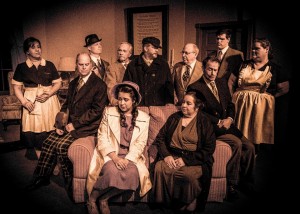 There’s a British invasion going on in Connecticut and I am not talking about a musical one, although it is related to the arts. First, The Ridgefield Theater Barn decides to do Educating Rita, a two-person, one-setting British drama fraught with Downton Abbey-esque nuances and humor. Hartford Stage chooses Shakespeare’s classic Romeo & Juliet. And now The Brookfield Theatre for the Arts decides to do Agatha Christie’s And Then There Were None, a ten-character murder mystery that is so difficult to stage that even when Christie was alive (after she adapted the play from her own bestselling novel) had a difficult time getting it launched.

The director, Kate Valiska, and producers Brian Casella and Kristin Hoose should be commended just for picking such a difficult piece. Fortunately, The Brookfield Theatre for the Arts’ production of And Then There Were None is engaging and enjoyable in its own right. 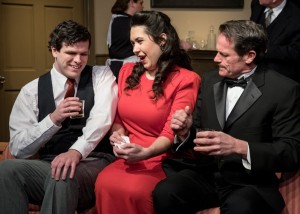 And Then There Were None (sans Christie’s usual hero, Hercule Poirot) is her all-time bestselling novel. Without giving away too much (as the entire play hinges on an eleventh-hour plot twist) it should be noted that the project has three different endings in three different mediums: one ending in the novel version; a different ending in the play version (which Agatha Christie re-wrote herself); and another alternative ending in the television and film versions. One of my favorite adaptations was the 1965 film version titled Ten Little Indians starring an all-star cast at the time: Hugh O’Brian, Shirley Eaton, Wilfrid Hyde-White, Fabian (yes, the singing heart throb of the late 50s and early 60s) and an uncredited voice over by Christopher Lee.

All three mediums have the same basic plot: a group of ten individuals are invited to an isolated island by a mysterious benefactor named U. N. Owen for what they perceive to be an enjoyable getaway. All of the invitees have a dark spot in their past which involves the death of another as a direct result of their own actions. One-by-one, the invitees are killed off pursuant to the nursery rhyme Ten Little Indians. If they are the only individuals on the island, who is the murderer? 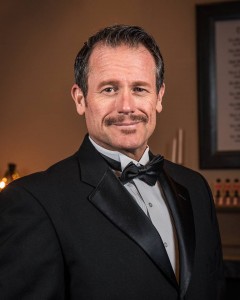 Kate Valiska capably directs her ten actors to the final denouement. In some cases the English accents are good, in others they are spotty and in some cases even non-existent. Nevertheless, the acting is consistently good by the ensemble. Experienced stage and film actor and singer Anthony Contento plays the adventurer and hero, Philip Lombard, with gusto. He is perfectly matched by Alexis Willoughby who plays the strong, independent heroine, Vera Claythorne. A refreshing surprise was the vibrant performance handed in by newcomer to the boards, Nicole Veach. Her mother, Mrs. Rogers, played by veteran actress Barbara Disraeli also was notable. The Fabian rebel-without-a-cause character, Anthony Marston, was adeptly played by Karl Hinger. A younger but authoritative portrayal of Justice Lawrence Wargrave was turned in by Daniel Patterson. Props as well to the rest of the strong ensemble cast, Ted Schwartz as the wiley William Henry Blore, Barbara Kessler as Emily Brent, the Madame Defarge-like character knitting in the face of death; Ron Malyszka as the Dr. Phil-like anxiety guru, Dr. Edward Armstrong; Jeff Rossman as the retired General MacKenzie; and Rick Hayden as Fred Narracott.

Not to be a gore-whore, but way too much of the action, including most of the murders, happen off-stage and are related via exposition. But this is a fault of the original play, and not this production.  Overall, a satisfying mystery well executed. Thank you Brookfield Theatre of the Arts for keeping classics like Agatha Christie’s And Then There Were None alive and well (pun intended).