Pillow Talking’s Review of AN AMERICAN IN PARIS 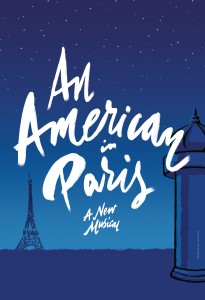 I want to be an American in Paris. Maybe putting it out there into the universe will make it happen. I’ve never been to France, but I’ve dreamt of it and hope to plan a visit someday soon. I did, however, have the opportunity to experience a slice of the beauty and culture of the City of Lights recently at Westchester Broadway Theatre’s incredible production of An American in Paris and I suppose that will have to suffice for the time being.

Of course, the dazzling, romance- and dance-filled musical isn’t exactly how I imagine my trip to Paris to be. I’m not looking for love (I already have it!); I can’t dance, or at least not like that. And it is, after all, 2019 not 1945, a time when the world was just barely out of the shadows of the Second World War. But, growing up in a dance family – my parents were both professional dancers and performers – I appreciate the beauty and graceful expression of stories told through movement. In An American in Paris, there is often action without the need for words. If you love dance, then this is the show for you. 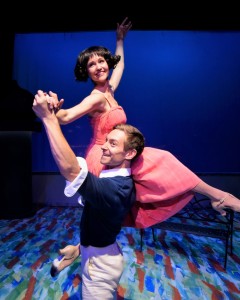 An American in Paris is a story about discovering one’s self and all that life has to offer. Jerry Mulligan is a young American Army Lieutenant who, by happenstance, discovers the (wholly unavailable) girl of his dreams when he purposely misses his train home. He has decided to stay on in Paris and pursue his love for painting. He’s abruptly thunderstruck, beguiled by the mysterious Lise Dassin, a beautiful French ballet dancer. Unbeknownst to Jerry, he’s not her only suitor, as his new friend Adam Hochberg, a fellow American veteran and piano composer, has also fallen hard for her. But that’s not all – Henri Baurel, a wealthy businessman and wannabe nightclub entertainer, has plans to propose to Lise. It’s quite the love quadrangle.

Along the way, Jerry meets brazen American heiress Milo Davenport, who has set her mind to groom his artistic aspirations and soon she falls for him. Does that now define a love pentagon? Henri’s parents, Madame and Monsieur Baurel have much to say about the events about to ensue. What follows is gloriously set to the grace of the dance and the exceptional music of George and Ira Gershwin (book is by Craig Lucas).

Brandon Haagenson as Jerry is as charming and charismatic as he is an incredible dancer. His chemistry with the enchanting and ethereal Deanna Doyle as Lise is palpable. Doyle toggles well between her character’s passion and guardedness. Haagenson also plays off Tommaso Antico’s Adam as if the two are long-lost brothers. Jonathan Young is terrific as Henri, a man who hasn’t yet figured out who he is and what he wants, a future perhaps foreclosed upon by his overbearing parents. Erika Amato as Madame and Ian Knauer as Monsieur are spot-on. Rounding out the featured cast are Kent Zimmerman as Mr. Z, the choreographer, and Leisa Mather as Olga, the dance teacher.

An American in Paris is a feel-good production with incredible songs that will be on repeat in your head for weeks to come. This is one you won’t want to miss!

If and when I ever get around to writing my memoirs, Confessions of a Culture Vulture, I would be remiss, if not downright disingenuous, not to note that my two shortcomings have been ballet and opera. Yes, I have seen several versions of The Nutcracker around the holidays. And yes, I have seen operatic scenes in The Phantom of the Opera and in Pretty Woman. But surely they do not equal the many hundreds of films, plays, and other art forms that I have been fortunate to experience in my life.

That said, I must confess that I can watch Gene Kelly in Brigadoon all day, every day. His grace and movement while dancing, for me at least, are unmatched. Plus, he was a hell of an actor (his performance in Inherit the Wind is brilliant).

An American in Paris, The Musical, was based on (or rather inspired by) it the 1951 film of the same name. The cinematic version was directed by Vincent Minelli, with music and lyrics by George and Ira Gershwin, and starred Gene Kelly, who also did all the choreography. The musical also features music and lyrics by Ira and George Gershwin with a book by Craig Lucas.

Westchester Broadway Theatre’s (WBT) production of An American in Paris is a deliberate throw back (as well as an homage) to 40s and 50s musicals, where song and dance were as much as part of telling the story as the dialogue and the acting. Gene Kelly’s ghostly thumbprints are all over WBT’s show which was beautifully directed and choreographed by Richard Stafford. Even the lead actor wears the same style of clothing that Gene Kelly wore in the film.

The show is about an American expatriate who stays in Paris after World War II to focus on his talent for drawing and art. He falls in love. Without giving too much away, the boy gets the girl, loses the girl but somehow things get resolved and as Shakespeare said, “All’s well that ends well.” Like the 1951 film, it is not the predictable ending that makes this story memorable and engaging, but rather the journey itself through music and especially dance. Indeed, the choreography of the show is as much a part of telling and underscoring the action of the play as any of the characters. 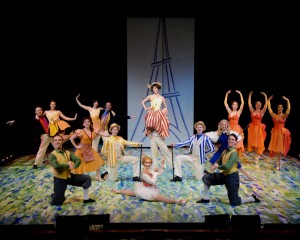 There is no doubt that the success of play hangs on a cast which must be all triple threats. WBT is fortunate to have such a talented and versatile company. Both Brandon Haagenson (Jerry) and his love interest Deanna Doyle (Lise) exude a real chemistry, but one which is just as palpable in their dancing as in their acting on stage. Lauren Sprague is thoroughly engaging as Milo as she must balance art and her romantic feelings for Jerry. Erika Amato (Madame Baurel) and Ian Knauer (Monsieur Baurel) show their acting chops in two of the largest roles with just dialogue. There also is a great comic subplot with Tommaso Antico (Adam) and Jonathan Young (Henri) involving Henri’s desire to be a nightclub performer.

I should really cut and paste the following line in every musical I experience at WBT, and just the change the names, and that is: a show like this NEEDS an incredibly versatile ensemble. Once again, WBT has lucked out in tapping the talent pool. Kudos to this great Ensemble: Rachel Beiswenger, Danielle Behrens, Joseph Cullinane, Jaime Foord, Rachael Britton Hart, Tim Fuchs, Leeds Hill, Katy Kauffman, Ryan Lambert, Garrett Marks, Leisa Mather, Rebecca Shulla, Collin Sanderson, Charity Van Tassel, Kate Wesler and Kent Zimmerman. And a special shout out to the unsung heroes of every show, the non-perfoming swings, Georgina Moore and Joey Simon.

WBT’s An American in Paris is a feel-good, engaging, entertaining show which harkens back to the flavor, tone and glitz of yesteryear’s studio musicals. The great thing about the show, however, is that it is timeless in its execution and both old and new culture vultures will love it.