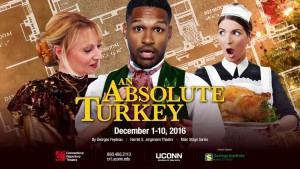 Like some enormously challenging brainteaser, An Absolute Turkey will send your feathers into a tailspin while your head nearly explodes as you attempt to keep up with the fast-paced, ever-changing, twisting and turning plotline of this high-energy, consummately classic farce. With a brilliantly colorful cast of bumbling and wholly shameless characters, stalking, sex, betrayal, sex, vengeance (and did I say sex?) are on the menu for two-and-a-half uproarious hours of bed-hopping bedlam. And while it may be tempting, just be sure to stay away from the strychnine!

As the second mainstage production of Connecticut Repertory Theatre’s (CRT) 2016-17 season, French “master of farce” Georges Feydeau’s An Absolute Turkey brings levity and lasciviousness to the holidays. Disclaimer: no actual turkeys were seen, harmed, or eaten in the production. Translated from the original 1896 French play Le Dindon (which means young male turkey), the husband-and-wife team of Sir Peter Hall and Nicki Frei crafted the hilarious hijinks which saw its world premiere in London in 1993. Set in early 20th Century Paris, An Absolute Turkey trots its way down the wacky, randy path of love, marriage, and (in)fidelity. 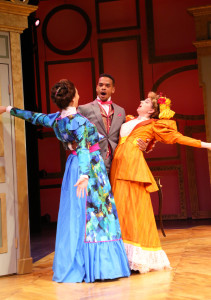 Done in three acts (with two intermissions), the story begins when a libidinous, preening fellow named Pontagnac unknowingly follows a beautiful woman around the city; he’s shocked and bewildered when the jig is finally up and he discovers she’s actually his old pal Vatelin’s wife, Lucienne. Lucienne is put off (or acts as if she is), but is intrigued nonetheless. She acknowledges that if she can catch her own husband in an extra-marital dalliance, she, too can engage in some well-justified naughty business of her own. But Pontagnac isn’t her only suitor – shallow bachelor Redillon is all too quick to man up as well. And before you know it, with breakneck speed, multiple other couples enter and exit, who also are ripe for the coupling and recoupling – and it matters not if it’s with their own spouse or someone else (including a young, pimple-necked bell hop whose come down with a case of puberty).

With sure-handed leadership and skillful guidance by visiting director (and lauded actor) Paul Mullins, this wacky, spot-on company will keep you laughing until your sides ache, while they’re in and out of doors and beds, finding themselves in the most improbable and stickiest of predicaments. Natalia Cuevas delivers a stellar performance as the pampered wife, Lucienne, to the hapless Vatelin – an excellent Jeff DeSisto. Bryce Wood is wonderful as the sex-crazed Pontagnac (and he’s got the perfect ’do for the role). Brooks Brantley is hysterically funny as the cad Redillon and a terrific physical actor to boot (wait until you see his abs). 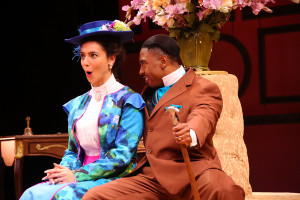 As I watched the performance all I could think as a playwright myself, is while he was penning his book, how did Feydeau keep track of all of the characters, intersecting plots and subplots, and straight-up zaniness? If I were to have to provide a full synopsis here (which I would not do, due to spoilers), I don’t think I could! Suffice it to say, in addition to the above character and plot mentions, there’s everything from a sex-crazed Swiss honey named Mitzi (a terrific Arlene Bozich) and her over-the-top husband Soldignac (a fabulous Curtis Longfellow); to a hopelessly hearing impaired wife, Clara (Carly Polistina); to luggage mix-ups, mistaken identity, and several truly fine choreographed scene changes handled impeccably by some well-appointed hotel staff led by the hotel manager (a notably wonderful performance by Michael Bobenhausen). And I would be totally remiss not to mention the outstanding John Leonard Thompson who played scene-stealing Gerome, the loyal yet snarky and voyeuristic butler to the womanizing (and ultimately worn out) Redillon.

Final thanks to Michael Bradford, artistic director, and Matthew J. Pugliese, managing director, for presenting this divine and delectable feast of fun – like a five-star meal, An Absolute Turkey is not to be missed!

Farce is tragedy played at a thousand revolutions per minute.  – John Mortimer

Connecticut Repertory Theatre (CRT)’s An Absolute Turkey is absolute fun and a pure joy to experience! Farce is a distinct form of theatre which, like other forms – tragedy, for example – may not be everyone’s cup of tea. A good farce is over-the-top, exaggerated, at times confusing and absurd, chaotic, but, above all, hysterically funny. In today’s parlance, a farce would be a play filled with jumping the shark moments. CRT’s An Absolute Turkey fits neatly within all of the aforementioned parameters.

Georges Feydeau is a French, early twentieth-century playwright known primarily for his farces (he wrote over sixty plays) His 1896 Le Dindon (“The Turkey” or literally “Sauce for the Goose”) was adapted for the stage by Nicki Frei and Peter Hall and has found a new life in regional theatre. An Absolute Turkey, as it is now called, has found its way to CRT where it is gobbling up one laugh after another.

It would take a GPS programmed for navigating theatrical plot summaries to succinctly try and chart out the story structure. Suffice it to note that in most good farces, there are colorful characters, complex situations, multiple subplots, coincidences, absurdity, and complete randomness. If it helps at all, Feydeau came out of the Belle Époque era which, as dramaturgs Angelique Bacha and Elizabeth Mangan explain in the program, was an historical period “ripe with feelings” stemming from “sexual mores, socialism, the need to elude ugly parts of modern life through frivolity, infidelity as a normal occurrence, and a bit of post-impressionist art.”

An Absolute Turkey takes place in three acts and in three different settings. While the same actors populate all three acts (with the majority appearing during the second act), in many ways each act was a play onto itself. I couldn’t help but think of Neil Simon’s Plaza Suite.

The play was brilliantly directed by veteran stage actor and director Paul Mullins, whose sterling list of theatre credits encompasses everything from Shakespeare to Noises Off. He amassed an incredibly talented cast and did an excellent job of updating, blocking, and staging a complex play dependent on quick-witted repartee, inimitable comic timing, and energetic physical comedy. Indeed, at one point during Act II, there was so much side-splitting, well-choreographed action occurring on stage, that it was positively Chaplinesque. 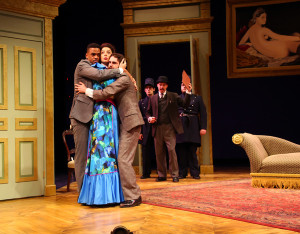 As a director and professor myself, I always am amazed at the eclectic and seamless integration of talent (both in front of and behind the curtain) that goes into a CRT production including undergraduates, MFA students, alumni, and professional Equity actors and stage managers. The cast is far too large to cite aspects of each individual performance, but it should be noted that there is not one weak link in the batch. For a farce to truly work, timing is critical and that means the cast must work in perfect sync to pull it off. The cast of An Absolute Turkey, under Mr. Mullins’ expert direction, makes it look like child’s play. Kudos to Natalia Cuevas (Lucienne), Bryce Wood (Pontagnac), Jeff DeSisto (Vatelin), Darren Lee Brown (Jean, Hotel, Guest, Inspector), Brooks Brantly (Redillon), Jenn Sapozhnikov (Madame Pontagnac), Arlene Bozich (Mitzi), Curtis Longfellow (Soldignac), Meredith Saran (Armandine), Ben Senkowski (Victor), Carly Polistina (Clara), Emile Saba (Pinchard), Michael Bobenhausen (Hotel Manager), Scott Redmond (Hotel Guest, Second Inspector), Shavana Clarke (Hotel Guest), Sarah Jensen (Hotel Guest), Mikaila Baca-Dorion (Hotel Guest), Max Helfand (Hotel Guest, Policeman) and Kent Coleman (Hotel Guest Policeman).

While the entire cast was spot-on, a special shout out needs to go veteran performer John Leonard Thompson who stole just about every scene he was in. It’s not every actor that can make dragging a bag of potatoes across the stage uproariously funny. (You’ll just have to see the play to get it.)

As always, thanks to the great administrative staff for bringing these excellent theatre works to our community including artistic director Michael Bradford and managing director, Matthew J. Pugliese.

So don’t be an absolute turkey this holiday season – go to CRT and enjoy an evening of laughter and fun watching its production of Georges Feydeau’s An Absolute Turkey.