Someday Productions LLC and Pillow Talking are pleased to present the following Guest Review of AMERICAN SON at the Barrington Stage Company, MA by Jarice Hansom 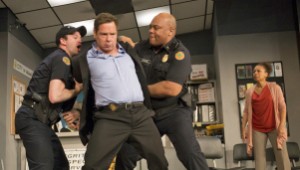 The premise of the new American play, American Son, is ripped from the headlines of the Black Lives Matter movement. In this 85-minute pressure cooker commissioned by Barrington Stage Company, author Christopher Demos-Brown presents a compressed version of what happens when a biracial teen seems to have gone missing in Miami. Set in a police station, Jamal’s mother and father confront cultural expectations and the breakup of their marriage while trying to learn where their son might be. The story unfolds as a clock on the wall keeps time, adding to the building stress into the wee hours of the morning.

Skillfully setting a pace that continues to accelerate throughout the play, Tamara Tunie (as Kendra Ellis) knows how to inject the right amount of energy while police execute their “normal” procedures. Tunie is well-known to television viewers of Law & Order: Special Victims Unit as the controlled Dr. Melinda Warner, but on stage she is a fireball of

emotions as the mother of the missing teen. She gives a first-rate performance, loaded with emotional depth and courage. She is well-matched with Michael Hayden as Scott Ellis, the husband from whom she is separated and who explodes with repressed anger as information is leaked about the possibility of what might have happened to his son he refers to as “J.” The police officers are well-played by Luke Smith as Officer Paul Larkin, the Caucasian rookie who stumbles while trying to do what he thinks is the right thing; and Andre Ware as Lieutenant John Stokes, an African-American senior officer with a physically imposing stature who insists upon going by the book.

Director Julianne Boyd has given us a multi-layered production that forces the audience to examine their own beliefs about culture and race. The play covers many issues and is largely successful. We never really understand, however, why the parents remained married for 17 years, despite their cultural differences and society’s expectations. Still, American Son packs a wallop; it gives you plenty to think about and creates a deeply moving family portrait.

Originally Published In The Spotlight