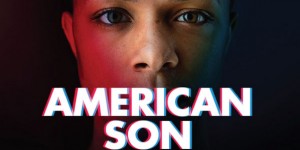 I know I’ve seen good theater when I constantly mull over the themes, plot, and characters for days afterwards. I know I’ve seen great theatre when I walk out of a play and say to myself, “Damn, I wish I’d written that.” That is exactly how I felt after I left TheaterWorks Hartford having seen its version of American Son. The play is simple in elegance – its themes, plot, number of characters, staging – and yet so layered and complex in its study of interpersonal relationships and societal norms.

Any review can give the basics: what the play is about, was the acting and direction good or bad, and whether it is worth the ticket price. A play like American Son needs more than the basics – something which many pundits today argue that society is sadly lacking – critical thinking. Certainly, SparkNotes would help. The point is, this piece must be examined and mined for all its worth; i.e., all the nuances and ancillary issues which the play raises.

Indeed, the play is an intelligently stimulating, thought-provoking piece. But it also is a gut-wrenching thriller.

In American Son, there is a vehicle incident involving Jamal, a teen on the brink of adulthood. His mother is black and newly separated from her white husband; however, it is clear both are loving and caring parents. The two end up at the police station wanting to know what has happened to their son. Like the television show 24, we are given a real-time view (the play is 90 minutes without an intermission) into the unfolding of the details of the incident and the status of Jamal. Obviously, we would be naïve to think that racism does not rear its ugly head and is one of the major themes of the play. The play, however, is about so much more – literally a panoply of opposites and their interactions. Not to give away too much away, but in addition to racism and the struggle for personal identity, the play deals with parenting, marriage, separation and divorce, police brutality, costly mistakes in judgment, first impressions, human error, egocentrism, and just about every human emotion under the sun.

The play also deals with our personal rights as human beings and the concomitant civil liberties which we should enjoy like our First Amendment right to free speech and free expression. How much can a government infringe on our personal rights in the name of security, protocol, and “official” rules? Indeed, watching the tortured parents in the play hitting one brick wall after another when it comes to finding out about what happened to their son, I was reminded of the Kafkaesque nightmare of The Trial. 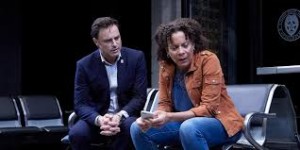 The performances are stunningly authentic. Ami Brabson as Jamal’s mother, Kendra Ellis-Connor, gives a deeply moving portrayal. While the character could have been played as a one-note, screaming hysterical parent, she carefully crafts a multidimensional performance where we see both a mix of strength and vulnerability. J. Anthony Crane as Jamal’s father, Scott Connor, is wonderful as the perceived patriarch and oft-times macho leader of the clan, only to fall victim to the very system he is a product of as an FBI agent. I was so impressed with John Ford-Dunker’s portrayal of the newbie police officer Paul Larkin, that I was sure he must have been the one who gave me my last traffic ticket. Finally, if there is a moral core to the play it is in the guise of the character, Lieutenant John Stokes, played flawlessly by Michael Genet. Although there was no Jamal character seen in the play, his presence was certainly felt – and it is no accident that the program and the posters for the piece feature the face of a young man.

Kudos must be given to Christopher Demos-Brown for writing such a great play and to Rob Ruggiero for bringing it to life with his usual remarkable vision and verve.

It’s interesting to note that during the same week we saw TheaterWorks’ version, we were invited to a special Screen Actors Guild screening of Netflix’s version of American Son directed by Kenny Leon. Unfortunately, we could not make the screening – and maybe that was a good thing since my first impression of the piece will always be the masterful production by TheaterWorks.

Under the dark veil that lies somewhere between midnight and dawn, when both parents and their children should be tucked snug beneath the covers, a mother’s worst nightmare is realized. In Christopher Demos-Brown’s searing drama American Son, black mother Kendra Ellis-Connor’s 18-year-old son, Jamal, is not only not in his bed, he’s missing. Alone, she alternately paces and pleads with the bare bones overnight crew in a somber, hollow South Florida police station. No one is forthcoming with information and it’s not entirely clear whether they have it or are just holding back.

This isn’t a typical missing person’s case. Jamal hasn’t been gone for weeks nor even days. It’s been a mere few hours since Kendra’s heard from him following a traffic incident; however, to a mother, even moments of not knowing her child’s whereabouts, whether he’s two and hiding under a department store clothing rack or it’s 16 years later and he’s not answering his cell phone, those minutes drag on interminably.

It is evolution or perhaps biological determinism that hard-wires the mom brain to move at warp speed and subsequently, to also imagine every worst-case scenario; low-level maternal worry turns quickly to anxiety then to full-blown, torturous panic. Add to that, the seemingly less-tortured, possibly even detached, male brain – in this case, make that three of them – a situation further augmented by heaping doses of prejudice, ignorance, and countless bald assumptions. It’s a toxic and tormenting combination for Kendra who cannot make herself heard, despite the myriad words which come tumbling from her lips. Thwarted by a racist rookie cop, an absent lieutenant, and her oft-clueless estranged husband, not a one appears to comprehend the depths of her fears.

Kendra teeters on the edge, ready to explode. She eventually does, albeit with the somewhat tempered restraint of an intelligent, educated psychologist. But it’s more the color her skin than what she says that rankles the rookie and she knows it. In fact, it’s the color of everyone’s skin that continually creates friction.

It is evident subtlety was not a consideration for Demos-Brown in American Son. His characters and dialogue are, to a degree, stereotypical, and always in-your-face. Nor was subtlety the chosen path for TheaterWorks’ Producing Artistic Director, Rob Ruggiero, who led the powerful piece. An ever-intensifying tempest brews inside the police station which mirrors the storm that rages outside. And the incredible performance by Ami Brabson as Kendra, which both begins and ends at meteoric proportions, will completely level you. Her mounting anguish is palpable; something which pierced every fiber of this mother-of-four’s being. 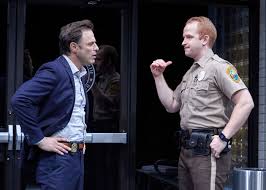 Late-comer to the party that no one wanted to attend is a spot-on J. Anthony Crane as Scott Connor, Kendra’s husband and Jamal’s father. He is at first a cool and collected suit who attempts to pacify his wife: “I think you’re assuming the worst, when the truth be told, the current situation is probably a whole ‘nother thing,” he blathers, while he also tries to maintain an air of authority and calm with his police brethren. Scott is a white FBI agent who we learn has recently walked out on his family – on Kendra he clarifies – but we find he’s more than a bit clueless about race as well as who his biracial son actually is. Before long, as with Kendra, his attempts at self-control falter as the men in blue continue withhold information from them.

John Ford-Dunker is the surly, but wet-behind-the-ears, and very white Officer Paul Larkin whose racist remarks spill all too effortlessly from his mouth. He quickly finds himself in over his head both with Kendra and with Scott, and he struggles to sidestep the landmines until the cavalry arrives. Last on the scene is Michael Genet as the well-seasoned, black Lieutenant John Stokes who endeavors to bring balance to the situation, but at times still exacerbates and intensifies the difficult and distressing dynamic.

Brian Prather’s set design is the perfect complement to the stage action, as is Matthew Richards’ lighting design, and Frederick Kennedy’s sound design. Shout-outs also to Herin Kaputkin for costume design and Michael Rossmy for fight direction. The intimacy of TheaterWorks (noting also the newly designed space and comfy seats!) is the perfect setting for this type of work. It makes the action and intense emotion truly inescapable.

Theatre is a medium that doesn’t have to apologize for extreme, powerful, and often loud storytelling. American Son is all that. It makes you uncomfortable. It makes you angry. And that’s exactly what it’s supposed to do.