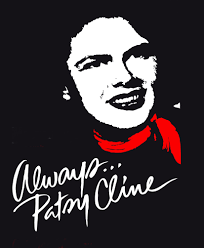 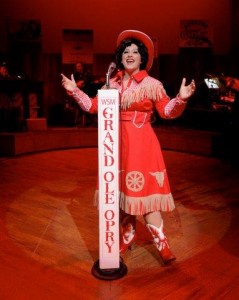 All photos by John Vecchiolla

Don’t let the title fool you. You don’t have to be a Patsy Cline fan to enjoy Westchester Broadway Theatre’s production of Always…Patsy Cline. Nor do you have to be a country music fan. Even though Patsy Cline was a bit before my time, I was and still am a huge Elvis fan and, consequently, I am familiar with his late 50s/early 60s contemporaries like Jerry Lee Lewis, Carl Lee Perkins, and Patsy Cline among others. And I also enjoy country music. But even if you take away those two facts, I still would have enjoyed WBT’s Always. The show was a pure delight!

The play was created and originally directed by Ted Swindley and was based on a true story. It centers on a Patsy Cline fan who, through dogged persistence, a bit of luck, and timing not only gets to meet her idol, but develops a relationship via letters and phone calls until Patsy’s untimely death at age 30 in a multiple-fatality plane crash. Patsy Cline is considered a pioneer in the country music field especially vis-à-vis female solo artists in that genre.

The part of Louise, the fan, is deliciously portrayed by veteran Broadway actress Susann Fletcher. Ms. Fletcher is 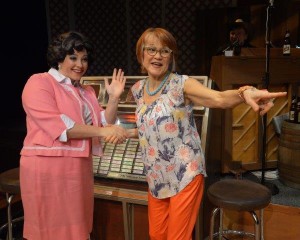 absolutely, positively knock-down-drag-out awesome in the role. Any future versions I may see of the show will forever be tainted by her stellar performance. The true mark of a great actor rests in his or her ability to convey truth. Ms. Fletcher had me believing she was a southern Patsy Cline fanatic. She was funny, poignant, and vulnerable. Patsy Cline played by Erin McCracken also was phenomenal in the role, belting out one song after another amidst costume changes galore. I am not a music connoisseur by any means, but her voice was perfect with just the right mix of vibrato and country twang that Patsy Cline exhibited. She also was a darn fine actress.

While most of the focus is on the two main actors, a special shout out must go to The Bodacious Bobcat Band and the individual members listed below who serve as more than musical accompaniment and are, in fact, supporting actors to the action happening center stage. The band consists of Ken Lundie (musical director/piano), Ken Ross (drums); Geoff Marrow (bass) Guy Fischetti (steel guitar/fiddle).

The show was superbly directed by Amiee Turner (who is the Producing Artistic Director for the Ocean State Theatre Company where she had the opportunity to direct Erin McCracken as Patsy Cline in a 2014 version).

And did I mention the audience participation part of the show? Definitely an added bonus – even when Ms. Fletcher picked me randomly out of the audience, gripped me by the shoulders and asked my wife/writing partner, “Is this your second husband? He wouldn’t be my first choice either.”

WBT’s show is a limited run, so you should make room in your schedule now to go and see it!

In today’s world of Internet and social media fandom, it takes only a simple click to find your favorite superstar – to see them, to know where they are, to hear about what they are doing, and even to “follow” them. But whether it’s today, or 1961, it is the stuff of dreams for a fan to actually meet the superstar they idolize, to see them in person, or possibly to speak to them. 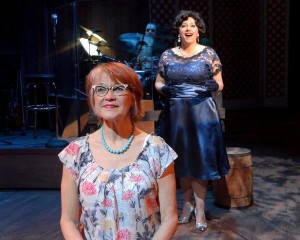 For Houston housewife Louise Seger, this was a dream which became a reality. Seger had heard Cline on the Arthur Godfrey show one morning in 1957 when her children were watching TV and immediately was hooked, going so far as to make regular phone calls to her local radio station to ensure she heard the sweet songbird’s music each day. Some years later she was thrilled to learn that Cline was coming to town, and she made sure she was at the honky tonk plenty early – and to her surprise and elation, she bumped right into her idol who was hanging out before her performance. An immediate friendship was born between the two women.

Always…Patsy Cline, created by Ted Swindley and based upon a true story, is a heartfelt glimpse into the life and tragic loss of country’s iconic star. Erin McCracken as Cline is as authentic as it gets. She channels the beauty with her crisp, clear, and twangy vocals, bringing both power and tenderness to a multitude of Cline’s hits. It is no wonder that McCracken has an impressive resume with countless musical theatre credits to her name.

But this performance was a smash due to the sensational talents of Susann Fletcher, who as Seger, was 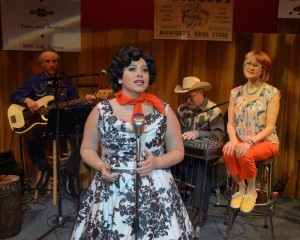 unabashedly genuine and warm, and staggeringly brilliant in both her dialogue and her physical comedy. What a boon to WBT to have this amazing Broadway veteran and multi-hyphenate grace their stage – she also is a writer of stage and screenplays. In no uncertain terms, she was pure joy to watch.

One felt in seeing the relationship build between Cline and Seger, that they might truly have been peering through a window into the life of these two women; women separated only by the hazy invention of stardom, yet in actuality, separated by nothing of significance. Told mainly through Seger’s point-of-view narration and Cline’s songs, this incredible story and the exchanges between the women both were incredibly believable and moving. Cline and Seger commiserated about everything from marriage and kids to ironing clothes and life in general.

What also added to the fun were the shout-outs to the audience throughout the performance. One not only felt as if they were at one of Cline’s shows, but also a part of the duo’s conversations. But what might have been most engaging was when Seger hoofed it into the audience more than once – first throwing a barb at my husband (read his review to find out what she did – it was rather amusing!) and second, to pick out and dance with a fine, well-dressed gentleman. 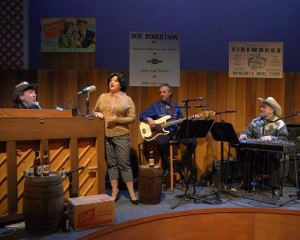 The “Bodacious Bobcat Band” – Ken Lundie as musical director and on piano, Ken Ross on drums, Geoff Marrow on bass, and Guy Fischetti on steel guitar and fiddle were the perfect complement to the production with not only live musical accompaniment throughout but also some comedic barbs and exchanges with the leads.

Amiee Turner provided wonderful direction for this cast of two whose exceptional presence loomed larger. The simple set at the hands of designer Steve Loftus, gave plenty of room for the stars to shine while making great use of WBT’s moveable stage pieces. Costume designer Heidi Giarlo brought the early 1960s to the present with a host of stunning costume changes for Cline. Kudos also to Andrew Gmoser for lighting and Jonathan Hatton and Mark Zuckerman for sound design.

Sadly, Always…Patsy Cline has a limited run, closing on February 28, 2016. This is definitely a must-see so don’t wait!