Pillow Talking’s Review of A ROOM OF MY OWN 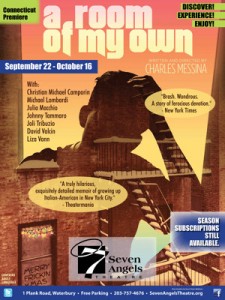 You can choose your friends but you sho’ can’t choose your family, an’ they’re still kin to you no matter whether you acknowledge ’em or not, and it makes you look right silly when you don’t.

– Harper Lee, To Kill a Mockingbird

Family: a basic social unit comprised of individuals who are tied together through a common biological, legal, cultural, and emotional history. But what does such a definition really tell us? The words are vague and ambiguous in that they say nothing about the complexity of family function or the dynamics among its members. Is there a typical, traditional family? Is there any such thing as a normal family? A healthy family? Playwright Charles Messina explores these and many other questions about family in his new work A Room of My Own, an ex post facto contemplation about his own life, his relations, and all of their wild eccentricities. And it all boils down to one blazing hot mess – a wildly funny, provocative look at the trials and tribulations of a working-class Italian-American family who all but kill each other as they breathe the same stale air inside a tiny, five-floor walk-up in Greenwich Village during the Christmas of 1979. 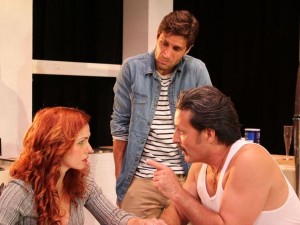 Families are the most powerful system to which a person may belong and the relationships (even the dysfunctional ones) often are inextricable. That being said, each member also has his or her own distinct, idiosyncratic viewpoint. A Room of My Own is cheekily told from the perspective of a grown-up Carl Morelli (a spot-on performance by the often overwrought, emotionally spent Michael Lombardi), a writer who narrates not only from the periphery as he bangs at his laptop keys, but also from within, as he at times inserts himself into the daily interactions of his outrageous family and even converses with his ten-year-old self. Carl’s parents, Dotty and Peter, his sister, Jeannie, and his Uncle Jackie provide very colorful material for his life’s story – although as he toils away on these daft memoirs, there are some moments in which he wishes (and even tries) to hit the DELETE button.

At the outset we learn that four hot-headed, strong-minded, highly opinionated people, each of whom has a very loud and unique personality, share a dilapidated mish-mosh of a one-room studio – right there we know there’s bound to be trouble, right? Mom (the feisty and divine Joli Tribuzio), a gambler and a thief with a mouth that’d make a trucker blush, brings home the meager bacon (and pastries from work) and rules the proverbial roost. She’s brazen, she’s shameless, and also thinks nothing of pilfering a few extra bucks from the cash register at the bakery or lifting electronics from Crazy Eddie’s. Unemployed Dad (a fantastic, funny Johnny Tammaro) has abundant flatulence and a heart condition to boot, but he makes up for it with some mean homemade meatballs (which he does right on stage)! He and Tribuzio delight with their snarky, stinging, raucous banter and have wonderful stage chemistry as the oft-sparring couple. Jeannie (Julia Macchio, the talented daughter of actor Ralph Macchio who originated the role of adult Carl at Abingdon Theatre Company) is all sorts of teen angsty, snarky, and surly; and young Carl (the gifted young Christian Michael Camporin) is just a plain old a wise-ass, a cover-up for a stomach that’s in knots over his flawed and f**d up family. Enter larger-than-life Uncle Jackie (a riotously comical David Valcin), a gay man who rocks a fishnet shirt and booty shorts like nobody’s business during a very un-gay era; he’s got something to say to and about everyone, including his punk rock music-loving, transvestite neighbor. Finally we briefly meet Aunt Jean (a very memorable Liza Vann), Peter’s estranged sister who’s been harboring a family secret for some time.

A Room of My Own is yet another new work presented at Seven Angels Theatre in Waterbury by artistic director Semina De Laurentis. It is refreshing, it is bold, and it is just plain funny. Kudos to Brian Dudkiewicz for scenic design, who did an incredible job creating the tenement anyone would wish not to inhabit and Catherine Siracusa for costumes perfectly evoking time and place. Shout-outs also to Matt Guminski for lighting, Matt Martin for sound design and engineering, Daniel Husvar for props/scenic painting, and to production stage manager Elizabeth Salisch, assistant stage manager Meg Dowling, technical director Brandon Cook, and master electrician Stephanie Gordner. 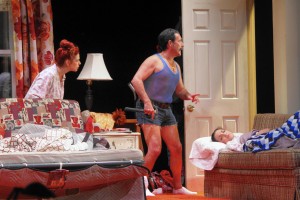 It’s all very uncouth, it’s far from P.C., and if you’re offended by four-letter words, beware. But what it also is, is authentic (and thank goodness there’s no smell-o-vision). A Room of My Own is about a family whose bonds are unbreakable – a family who accepts one another despite all of their faults. It dives underneath and removes the shroud of perfection many choose to project in the public sphere. In the seventies (or eighties or nineties for that matter) there was no Facebook or other Photoshopped, faux collages of the flawless family. Messina brings this realism to the present – but also chooses to find humor in the blemishes, humanity in the shortcomings, love in the defects. And he does so with wry wit and even a bit of wisdom. Messina acknowledges that it’s at least partly autobiographical – but whether you’re Italian-American, a child of the seventies, or your family ain’t even near to perfect, you may just see a bit of yourself or your own relatives in some of the characters – and for sure, it’s bound to make you laugh until your sides ache!

There are certain things – eccentricities? Idiosyncracies? Perhaps nuances for lack of a better word – that you experience growing up in a first-generation, heavily-rooted ethnic group or culture. I know. My mother was Italian and she was one of nine children, so the extended Italian enclave with all of its trappings was interwoven in my upbringing – fish on Christmas Eve, turkey on Christmas Day, pasta with sauce (not gravy) every Sunday, listening to Jerry Vale and Al Martino, and countless other things. It is impossible not to come away from it all with deep-seated memories.

Writer and director Charles Messina expertly captures the quintessence of an Italian family in the seventies in the new play A Room of My Own presented by Seven Angels. It is rich in detail, imagery, and nostalgia. But it also is a layered coming-of-age story, as the author himself expresses, “a bittersweet journey back home to revisit a childhood filled with struggle and strife, laughs and love.”

The play is narrated and hosted by Carl Morelli, a writer penning his memoir of growing up in this crazy, at times dysfunctional, and at other times completely over-the-top (but in a good way) working class family in a tenement in Greenwich Village in 1979. It is a slice of life to be sure – a snapshot of life for this family at the end of disco era, but before AIDS and Reagan’s eighties. Carl’s family consists of his mother, Dotty, his father, Peter, his sister, Jeannie, his Uncle Jackie and his Aunt Jean. There is also a younger, alter ego-version of himself, Little Carl. The story revolves around Christmas and the end of a decade and, to an extent, the lifestyle of the seventies.

The laughs are plentiful and hearty, but there also is an underlying poignancy beneath the comic mantle that hits home to so many of us who have gone through similar rites of passage. Maybe my family was not as dysfunctional as the Morellis, but I could certainly relate to some of the trials and tribulations growing up in that period. 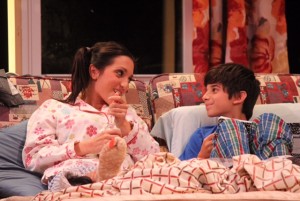 Madone, as my Mom used to say – the cast was terrific. Johnny Tammaro was spot-on as Peter Morelli, the father and patriarch. He had great timing and an excellent comedic sensibility. Joli Tribuzio played the perfect foil as Dotty Morelli. Ms. Tribuzio portrayed that diverse range between an overprotective lioness guarding her family and cubs to an out-an-out – well, you know what I mean. I met many a Dotty growing up in Yonkers, NY. David Valcin was MasterCard priceless as the eccentric, gay Uncle Jackie – a cross between Danny Aiello and Harvey Fierstein. Julia Macchio brought just the right mix of sass, sex, and sarcasm to the role of Jeannie Morelli. Liza Vann had a commanding presence in the small, but significant part of Aunt Jean.

Finally, special shout-outs must go to the performances of Michael Lombardi and Christian Michael Camporin as, respectively, Adult Carl and Little Carl. The device of the communication between Adult Carl and his younger alter ego, Little Carl is a conceit used to good effect by the playwright in getting to moral core of Carl. Both actors are perfectly in synch with each other and their tête-à-tête is fascinating to watch.

Overall, A Room of My Own is an engaging, absorbing and thoroughly entertaining piece of theatre. Kudos to Semina De Laurentis and Seven Angels Theatre for bringing this excellent work to our area.