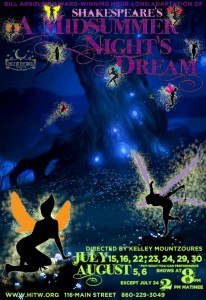 Philosopher and psychoanalyst Erich Fromm said, “We all dream; we do not understand our dreams, yet we act as if nothing strange goes on in our sleep minds, strange at least by comparison with the logical, purposeful doings of our minds when we are awake.” Strangely peculiar are the events of Shakespeare’s A Midsummer Night’s Dream. Magical and mysterious; enchanting, and enthralling. But theatre like dreams, we accept unconditionally – despite the often farfetched implausibility of the stories that unfold.

I’m going to steal my husband’s oft-used phrase – I, like he, am a culture-vulture. It is one of the many things we share and theatre is among our pleasurable co-pursuits and has been since we began dating. I have favorite genres; however, I’m always game for just about anything on the boards. And I’m also a hopeless romantic (as is he) so what better way to combine these passions than with a play about love – albeit a humorous one, because frankly, we all could use some lighthearted, escapist entertainment in our lives. As one of Shakespeare’s most popular works, A Midsummer Night’s Dream at the Hole in the Wall Theater (HITW) in New Britain, CT serves up pure confectionary delight. 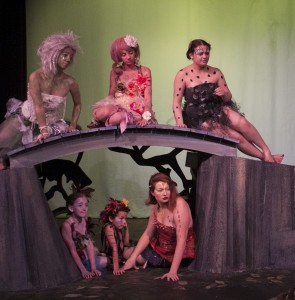 I believe I was in elementary or middle school the first and only time I saw it, so I remember little about the three-dimensional version (having had to read it much later in high school). But under the capable direction of Kelley Mountzoures Midsummer is a vibrant, whimsical few hours filled with mischievous dancing fairies, royal weddings, terrible actors (I should clarify: excellent actors who play terrible ones!), mistaken identity, confused lovers, and raucous peculiarities, all layered in the poetic language of the Bard. In a magical and enrapturing setting we’re taken on a journey that feels like one that only can happen in a dream, of course!

When young Athenians Lysander (Stephen Lenczewski) and Demetrius (Paolo Celetano) vie for the love of the same girl, sweet Hermia (Kristen Parker), the shrill and frustrated Helena (Remony Perlman) is beside herself, because she’s in mad love with Demetrius. They flee to the woods to escape arranged marriage and a duo of demanding dads. It becomes all comic madness and mayhem from there when a rascal fairy named Puck (HITW has cast a wonderfully animated, playful trickster in Neo Valentin) is instructed by the fairy king Oberon (a charismatic Tony Palmieri who also produced) to properly match the pairs with a magic love potion from a flower known as “love-in-idleness” – intended to make Demetrius reciprocate Helena’s love. But when Puck mistakes Lysander for Demetrius, he puts the juice in the wrong eyes, instead making Lysander fall in love with Helena. The fabulously funny foursome stumble and race about the woods, completely unaware of the impish fairies’ interference.

And that’s not the only meddling that takes place. Oberon, who is frustrated with his wife Titania (Anne Collin is the embodiment of a pixie), also has instructed Puck to put the same potion in Titania’s eyes to bring shame to her for disobedience to her husband – by making her fall in love with a woodland creature. And she does, with an ass (a “mechanical” named Nick Bottom, played to the hilt by Peter Bailey); a man who has been transformed with the head and hands of a donkey.

And just who are these “r 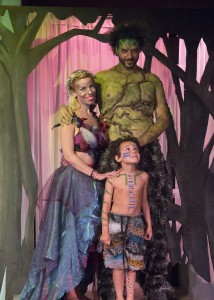 ude mechanicals” as they are called? Bumbling laborers who are to put on a play for the upcoming nuptials of Theseus (George Dagon as the dignified Duke) and Hippolyta (Christina Gianelli is a terrific Amazon queen). Snug (Jeremiah Rhodes is a hysterical Lion), Snout (Scott Hoffman tears it up as the sidesplittingly funny Wall), Starveling (Steven Siermiatkoski as the dim, lantern-toting Moonshine), and Flute (Adam Cormier whom we loved in HITW’s Still Life with Iris, as the utterly ridonkulous Thisby) are ineptly directed by Peter Quince (Johnny Peifer is wonderful) and the overly dramatic Bottom (Bailey as the hilariously love-struck Pyramus) but their play, which proves to be a poorly staged flop, is instead seen as a comedy by the royals.

The mystical creatures of the wood, the fairies, make magic throughout the production – Delaney Wilbur as First Fairy (and dance captain), Peyton Stehle as Peaseblossom, Eden Beaudoin as Cobweb, Raechel Johnsky as Moth, Kristen Bennett as Mustardseed, Raven Bohmier as Titania’s Retinue, and Matthew Horowitz, Brittany Virginia Greene and Elizabeth Hill as Oberon’s Retinue, and finally Jacob Diaz Mountzoures as the Changeling Boy. And supporting characters, Erin Jolicouer as Egeus and Tim Adams as Philostrate also are wonderful.

In addition to the stellar cast and spot-on direction by Kelly Mountzoures, there was terrific choreography by Rebecca Meakin and excellent original music composition by Bill Arnold (who also provided technical direction). The fanciful yet simple set and scenic design was flawlessly executed by Peggy Messerschmidt (I especially loved the slide and would have loved to have taken a ride down it on my way out!), lighting by Dawn Alguard, and sound by Bill Arnold, which all was boldly accented by dynamic costuming – kudos to Kate Bunce and assistant Remony Perlman, as well as extraordinary makeup by Mountzoures and wigs by Adam Cormier. Shout-outs to the entire rest of the crew for their plentiful contributions.

This was a show to which we were fortunate to take several of our children, as we always are eager to expose them to a variety of cultural offerings. It was well-executed, delightful entertainment, and right in our own backyard. I highly recommend that you head to Hole in the Wall and catch the magic yourself!

What fools these mortals be  – Puck, A Midsummer Night’s Dream

Today Shakespeare comes in many forms and varieties. There’s traditional, neo-classical, avant-garde, and countless other genres. Shakespeare has been retooled, updated, and re-worked so many times that if the works were not in the public domain, William Shakespeare would be richer than Donald Trump and Bill Gates combined.

So it is always with great anticipation that I see a Shakespeare play today to see how the director and cast will make the Bard’s works relevant to our time. I remember in my younger days of cultural vulturism, I would read the entire play before seeing it (as well as the Monarch Notes or CliffsNotes – I’ve dated myself) and then be ready to comprehend and enjoy the visual presentation.

I am thrilled today that  with Hole In The Wall Theater’s (HITW) production of A Midsummer Night’s Dream, one does not need today’s SparkNotes, a Shakespearian translator, or any other aids to fully enjoy the play. Indeed, Director Kelly Mountzoures has made one of Shakespeare’s most delightful plays palatable to all ages via the acting choices and the staging. 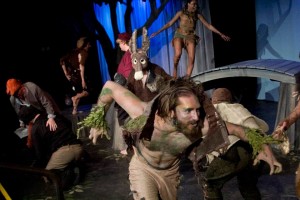 There are four storylines that all come together at the end. There is the marriage of Theseus, the Duke of Athens, to Hippolyta, and it is at the marriage feast where all plot lines ultimately converge. There is a troupe of actors who want to rehearse a play to present at the wedding. Four star crossed lovers – or maybe not so star-crossed muddy up the works: Hermia loves Lysander even though her father, Egeus, wants her to marry Demetrius who Hermia’s friend, Helena, desires. You got that? It’s a Shakespearean Bob and Carol and Ted and Alice. Most of the action takes place in the forest outside of the Kingdom which is controlled by magical fairies. It seems Oberon, the King of the fairies is having some marital problems with his queen, Titania, over custody of a changeling. These four separate story lines collide with both comedic and farcical results.

While I am usually a smiler and maybe an occasional chuckler, I had real guffaws and belly laughs at HITW’s production and it was due to the wonderful casting and direction. I am happy that HITW never followed W.C. Field’s famous advice about never working with children or animals. HITW pulled off Still Life with Iris with a gaggle of talented children and they’ve done it again here. Neo Valentin, a mere junior in high school, was MasterCard priceless in the pivotal role of Puck. He was adorable, impish, charming, and engaging. He had great comedic timing and knows how to milk and audience for additional laughs. It’s mind boggling to think that if he is this good now, what will he be like a few years from now?

And speaking of comic timing, many a belly laugh came from watching the antics of the four lovers: Stephen Lenczewski (Lysander), Paolo Celentano (Demetrius), Kristen Parker (Hermia), and Remony Perlman (Helena). Their love rhombus reminded me of the classic comedy film, One Night in the Tropics. Tony Palmieri as Oberon had great stage presence (enhanced by some wild body make-up) tempered with an underlying insouciant demeanor that made his character both delightful and devilish. Anne Collin as Titania is the perfect foil to both Mr. Palmieri’s Oberon character and Nick Bottom’s character so adeptly played by Peter Bailey.

Other standouts included the power couple, Hippolyta and Theseus, Duke of Athens, played respectively by Christina Giannelli and George Dagon. Ms. Giannelli gave a particularly nuanced performance as the so-not-in-love with her husband-to-be. Her eye-rolling, head-shaking disapproval and obvious disgust when Theseus touched her were spot-on. Adam Cormier, who Pillow Talking enjoyed in Still Life with Iris was knock-down draaaaggggg-out (pun intended) hilarious as Flute. A special shout-out also goes to six-year-old Jacob Diaz Mountzoures as the scene stealing Changeling Boy.

Final shout outs go to the Director Kelley Mountzoures for her direction and her make-up design – the detailing was awesome. And Stacey Pelton for her fine work as Stage Manager and for having a really cool Shakespearean bio!

With such a large cast, it’s not possible to comment on everyone’s performance. Suffice to say that the entire cast worked seamlessly together to make HITW’s production a success.

All ages will enjoy HITW’s A Midsummer’s Night Dream. It’s a great way to spend a midsummer night.