Someday Productions LLC and Pillow Talking are pleased to present the following review of A CHRISTMAS CAROL: A GHOST STORY OF CHRISTMAS at Hartford Stage 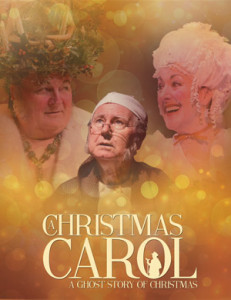 For information about upcoming shows

As chief cook and bottle washer, which includes editing both Wayne’s and my own reviews and blog posts, I will state unequivocally that Wayne and I did NOT read one another’s reviews prior to writing our own.

At what point is something deemed a holiday “tradition”? After two years? Five years? Maybe ten? As a kid, every year come December our family did much of the usual: we decorated the Christmas tree and we put up lights outside the house; we baked Christmas cookies and visited with extended family; my siblings and I wore special holiday pajamas on Christmas Eve and then we sat by the fireplace with my father to hear him read ‘Twas the Night Before Christmas (A Visit from St. Nicholas) right before we went off to bed. And sometimes we even dashed outside and scouted across the sky in search of Rudolph’s red nose and Santa’s jingling sleigh. It was cozy and familiar and fantastic; and it all added to the excitement of the season.

But now I’m an adult who’s established some of my own traditions (and even recycled some of the old). For the past two years, my husband (who also is my co-reviewer) and I have been so very fortunate to have two Christmases as a married couple with seven incredible children between us. And during these two beautiful seasons as well, we have been privileged to see and review Hartford Stage’s A Christmas Carol: A Ghost Story of Christmas – for us, a new and very special tradition has been born.

Settling into our seats in the lush theatre (it’s one of my very favorites, I might add) I was as gleeful as a child on Christmas morning while we waited for the lights to go down. Based upon the classic story by Charles Dickens which was adapted by Michael Wilson (Hartford’s Artistic Director from 1998-2011), and directed this year by Artistic Associate Rachel Alderman, we were certain this was going to be pure enchantment from start to finish – and it was! We also were well aware of the great import of this season’s celebrated run – it is the seventeenth and final year for the inimitable Bill Raymond to take the stage as Ebenezer Scrooge.

It is clear that as his swan song, Raymond was determined to pull out all the stops in delivering the most memorable performance possible – and for that I’m equally as thrilled that we also were able to gift my parents with a pair of hard-to-score tickets as one of their Christmas gifts. With impish delight, emitting from Raymond’s lips (both loudly and under his breath) were a bounty of grumbles, cackles, chuckles, and rambles – he’s the crotchety old miser you love to hate and hate to love – and only Raymond can do it with such panache and finesse (and quite a bit of humor), while incorporating some lightsaber combat moves that hardly seem out of place in beautifully staged Victorian England. As shiny as the gold coins he hoards, Raymond is my personal gold standard for the pajama-clad, night cap-wearing geezer.

Staying true to its title, Hartford’s A Christmas Carol is indeed ghost story; however, despite its plethora of phantoms and phantasms, the production is family-friendly. The apparitions come from above, below, and all sides, wreaking havoc on the perfectly miserable life of the man who gives nothing and takes everything. That is until his ghostly visits transform him into the kinder man who was buried beneath his own personal heartache and loss. 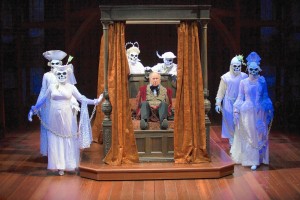 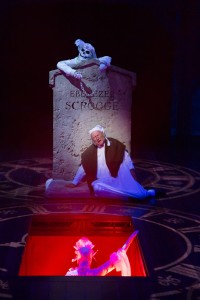 I personally am sad to see Mr. Raymond retire his night cap, but what an incredible run he’s had! Wishing him well in all of his future endeavors, I do look forward to seeing what magic Hartford Stage and Artistic Director Darko Tresnjak have in store for next year’s show because for certain, we’ll be back (and hopefully with our brood, too)!

Tradition: the transmission of customs or beliefs from generation to generation, or the fact of being passed on in this way.

How does a tradition start? It starts from one event which is repeated over and over and eventually gets passed down like the proverbial baton to future generations. Watching Dickens’ A Christmas Carol was a tradition in my household every holiday season and included command performances by every member of the family. We’d sit around the curved television screen on a designated night (no recording back then) and watch Alastair Sim in the 1951 version titled Scrooge (which I still consider the best cinematic interpretation to this day).

We have a new tradition in my family which just started a year ago, but it’s one my wife and I have implanted and intend to involve all of our children at some point. Of course, I am talking about seeing Hartford Stage’s version of Dickens classic: A Christmas Carol: A Ghost Story of Christmas.

Although we are only in our sophomore year of seeing A Christmas Carol at Hartford, it was like returning to a familiar holiday event; one that was anxiously anticipated and ultimately satisfying. The performance directed by Rachel Alderman was flawless. Even having seen it before and knowing what was coming next did not detract from the spontaneity of the live performance. The acting, choreography, staging, lighting, and special effects were brilliantly integrated into this wonderful adaptation of the classic by Michael Wilson.

Hartford Stage, to its credit, has been providing this engaging holiday show for the past nineteen years. Many of the actors and crew people are loyal alumni of past shows. Indeed, the star of the show, veteran actor Bill Raymond, has been donning the Ebenezer Scrooge persona for the past seventeen years and it was an incredible honor to see him perform the role for the last time. His shoes certainly will be difficult to fill. For me, Bill Raymond is to the theatrical Scrooge what Alastair Sim is to the cinematic Scrooge. 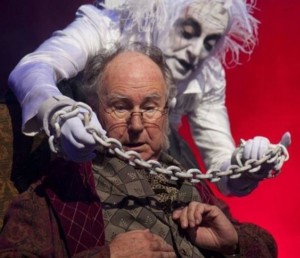 The wonderfully versatile Noble Shropshire absolutely killed it as both Mrs. Dilber, Scrooge’s housekeeper and Jacob Marley. Special shout-outs also must go to Alan Rust (Bert/Spirit of Christmas Present), Johanna Morrison (Bettye Pidgeon/Spirit of Christmas Past), Michael Preston (Mr. Marvel), Robert Hannon Davis (Bob Cratchit), and Terrell Donnell Sledge (Fred, Scrooge’s nephew/Scrooge at 30). This insanely talented cast is too large to mention each by name and my bad for seeming to give them short shrift, but they all are integral to bringing this production to life. The same holds true for all of the people behind the scenes, including Hope Clarke (Choregrapher), Tony Straiges (Scenic Design), Alejo Vietti (Costume Design), and Robert Wierzel (Lighting Design).

A Christmas Carol is timeless. It struck a chord with people in Dickens’ time and still does with the populace at large to this day. Why is A Christmas Carol so popular? I think Mr. Raymond sums it up in his parting farewell salute to his tenure as Scrooge:

“A Christmas Carol has an everlasting freshness that fills the heart with hope and caring. It keeps me fresh, It always will…”