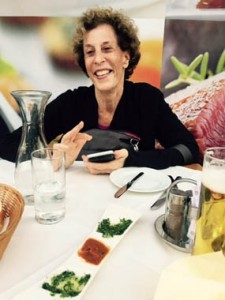 Susan Yankowitz is an award-winning playwright and novelist. Her work encompasses a wide variety of genres and styles — drama, comedy, opera, music-theatre, multi-media — with a special focus on American themes and female characters. Most recently she has been exploring documentary theatre and inter-disciplinary forms that employ puppets, video, and animation. She lectures throughout the country about experimental theatre and teaches privately in New York as a manuscript consultant and script editor. (Susan’s Official Website)

Pillow Talking had the pleasure of sitting down with this extraordinary woman for a lovely brunch at her apartment in New York City. After chatting for hours like old friends and meeting her beautiful family (including her adorably precocious, bespectacled grandson) we followed with a more formal interview so that we may bring a greater bit of knowledge about this intelligent, creative, and fascinating woman to our readership.

Susan, thank you so much for granting us this interview!

PT: Please tell us about your background growing up. What were your educational pursuits and other interests?

SY: I grew up in Newark, NJ with a mother who loved theater and a father who was a lawyer. I was a bookworm and a rebel. Writing was my consolation, my pleasure, and my revenge. When I was twelve, I won a competition with an essay about prejudice which was published in the Jewish News and earned me my first dollar, still pressed into some album or other.

PT: So it was evident from a young age that you not only had interest but talent. Was there a defining moment for you that led you to writing for theatre?

SY: I always knew I wanted to “be” a writer but had never tried to write a play until I was away in India with a boyfriend who was writing plays and suddenly the possibility of that form grabbed hold of me. My first play, “And the Hyenas Laughed,” was written there and earned my entry to Yale Drama School.

PT: So you said your mother loved theater – how immersed was she and how much did she expose your family to the arts and to theatre?

SY: My mother had wanted to be an actress and always loved theater, in particular musical theater. I grew up with the music of Carousel, The King and I, etc. and can sing almost all the songs in my awful off-key voice. My father practiced law all his life. In two symmetries, which occur to me only now, my sister is a visual artist and my brother a lawyer. And my theatrical oeuvre, such as it is, more often than not centers on questions of law and justice.

PT: That’s such an amazing coincidence in some ways. Both of Stephanie’s parents were in the arts (dancers who did performances such as Carousel and The King and I) and Wayne is a lawyer; both of us are lovers of theatre and we find a lot of the law (and Stephanie’s psychology background) creeps into our work. I guess that makes perfect sense in how life imitates art!

So we know a bit about the genesis of Night Sky, but our readers may not. Can you tell us about your early relationship with Joseph Chaikin and how he may have inspired you as a playwright?

SY: Whenever I think of Joe, I think first – I HEAR – his chuckle, which remained with him until his death. Even though we met when I was still in my twenties – or maybe BECAUSE I was still in my twenties – I had little anxiety when Joe asked me to collaborate with him and the Open Theater on Terminal. Though he loved and admired my writing voice, I was not exempted from his rigor. Much of my work had to be revised and rethought. Every night after a workshop I went back to my studio apartment and told myself, You can do this. And I did. Not always for the better – sometimes I was back at the typewriter on the same monologue three or four times – but the process taught me that any piece of writing can be reconceived. It’s like looking at a building from different angles and suddenly seeing something you hadn’t seen before. And working with an ensemble of actors was stimulating and revelatory. I saw how much could be supplied by a gesture or movement or even a silence, and all my work has been informed by that experience. 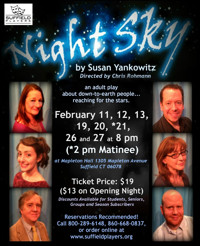 PT: That really is an incredible way of looking at things and really inspires us to take a look at our own work in new and different ways. And we’ve also been told something similar by acclaimed playwright Terrence McNally that a work doesn’t come alive until your actors give it a voice, even in workshops – it is so true.

We saw an absolutely fantastic production of Night Sky by the Suffield Players in Connecticut (see our review). Can you tell us more specifics about the genesis of that play? We know there was a lot that must have gone into that work including issues related to brain trauma, psychology, and astronomy among other things. How much research did you do and did you have experts confer with you in some areas? Of course, we know Mr. Chaikin was the guiding force.

SY: In 1984, during open heart surgery to replace a valve, Joe suffered a massive stroke which rendered him aphasic. At the beginning he was able only to speak gibberish. He couldn’t read or write. His memory for names, places, and numbers was impaired; abstract thought, which had always been his primary form of intellectual inquiry, eluded him. During a long and arduous recovery, he began to assemble a vocabulary and finally, a new means of expression, a language without conventional syntax and often lacking connective words, like prepositions, but nonetheless comprehensible – if one listened. In his frustration, he asked me to write a play about the brain and speech and stars: that was all, but it was the genesis of Night Sky. Of course I consulted speech therapists and astronomers and met other people with aphasia. The more I understood, the more compelling the metaphorical links became. Joe directed the premiere of the play in NYC.

PT: Incredible! We really love it. Stephanie’s psychology background helped a lot in understanding the complex nature of aphasia and the resulting emotional challenges the characters experience, however, it truly is a piece that any layperson can appreciate and even relate to if they’ve ever had a loved one who has experienced any form of disability. We also love how layered the piece is – how did you manage to do that so seamlessly?

SY: I didn’t know I had. But if so, maybe it’s because I am not interested in the unities of time, place, action. They don’t reflect my sensibility, my view of the contemporary world and certainly not the world of a person with aphasia. And they often interfere with the flow of scenes.

PT: We really feel the piece worked so incredibly well – despite the many levels and layers, it all just made sense, yet like a gestalt, the whole really is greater than the sum of its parts.

We have many writers, artists, playwrights who follow us and are always interested in process. What is your process in approaching a project?

SY: It depends on the project.

PT: Fair enough! So what advice would you give to young, aspiring playwrights?

PT: (Laughs) I guess that goes for all of us. It can be a tough business for sure! Aside from your brilliant writing, have you ever considered directing?

SY: For about ten seconds, ten times a year.

PT: (Laughs) So on a different note entirely, do you have an opinion about how the proliferation of social media has affected the industry?

SY: In general, I have to say it has lowered the level of criticism and conversation to ankle level.

PT: We do agree that social media has given anyone and everyone the opportunity to express themselves, and not always in the most beneficial ways.

So, what’s next? Can you tell us what’s on your future agenda?

SY: My opera Thumbprint, with composer Kamala Sankaram, will have its West Coast premiere at LA Opera in June 2017, and another at Opera Ithaca in December 2016. Seven, my collaboration with six other playwrights, has just been translated into Japanese. It has already been produced in twenty-seven countries. www.seventheplay.com

PT: Incredible! You really are so impressive! Are there any new projects you’re working on that you care to share?

SY: I’m in “Searching-for-Producer” mode these days, not a role I love, but I do love my new play and want to see it on the stage, where it belongs. Here’s the title page, which will explain something but not quite everything about it:

THE CRAZY BUT TRUE TRAGICAL-FARCICAL TRIAL OF MADAME P

A Theatrical Bestiary Inspired by Trials of the Middle Ages Wherein

a Sow and Various 4-Legged and Winged Creatures

are Prosecuted for Theft, Murder, Bestiality

and Diverse Crimes Against Humankind

PT: We cannot wait to see more about this! It sounds so fascinating and different!

If you can answer one more question for us, if you could sum up your life to date in one word, what would it be?

PT: That’s phenomenal! We’ve had all sorts of answers to that question, but that has to take the cake!! Hooray for you and hooray for us for having met you! Thank you so much for your graciousness, your hospitality, and for taking the time to speak with us!