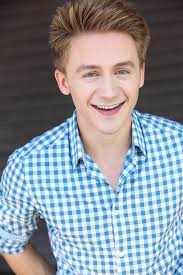 There is no doubt that Riley Costello’s star is on the rise. He can sing, dance and act. He was practically raised on the Broadway boards. Pillow Talking caught up with this busy young actor during his stint in CRT’s How To Succeed in Business Without Really Trying.

Thank you so much for granting us this interview!

PT: The first time we became aware of you was in our interview with Fred Grandy who told us what an incredible young talent you are. We saw it for ourselves at opening night of How to Succeed in Business Without Really Trying. So tell us a little bit about your background. 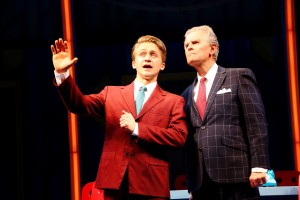 RC: Thank you!! Well, I’ve been singing for as long as I can remember. I started out doing community and professional theatre in my area – I grew up in a small town in the San Francisco Bay Area called Belmont and there is a ton of really great quality community theatre and a very thriving theatre scene in the surrounding towns. I took voice lessons, dance classes, went to theatre camps, you name it. I could never get enough. It was a great place to grow up, I’m very lucky that I had so many options near me.

PT: So you really were immersed! When did you make the decision that you wanted to seriously pursue the entertainment business?

RC: I think I always knew, once I found out that people actually did this for a living. I assumed I would go to college eventually and study theatre and film, but my path ended up being very different and I started working professionally on Broadway at 14-years-old. The only time I remember making a definitive decision to do this for real, was after that first job ended and I had the option to move back home to go to high school, or stay in New York and keep auditioning…The choice was VERY easy.

PT: Wow! Is there theatre or other arts in your family history? Was your family supportive of your decision to pursue the arts?

RC: There really isn’t anyone in my family who has done this. I grew up in a family that appreciated the arts, definitely, but no one is in the business. My family couldn’t have been more supportive of me – I am very lucky in that regard. When I first moved to New York, my parents would switch off every two or three weeks – one of them was with me and the other was with my brother back in California, then they would fly at the same time and switch!! That went on for maybe three, almost four years. Needless to say, I am very grateful to my whole family.

PT: As parents ourselves, we really can’t imagine how they managed that – but what amazing and dedicated parents you have! Obviously that dedication lent itself to your availability to do more exciting projects. What do you consider your big break to have been?

RC: Well there are probably a few answers to that question, and hopefully as my career goes forward, there may be even more, but the one that really stands out is when I did a production of Big: the musical, based on the movie with Tom Hanks. This was a community theatre production and I had a role where I sing this pretty song in Act 2. Someone who had a connection to Jason Robert Brown (who wrote the music for the show 13 that I did) saw the show and emailed him and said something like “Hey there’s this kid in Northern California you should have come in to audition for your show!” and through a series of auditions and emails and trips to LA and New York, six months later, I was on Broadway with that show. It’s a little nuts now when I look back at that, knowing more about how this business works, but then it all just felt like “WOW I can’t believe this is happening!!”

PT: That’s incredible! As creative artists we do know how tough the business is and how challenging it can be to get those big breaks or to be discovered. So you did 13 first and we also know you’ve been on Broadway several times since then. What were those experiences like?

RC: They were each such different and wonderful experiences. 13 was the first show I did and that was such a surreal and exciting time, it was a cast made up entirely of teenagers so it was all of us young performers starting out at the same time. Bye Bye Birdie was the next show I did, that starred John Stamos, Gina Gershon, and Bill Irwin. That show was so much fun to do. Then I did a show called Everyday Rapture which was Sherie Rene Scott’s “one woman” show (though there were others in it). That show was so much fun because I got to listen to Sherie and her two singers (Lindsay Mendez and Betsy Wolfe) sing EVERY NIGHT. That was a treat.

PT: What amazing experiences and what talented people you’ve worked with! We’re admittedly a little jealous!! We actually saw Sherie Rene Scott in Whorl Inside a Loop and loved her and the show!

So, can you tell us how you personally approach a role? What is your process or method if you have one?

RC: I think sometimes it depends on the project. I’ve been very lucky to play some fun comedic roles but I also have played a few more dramatic parts here and there. I truly love doing both, but whether it’s comedy or drama I always approach things from a place of truth. It has to be honest and authentic or the work isn’t as meaningful and I don’t think it reads as well. I’m not a method actor but I do like things to feel as real as possible. This role [I am currently doing], Finch in How To Succeed… is one that I have wanted to play for a LONG time!!

PT: Well, we can honestly say you are spectacular in it! (Stephanie) I saw it on Broadway with Nick Jonas and I can tell you that your performance was perfectly spot on! Just the perfect amount of mischievousness and charm!

Can you tell us what it is like working at CRT and your thoughts about the program they offer where young up-and-coming talent has the opportunity to work with seasoned professionals?

RC: Working at CRT is a dream come true. There are such good people up here who are taking care of us and this theatre puts on such high-quality work. Anyone who sees a show here knows that they can expect REALLY good regional theatre with such cool talent that they bring in. It’s amazing some of the people who have performed here. Having the program where college students perform with professional working actors is a great opportunity for all involved. There’s no sense of “Oh, you’re the college kids, and you’re the professionals.” Everyone is working toward the same goal of putting out good work and everyone is held to the same standard. I’m always learning from everything and everyone around me. I think it’s funny that I’m not that much older than some of the students in the show, so we’re just all friends. I always feel like I learn best by doing. So for the students who are having their first professional job experience here, there is no better way to learn than this, in my opinion.

PT: That’s really great – someone once said, “Never stop learning, because life never stops teaching.” That’s a wonderful attitude and it really applies to everything we do.

We have to tell you, that we think you did a totally show-stopping tap number in How to Succeed…  Where did you train and how long have you danced? Are you trained in other forms of dance? 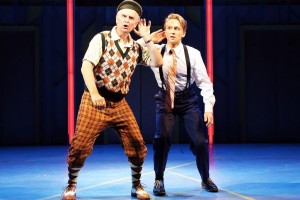 RC: Thank you!! I am trained in a few styles of dance but tap is my absolute favorite. I’ve been tapping since I was eight-years-old, and no other kind of dancing makes me as joyful as tap. I actually assisted some tap classes at Broadway Dance Center in New York for a while with a teacher named Lainie Munro. I was SO excited to hear that we were turning “Brotherhood of Man” into a tap number – I rarely get to tap on stage, so this is a huge deal for me, thank you to Cassie Abate, our amazing choreographer. She texted me about two weeks before we started and told me that this was happening and I probably used hundreds of exclamation points in my reply.

PT: Well all of your training and hard work is clearly evident. That number was such fun and so dynamic! We know how great the show was, but what can you tell audiences to expect from How to Succeed…?

RC: Audiences are going to love this show. There is so much in it to love!! It is one of the great classic American musicals and it won the Pulitzer Prize for drama in 1962. They will love the beautiful Frank Loesser music, the really exciting dance numbers, and laugh until their sides hurt. This show is REALLY funny. Hurry!! We run through June 12th and we want to see you there!!

PT: We concur! Get your tickets and get there!

You are so young, and we know a lot can change over your life and career, but our standard last question is: If you were to sum up your life to date in one word, what would it be?

PT: That’s an awesome answer! We would expect no less from a talented rising star such as yourself! We wish you the best of luck in everything and we KNOW we’ll be seeing perform you in lots of amazing things!! Thank you for Pillow Talking with us! 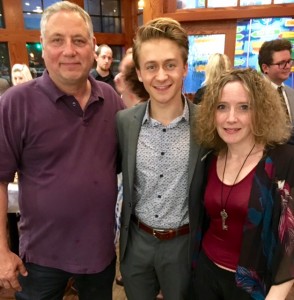