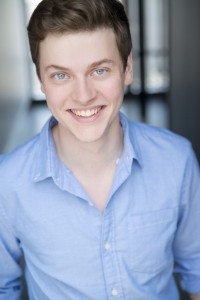 Starring in Peter and the Star Catcher at Connecticut Repertory Theatre

Micahel Doherty was the recipient of the prestigious Barrymore award for his performance in Into Spelling Bee at Theatre Horizon. He recently completed the one-man show Fully Committed at Theatre Horizon. In addition to his lead role as Black Stache in the Connecticut Repertory Theatre’s production of Peter and the Starcatcher, other regional credits include Milwaukee Rep, Utah Shakespeare Festival, Arden Theatre Company and Wilma Theater Pillow Talking also discovered that in many ways Michael is an “old soul.” Read our interview and see if you agree.

PT: Can you tell us a little bit about your background? Did you come from a show business family?

MD: I grew up in a small town in Northeastern Pennsylvania called East Stroudsburg. Didn’t come from a “show biz family,” but I did come from a very supportive one. I started doing musicals in grade school and community theatre when I was nine, and by the time I was choosing colleges, I had decided that I was going to take this acting thing seriously.

PT: (Stephanie) I lived in Pennsylvania for many years and am familiar with that area. So, once you decided you wanted to pursue acting, what kind of training did you have?

MD: In high school, I did a couple of summer programs that got me disciplined about the craft of acting, one of which was the PA Governor’s School for the Arts, a fantastic state-funded arts institute that is unfortunately no longer in operation. I got my BFA in Theatre Arts from the University of the Arts in Philadelphia. Because of that, I received some great acting training and got assimilated into the vibrant Philadelphia theatre community.

PT: That’s terrific! Can you tell us what or who were some of your earliest influences both in terms of music and acting?

MD: Thanks to my dad, I heard a really eclectic mix of music growing up. I was also a total musical theatre and choral music nerd in high school, rocking out a little too hard to Rent and Les Mis. Growing up watching movies, I was really drawn to the comedic minds of Donald O’Connor and Jim Carrey and the straight-up acting chops of masters like Phil Hoffman.

PT: Eclectic, for sure. What do you consider to have been your “big break”?

MD: As a guy rather early in his career (my first professional gig was in 2009), I feel like I’m still “breaking in” in a lot of ways, but there have definitely been lots of watershed moments along the way – signing my first contract, joining Actor’s Equity, or each time I’ve worked in a new theater or a new state. I also just finished a run of my first one-man show (a production of Fully Committed at Theatre Horizon just outside of Philly). I look forward to each new step of the journey and getting to know lots of lovely people along the way.

PT: You appear to still very much have your feet on the ground. That’s wonderful.We know you received a Barrymore Award for your role in The 25th Annual Putnam County Spelling Bee. How was that experience?

MD: Spelling Bee at Theatre Horizon was a pretty magical experience. Lots of talented folks in the room working on a piece that’s as funny as it is moving. It was also directed by Matt Decker, who has become one of my favorite (and most frequent) collaborators. Companies that bond together make good art together.

PT: How true. We have worked with a young group of actors pretty regularly and it is so rewarding to have and feel that mutual respect and bonding with one another. It makes for such a terrific experience.

So, if you have one, can you tell us your process when you approach a role?

MD: I read the script a bunch (as much as I can) before rehearsal starts. I start asking questions on a really macro level: What is the larger story being told here? The more I read, the more I zoom in: What is my character’s journey? Why do they do and say the things they do? Then, it’s getting into the room on the first day of rehearsal and playing with the energies of the artists that are working together. The more specific you get with your questions, the more carved out and nuanced a character becomes. Then it’s releasing all the work and just letting it live.

PT: We can tell you that we’ve talked to some true greats and legends in the business who really feel the best way to bring out the 3-dimensional aspects of both the individual roles and the work as a whole is by taking what each performer brings to the table. That collective energy is what takes a piece from a good one to a phenomenal one. 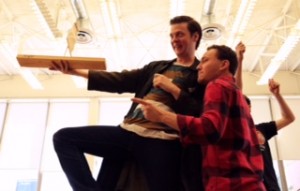 So, tell us, what can the audience expect from Peter and the Starcatcher?

MD: The audience can expect to see a group of really generous and devoted artists telling an imaginative story in some really creative ways. The piece requires its ensemble to create the scenes and soundscapes with their own bodies and voices. It also happens to be one of the most fun rooms I’ve ever worked in. We laugh a lot. I’m excited to spread some of that joy with the audiences who come to see it.

PT: We are really excited to see it. We saw Peter and the Starcatcher on Off-Broadway and can’t wait to have that experience again at one of our favorite theatres, CT Rep. 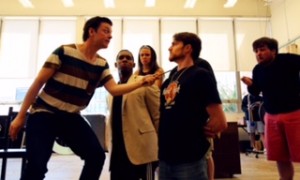 Now, realizing that you are still young and still journeying in your career, what advice would you give to other artists or performers like yourself who are just starting out?

MD: I’d say don’t wait for work to come to you. Put yourself out there. Write. Get together with artists you like. Talk. Make things. Read plays. Create art. Find a way to get your work out there. Meet people. Make connections (real connections like, actually try to connect with people). Audition when you can. Cherish every moment you get to work on your craft. And never stop working on your craft.

PT: That’s great advice. And from someone so young. It’s really a very mature and seasoned-professional way to look at things. Opportunities don’t just happen – we have to make them happen. Do you remember the best advice you ever were given?

MD: One hears it time and time again, but it’s worth repeating: Only you can be you. You are terrifically unique and unlike anyone. Creating a character is a way to share aspects your truest self.

PT: And do you recall what might have been the worst criticism?

MD: Not sure I can recall (maybe I’ve blocked it out). I think when we receive criticism it indicates either that we’re not on the same wavelength as our critic, or that we haven’t done our work to the fullest potential. Or both. Really depends on whom it’s coming from, though. A director’s critique should obviously hold a lot more weight to an actor than a theater critic’s.

PT: Great answer and we agree. What do you do when you’re not acting or performing?

MD: I’ve done some catering and teaching in my day, but I’ve been very fortunate to make a living off of just acting in recent years.

PT: In today’s world, that’s an accomplishment all its own. What’s on your future agenda?

MD: Find more exciting projects to do and work my butt off for them. I recently started working with an agent in New York, so I’m excited to develop that relationship. I also recently moved in with my girlfriend (also an actor) and I’m looking forward to every moment we get together.

PT: If you were to sum up your experiences (we ordinarily say “your life,” but you are quite young!) to date in one word what would it be?

PT: What a wonderful way to look at life and your budding career in entertainment! We hope to see your star continue to rise! Thank you for a great interview!!